Many still insist Russell Wilson isn’t an elite quarterback, but his two-year numbers stack up favorably against those at similar points in their NFL careers. 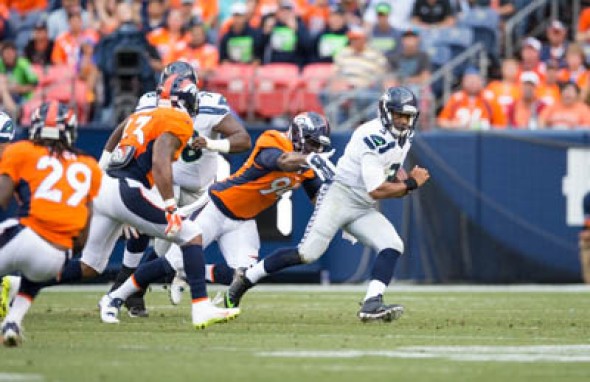 No NFL quarterback now considered “elite” did better than Russell Wilson did during his first two seasons in the league. / Drew McKenzie, Sportpress Northwest

Still suspicious of his size, uncomfortable that he is not a classic pocket passer, many pundits who chronicle the National Football League remain reluctant to make space for Russell Wilson in the pantheon of the game’s elite quarterbacks. Typical of the apprehension to elevate Wilson was a recent story posted on CBSSports.com that observed, “the race to put Wilson among the league’s best has gone way too fast.”

The story went on to say, “As you know by now, I like my quarterbacks sitting in the pocket, making reads, and going through progressions, which is why I am hesitant to rush Wilson up any list of the best. Wilson did some of that last season as the Seahawks won the Super Bowl, but he didn’t do enough of it to vault him into the league’s top 10 quarterbacks in my mind.”

No one in Seattle, where Wilson enjoys icon status, is going to buy Pete Prisco, author of the post, a drink. Even NFL players disagree with Prisco’s assessment. Every year, NFL.com asks players to rank the best in the game, regardless of position, from one through 100. This year, Wilson came in at No. 20 and fifth among quarterbacks behind Peyton Manning (No. 1 overall), Tom Brady (3), Drew Brees (6) and Aaron Rodgers (11).

It’s hard to take issue with Manning at No. 1, but Rodgers at No. 4 (among quarterbacks) is a bit of a dis. Among Super Bowl-era quarterbacks, Rodgers, who faces off against Wilson in the season opener Thursday night at the Clink, ranks No. 1 in passer rating (104.9 to Manning’s 97.2), yards per pass attempt (8.2), touchdown percentage (6.4) and interception percentage (1.8).

Wilson hasn’t spent enough time in the NFL to qualify for inclusion on career leaderboards. But his numbers stack up favorably when compared to those produced by Rodgers, Manning, Brady, Brees and Luck in their first two seasons in the league, as the following shows (for Rodgers and Brady, the numbers are their first two full seasons):

Wilson is 1-0 head-to-head vs. Rodgers, 1-0 vs. Manning, 1-0 vs. Brady, 2-0 vs. Brees and 6-0 overall against quarterbacks who have won a Super Bowl, his other victory coming last year against Eli Manning. Not too shabby for a so-called “game manager,” a dismissal frequently applied to Wilson. 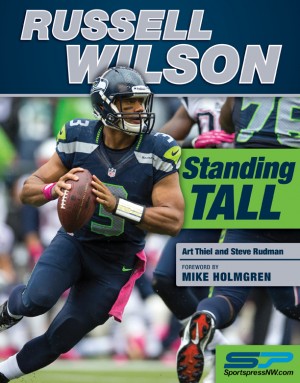 “Russell Wilson: Standing Tall” is available wherever books are sold in the Puget Sound area, and amazon.com.

Note that Wilson has a higher passer rating after two years than any of the quarterbacks listed had after their first two. His yards per attempt (8.1) and yards per completion (12.7), two of the key stats for measuring quarterbacks, also heads the list. And look at that touchdown percentage (6.5). It’s a full point better than Rodgers posted (5.4) after two seasons in the league.

Wilson has accumulated his numbers despite playing behind a leaky offensive line that allowed 77 sacks over the past two seasons. If Wilson isn’t yet a classic pocket passer, it’s largely because, to this point in his career, he has had little choice but to bust out of it in order to make plays. And he makes them.

Last year, Wilson completed 48.3 percent of his passes (27-for-60) that traveled  20 or more yards, a tick ahead of Manning’s 48.2, for the best mark in the league. Brees completed 40.7, Brady 39.4 and Luck 36.7 (Rodgers didn’t qualify due to injuries). And the thing was, no other quarterback in the NFL weathered the pressure that Wilson did. He was hassled, hurried and hit on a league-high 43.8 percent of his dropbacks.

Luck was pressured on 37.5 percent of his dropbacks, Brady on 32.6 percent, Brees on 29.8 percent, and Manning a league-low 22.7 percent. Manning’s quick release and the Broncos short passing game kept him upright and healthy, although it proved vulnerable in February.

If Wilson isn’t yet an elite quarterback, he is certainly growing into one, which is why Art Thiel and I wrote a book about it: “Russell Wilson: Standing Tall.” Order a copy here.