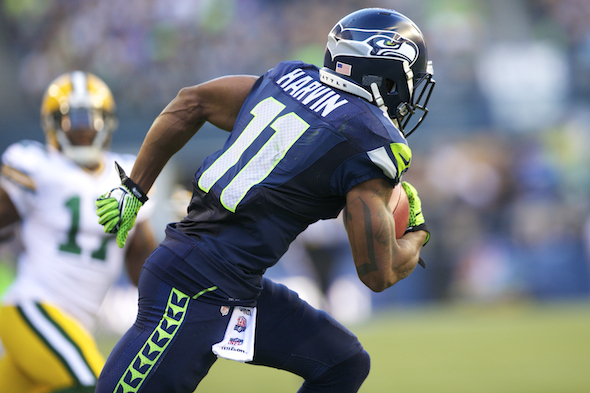 No “Fail Mary” required this time. Although the Seahawks didn’t come close to replicating their Super Bowl domination of the Denver Broncos, they launched defense of their NFL title Thursday night at CenturyLink Field with a 36-16 romp over the error-prone Green Bay Packers, themselves a popular pick to reach Super Bowl XLIX in February.

With the score 10-10 in the second quarter, the Seahawks reeled off 19 consecutive points and won going away with an array of contributors.

“I’m just really pleased with this night,” said head coach Pete Carroll. “Everybody had so much fun. We had some great things going on (in preseason) and I was hoping it would carry over and it did. It was a really good start for us.”

Quarterback Russell Wilson completed 19 of 28 for 191 yards, two touchdown passes and a 110.9 passer rating. He also ran for 29 yards. Marshawn Lynch ran 20 times for 110 yards and a pair of scores, and the Seahawks’ defense created its usual mayhem. If not for a muffed punt by Earl Thomas in the first quarter that set up Green Bay’s first touchdown, this one might have been an epic rout.

The biggest takeaway from the opener was the impact that Percy Harvin seems destined to have — barring injury — on Seattle’s offense. The Seahawks employed him as a runner and a receiver and the Packers had no answer, in fact flailing to contain him. Harvin rushed four times for 41 yards, caught seven passes for 59 with a long gain of 33, and returned three kickoffs for 60 yards. His speed overwhelmed Green Bay.

“He’s just such a fantastic player, such an explosive athlete,” said Carroll. “What a terrific guy to add to this football team. Percy was just on it.”

“We just tried to stay on schedule,” said Harvin, who didn’t become a factor for the Seahawks last year until late in the year due to hip surgery. “We got off to a great start tonight, we converted on third downs and took care of business. This year, we’ve got a few more weapons on offense, and it turned out great for us.”

The first scrimmage play of Seattle’s season, a pass from Wilson to Harvin in the flat, set the tone for the Seahawks, who amassed 398 yards of offense to 255 for the Packers and held All-Pro quarterback Aaron Rodgers to 189 yards, one TD, one interception and an 81.9 rating. Rodgers didn’t throw once in the direction of All-Pro corner Richard Sherman.

“To keep Aaron down like that, I’m really excited about that,” said Carroll. “But I’m just as excited about how we ran the ball.”

The Seahawks pounded out 207 yards on the ground — 5.6 per attempt — and held the Packers to 80 rushing yards, 34 by Eddie Lacy, last year’s Rookie of the Year. Seahawks linebacker Bobby Wagner led the way with 14 tackles.

“We played a great game,” said Wilson. “Defensively we were lights out. Our physical running game showed up and we did a good job in the passing game. Our goal is to have that balance and we definitely did that tonight. We’re just getting better, that’s the goal.”

The Seahawks went up 3-0 on a 35-yard Steven Hauschka field goal, fell behind when the muffed punt return by Thomas resulted in Green Bay’s first touchdown, took a 10-7 lead on Wilson’s 33-yard TD to Ricardo Lockette, and then ceded a 23-yard field goal to Mason Crosby.

From there, the Seahawks ran away with it, recording their sixth consecutive victory in a home opener.

The Seahawks play at San Diego Sept. 14 with a 1:05 p.m. kickoff on FOX. They return to CenturyLink Field Sept. 21 to face Peyton Manning and the Denver Broncos in a game that will kick off at 1:25 p.m. on CBS.