A healthy Percy Harvin, injured most of the past season following hip surgery, gives the Seahawks one of the scarier offensive weapons in the NFL. 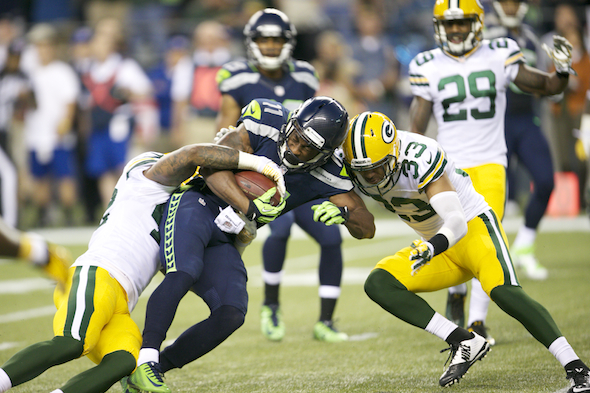 Don’t be surprised if a few of the more enterprising Twelves (perhaps many of them) seize upon an extemporaneous quote by Russell Wilson on NBC following Thursday night’s blowout victory over the Green Bay Packers and plaster it all over T-shirts, mugs, bumper stickers, stadium signs and even bare chests. It’s just too good to pass up: “Lord have mercy, we’ve got Percy.”

Do the Seahawks ever. In front of a frenzied CenturyLink throng of 68,424 aching for the defending champions to administer Aaron Rodgers, et al, a severe beat-down, Harvin did it all. He caught seven passes for 59 yards. He rushed four times for 41. And he took back three kickoffs for 60. Fourteen touches, 160 yards. He barely seemed to sweat.

He took only 39 snaps from scrimmage, yet he seemed everywhere.

“They can’t stop him,” Seahawks middle linebacker Bobby Wagner told reporters in the afterglow. “They can’t tackle him. He’s too fast to catch him. He’s just a great player when he’s healthy.”

“He’s just such an explosive athlete,” Pete Carroll added post-game. “We had a ton of different ways to show how we’re fitting him into our offense. It’s what we’ve been hoping for. There’s a bunch of other stuff that we’ll do. We’re just getting started.”

Harvin’s three catches in the first quarter exceeded his total from the 2013 regular season (one), and he led all receivers with 38 yards after catch (as many as Jordy Nelson and Randall Cobb combined for the Packers). But of more intrigue was that Harvin turned four rushing attempts outside the tackles into 41 yards.

Seahawks wide receivers COMBINED for 35 rushing yards during the 2013 regular season and playoffs.

In fact, go back through the entirety of CenturyLink Field’s existence (since 2002) and Harvin’s 41 rushing yards against Green Bay Thursday night topped the  full single-season totals of all Seahawks wide receivers combined with the exception of Koren Robinson’s 56 yards during eight games in 2002 (games = number of games with at least one rushing attempt):

Harvin’s 41 yards did not establish a single-game record by a Seattle receiver. In 1995, then a rookie, Joey Galloway ran 86 yards on a reverse at Jacksonville and had 54-yard run the same season against Denver. In 11 rushing attempts that year, Galloway produced 154 rushing yards. Galloway also had a 51-yard run at Jacksonville in 1996 and a 44-yard reverse against Oakland in 1997.

But Galloway’s plays were essentially one-offs and, as Carroll pointed out, he intends to weaponize Harvin in a variety of ways every game.

No wonder Wilson blurted, “Lord have mercy, we’ve got Percy.” Harvin makes the Seahawks offense scarier than ever, especially considering that he barely had to sweat to get the yards he got.

In part because of Harvin, but mostly because of Marshawn Lynch, who produced his 20th 100-yard game in three seasons, the Seahawks rolled up 207 rushing yards, most in a season opener. In 1986, the Seahawks opened with a 30-0 victory over the Pittsburgh Steelers, a win fueled by 202 rushing yards.