The Seahawks’ depth in the secondary took a hit Thursday when CB Jeremy Lane  reinjured a groin muscle in the third quarter of the win over Green Bay, while fellow CB Tharold Simon underwent successful arthroscopic knee surgery to repair … 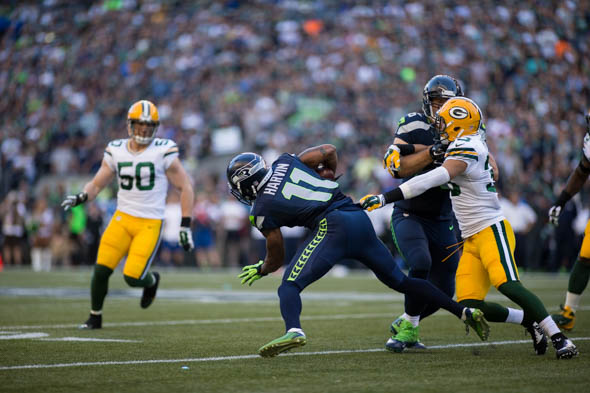 Percy Harvin was a hard man to get a hand on for the Packers Thursday night. / Drew McKenzie, Sportspress Northwest

The Seahawks’ depth in the secondary took a hit Thursday when CB Jeremy Lane  reinjured a groin muscle in the third quarter of the win over Green Bay, while fellow CB Tharold Simon underwent successful arthroscopic knee surgery to repair cartilage damage.

Lane “will be down for awhile,” coach Pete Carroll said Friday after Seattle’s 36-16 triumph, and said Simon probably will be out the four weeks that is typical for such scoping procedures.

That means the Seahawks will have lightly experienced DeShawn Shead and newcomer Marcus Burley backing up Richard Sherman and Byron Maxwell when they play the Chargers in San Diego Sept. 14 – unless they go outside for help.

“There’s some stuff we’ll be working on here,” Carroll said regarding adding personnel. Burley, who had no NFL game experience, was already an emergency hire, costing a 2015 sixth-round draft pick to get him from the Indianapolis Colts the Sunday before the opener.

Whoever is added likely will find lots of work on the half of the field not occupied by Sherman, who had no passes among 33 thrown by QB Aaron Rodgers targeting his side of the field. Since that was Rodgers’ favorite side, the Packers’ reluctance to challenge Sherman was the highest possible opponent compliment, even though Carroll had to explain that to Sherman, who didn’t show up on the official sheet of defensive stats.

“We talked about it,” Carroll said. “He’s an extraordinary competitor and wants to be part of things. He felt he wasn’t part of it, but he was. That happens at times with great cornerbacks.”

Carroll said the temptation is to leave an assignment to go after the action, but credited Sherman for staying disciplined. Maxwell was picked on early by Rodgers. Pro Football Focus reported that completions were made eight times in 10 targets to Maxwell’s side, and he had two passes defensed and an interception.

“Guys can be flipped (switch sides); there are reasons to do that, and it might come up in the season,” Carroll said. “But there are no reasons to do that yet. I was really proud of how (Maxwell) played. The balls caught on routes (to Maxwell’s) side would have been caught on anyone. He stood up to the test.”

“He did well,” Carroll said. “He had a really good challenge route down the field and did a nice job (when Randall Cobb) got up on him and knocked the ball away — it was a beautiful play. He’s looked really solid in practice and we really liked the kid coming in.”

Regarding the offense,  besides the obvious contributions of WR Percy Harvin, RB Marshawn Lynch and QB Russell Wilson, Carroll cited the line work of tackles Russell Okung and rookie Justin Britt, as well as the blocking of TE Zach Miller and FB Derrick Coleman.

He also was impressed with LG James Carpenter, who won numerous coaching plaudits in the preseason for improving his game.

“Carp really did well,” he said.  “He was very aggressive and confident. He’s at top of his game. Did you see him coming off the field? He comes flying off to the sidelines. He’s in superb condition.”

Carroll said he was sticking with Earl Thomas as the punt returner despite the lost ball that set up the Packers’ first touchdown. “He should have made a fair catch,” Carroll said, while acknowledging that Thomas was bumped by a Packer defender who was pushed by Sherman’s attempt at a block. He said Thomas won’t take every punt, but “We’ll have him in when we need to. Earl has yet to get a lot of reps.” . . . Bruce Irvin had 19 snaps mostly at defensive end, which pleased Carroll since Irvin had only two full days of practice after recovering from hip surgery. The plan is to play him about half the game in San Diego, then full time, including the rush LB spot . . . Players have the weekend off before resuming practice Monday.