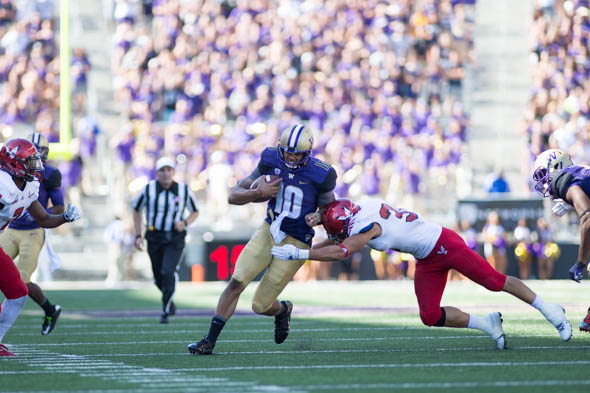 Quarterback Cyler Miles ran for three touchdowns and passed for another as Washington won its season home opener in a 59-52 squeaker over Eastern Washington. / Drew McKkenzie, Sportspress Northwest

The University of Washington coughed up a 21-point first-quarter lead, weathered a record seven touchdown passes from Eastern Washington’s Vernon Adams, and barely held on to defeat the rambunctious FCS Eagles 59-52 Saturday at Husky Stadium. Although new UW head coach Chris Petersen recorded his first win in the facility, his penalty-prone Huskies nearly handed him a stunning defeat.

Washington needed two short touchdown runs from quarterback Cyler Miles and a key turnover in the fourth quarter to lift the Huskies from a 45-44 deficit to their second win of the season.

“I hope the fans liked it,” said Petersen. “My hat is off to Eastern. They aren’t a fluke. They’re good and they played good. I’m really proud of our offense; we made a lot of strides and improvement (from last week) But we’ve got to play better than that. Last week, we played good defense and this week we flipped it. Hopefully, we can put two good sides together.”

“I’m just happy we got away with the win,” said Miles, making his first start of the season after serving a suspension. “We just keep need to believing in each other. I give a ton of credit to them (Eastern). That’s a great team and they play hard. Now, we just need to stick together.”

Miles, who started in place of Jeff Lindquist, who started the opener at Hawaii, ran for three touchdowns (58 rushing yards) and threw for another as the Huskies rolled up 356 rushing yards, including 118 and a touchdown by Lavon Coleman. But Miles threw for only 180 yards, 55 of which came on one TD play to John Ross.

Ultimately, in a game that featured 1,190 yards of track-meet type total offense, the Huskies were able to wear down the Eagles with their running game, but not before Adams torched them with an opponent record seven touchdown passes, including three to Cooper Kupp.

The game started off looking like Washington would rout the Eagles. The Huskies tallied three touchdowns in the game’s first seven minutes, the last of which came via a 57-yard burst from scrimmage by two-way star Shaq Thompson.

But then Adams, who finished with 475 yards, went to work. He threw touchdown passes of 41 (Kupp) and 33 yards (Kendrick Bourne) to close out the first quarter, slicing Washington’s lead to 24-14. Adams threw two more touchdowns by halftime, which ended with Washington leading 37-31.

Adams fired two more TDs in the third quarter, his sixth of the game at the 2:46 mark giving Eastern a 45-44 lead. With Washington ahead 52-45 after Miles’ first rushing TD of the fourth quarter, the Eagles were driving for the tying touchdown when, in a game of many big plays, the biggest occurred.

With Eastern facing a second and 10 at the UW 32, Adams completed a 16-yard pass to Terence Grady at the Washington 15-yard line. But Washington’s John Timu stripped the ball loose, Travis Feeney recovered it and returned it 19 yards — a play that put an end of EWU’s hopes, athough Adams still had one more TD pass in him with four minutes left.

The Huskies were penalized 10 times for 100 yards, several of the flags extending EWU drives. An unsportsmanlike conduct flag on DB Marcus Peters helped set up Adams’ 22-yard TD to Cory Mitchell in the third quarter that gave EWU a 45-44 lead. Petersen exiled Peters to the bench, and Peters did not return.

“No game should be taken lightly,” Coleman said.

NOTES: Adams, who threw two touchdown passes on fourth-down plays, not only became the first Husky opponent with seven TDs in a game, but the first with six. The previous record of five was shared by Tom O’Connell, Illinois, 1952; Jack Thompson, Washington State, 1976; Kyle Boller, California, 2002; and Sam Bradford, Oklahoma, 2008 . . . Washington scored 24 points in the first quarter, four shy of the school-record 28 against Idaho in 1969 . . . Miles became the first UW quarterback to rush for three touchdown in a game since Keith Price in the 2011 Alamo Bowl against Baylor . . . Eastern featured two 100-yard receivers, Kupp with 145 yards and Bourne with 114.

NEXT: The Huskies play the second of three consecutive home games next Saturday, hosting Illinois at 1 p.m.