Thiel: Huskies’ victory was one nobody liked

Broken tackles, blown coverages and foolish penalties by the defense made the home debut of Chris Petersen an awkward one, but not disastrous. 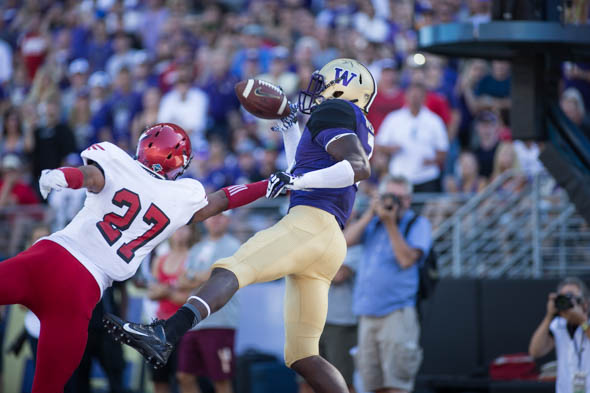 A little nervously, Chris Petersen looked upon the media horde in the Husky Stadium team-assembly room. After his first home game as University of Washington football coach, he smiled the awkward smile of the soup-slurper at a state dinner.

“Did you like that?” he said, more hopeful than curious. Big-city media protocol demands neither yays nor boos. But silence would have greeted him had he hosted several generations of UW fans, who prefer their football circus when it features elephant acts instead of clown cars.

Perhaps LB John Timu had a better handle on the moment.

Endlessly, it is said that there are no style points in football, or anywhere in sports outside figure skating. It’s always true. It is also true that the Pac-12 Conference isn’t the Big Sky, or Mountain West or Western Athletic or any other outfit that plays 52-card pickup and tries to call it poker.

Washington beat Eastern Washington 59-52, but it felt as mindless as reality TV. Really, the story would have been better had the Eagles won, because an FCS school vanquishing the big-brother BCS school would have had great underdog storylines of disrespect, fulfillment and joy — you know, the full Pete Carroll.

Instead, the Huskies, who blew a 21-0 lead at home to trail 45-44 entering the fourth quarter, came up with a rare turnover deep in their own territory to change the game. There was no joy in victory, and little solace for Eastern, which beat Oregon State last year and was on the verge of planting a territorial flag in its home state against the program that most all of the players wanted to attend.

“You’re on the road in a Pac-12 stadium and things don’t go well early,” said coach Beau Baldwin. “I was most proud of where we fought our way back to take the lead. That says s lot about our mental makeup and our toughness.

“It would have taken just one or two plays there.”

That’s about it — one or two plays separated the proud tradition of Washington and the big city from the small-town college in the wheatfields. Eastern has been near the top of the smaller-school division for five years, and after Saturday, they probably won’t get another big-boy game for 25 years (“best pound-for-pound fighter . . .”).

The Huskies defense was nearly helpless against QB Vernon Adams, a six-foot, 200-pound junior from Pasadena who danced around rushers and looped passes over defenders in one of the greatest opponent days in UW history — seven touchdown passes and 475 yards passing. Only the six sacks by Washington thwarted him and staved off the upset.

“He stayed in the pocket when he had to, and ran when he had to,” said Timu, shaking his head. “He’s really good. But our defensive technique . . . we just fell apart.

That is probably the most damning thing for Petersen and his coaching staff: For all the credit they have received for detail and precision, of which there were glimpses in Hawaii, the defense couldn’t play man or zone, didn’t know when to blitz or drop, and worst of all, couldn’t behave themselves.

The most critical of the 10 penalties for 100 yards against Washington were on defense, none worse than in the third quarter when UW was up 44-38 and appeared to have stopped Eastern on a third-and-9 at their own 36 with a sack of Adams by Shaq Thompson. But CB Marcus Peters, one of the team leaders, was busted for taunting. The 15-yard penalty restored the drive and led to a touchdown and 45-44 lead that went on TV screen crawls across the country and caused a seismic drop of jaws.

The foul caused Petersen to bench Peters for the rest of the game and leave an already infant secondary even more embryonic. He didn’t blink at banishing his best pass defender.

“That was easy,” Petersen said. “I’m not into stupid penalties. That wasn’t even a decision (to bench Peters).”

The decision was not fatal to the day’s events because the offense, behind a dynamic day for starting QB Cyler Miles, rescued the defense. After special-teamer Brian Clay recovered an onside kick at the Eastern 48, Miles took Washington nine plays for the go-ahead touchdown, which he scored on an option keeper from five yards. A two-point conversion pass to Kasen Williams made it 52-45.

Then the defense finally had a little payback. Eastern reached the Washington 32, from where Adams completed a 16-yard pass to WR Terence Grady. But Timu reached in and knocked the ball out and into the arms of teammate Travis Feeney, whose 19-yard fumble return set up Washington at the 35.

Thereafter, Washington ran the ball 11 times in the next 13 plays, including the final three by Miles for the touchdown that finally broke Eastern.

It was part of a 356-yard rushing day. Freshman Lavon Coleman did most of the work on the drive and the day, putting up 118 yards and a touchdown. The seven scores on the ground tied for the second-most in school history.

The rushing game was one positive for Washington, which included LB Shaq Thompson for all three plays in a second-quarter series, the final of which went 57 yards for a TD.

The game may have been a clown car, but it was not with some virtues for Washington. Yet for a second week in a row, the mysteries outweigh the majesties by a considerable amount.