Unexpected defeats leave Cougars suddenly on the edge of a seasonal disaster. Leach needs a miracle or two to restore his credibility. 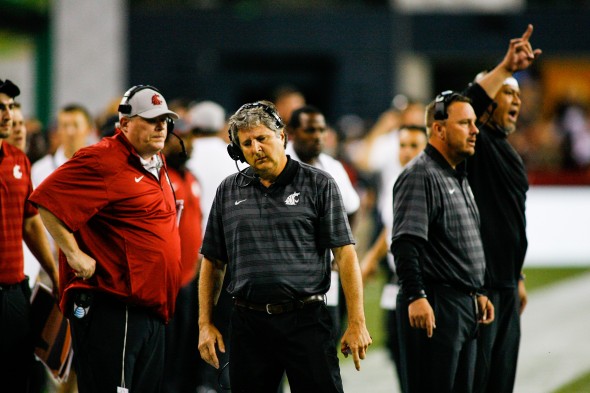 Watching Mike Leach and his coaching staff rebuild the Washington State football program is not unlike watching a toddler learn to walk. You know: One step forward, two steps backward, one step forward, splat!

A little perspective may be order, given the Cougars’ surprising – nay, shocking – 0-2 start. Yes, there are plenty of negatives to be spewed, but just as many positives. Honest. In fact, we can think of at least 10 of each.

Negative No. 1: WSU is averaging 22 rushing yards per game.

Positive No. 2: The Cougars have gained more total yards than each of their opponents.

Negative No. 2: The Cougars had more turnovers, penalties, sacks allowed and field goals missed than each of their opponents.

Positive No. 3: Since giving up a 78-yard touchdown pass on the first play from scrimmage in the season opener against Rutgers, the Cougars have yielded only 313 passing yards.

Negative No. 3: Each WSU opponent has rushed for more yards on one play (56 by Rutgers, 55 by Nevada) than the Cougars have rushed for in both games combined (44).

Positive No. 4: Coach Mike Leach, two games into his third season at WSU, has won as many games (nine) as predecessor Paul Wulff won in four years.

Positive No. 6: The Cougars have given up 27 or fewer points seven times in the past 14 games.

Negative No. 6: The Cougars have given up 41 or more points six times in the past 11 games.

Positive No. 7: WSU’s first game at Martin Stadium is next Saturday against Portland State, a Big Sky Conference team.

Positive No. 8: WSU is 17-0 against current Big Sky Conference teams since losing at home to Montana in 1947.

Positive No. 9: The last time the Cougars started 0-2, they defeated Southern Methodist in the third game of the 2009 season.

Positive No. 10: Washington State returns a solid core from last season, when the Cougars made their first bowl appearance in 10 years.

Negative No. 10: The Cougars have lost the first two games of the season 19 times. None of the previous 18 teams rebounded from an 0-2 start to finish with a winning record.

The latter fact is a cold splash of water in the face of Cougars everywhere. Not that WSU football fans have not grown accustomed to failure in recent years, but this year was supposed to be different. Way different.

Leach himself declared this to be his most talented team in Pullman. Senior quarterback Connor Halliday will leave Washington State with virtually every passing record in school history. WSU has one of the deepest and most talented groups of receivers in the nation.

Of course, everyone knew the inexperienced offensive line, secondary and kickers were questionable. All those units have been spotty, and Halliday – he of the huge heart but skinny body — has already taken some vicious hits. The experienced front seven has been outmuscled in both games.

If Halliday goes down, the Cougars could easily go 0-9 in the Pac-12. Even with Halliday, an 0-9 showing cannot be ruled out. The Pac-12 is that good. The Cougars might be that vulnerable.

The spotlight is squarely on Leach. He arrived in Pullman with unprecedented hype, but he has failed to live up to that hype. He says the Cougars lack a winning culture, but he is hardly the first coach to inherit such a malady. For $2.75 million a year, the Cougars expect a minor miracle or two.