A crowd of 15,617 showed up for Monday night’s Mariners game. Pennant fever? Hardly. But the scar tissue runs thick and deep in Seattle. 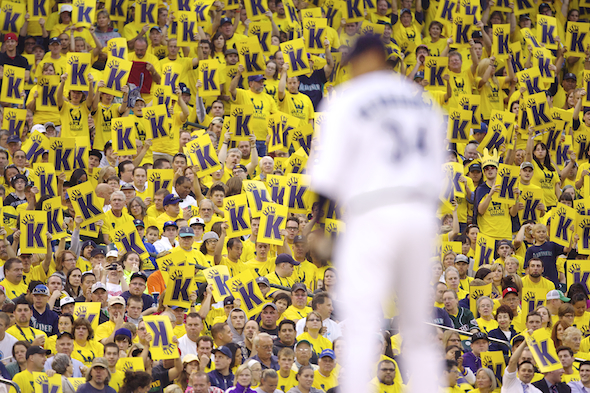 It’s after Labor Day and, for what seems like the first time Yesler Way was Skid Row, the Mariners are playing relevant baseball. They began Monday night virtually locked up with the Detroit Tigers for the American League’s second wild card berth, and two games behind Oakland for the first berth and its home field advantage.

The arrival of contention, 13 years removed from Seattle’s last playoff appearance (which for those of you who mark time via software, was three years before the launch of Facebook) was worthy of a brief team chat as the Mariners began their most recent road series in Texas.

“I told them, ‘Play your asses off and enjoy the journey,'” manager Lloyd McClendon recalled before Monday’s 4-1 win over Houston at Safeco. “That’s all.”

Robinson Cano, who as a Yankee likely has experienced more playoff games than the rest of the Mariners’ roster combined, was similarly low key.

So for those who may be shocked/dismayed/perplexed by the fact that 15,617 showed up for one of the biggest games in years — Happy Felix Day, no less — feel free to listen to McClendon and Cano: It’s not early, but it’s also not late.

It could be argued, however, that since McClendon and Cano are in their first years in Seattle, they can’t possibly grasp the enormity of the cosmic ache fans have felt in watching season after season die by Memorial Day.

But the counterargument is this: Mediocrity in sports breeds contempt.

After eight losing seasons in the past 10, the bond for many has been broken. In the 2002 heyday, when 23,000 season ticket holders guaranteed a passionate throb every night and helped make sellouts plentiful, the sports populace was fully engaged. You know, like now, when Seahawks fans who didn’t know what a practice squad was two years ago debate the merits of a special-teams gunner from Wossamatta U.

Now, with erosion of the season-ticket base to around 7,000, those who made the often difficult decision to give up season tickets that sometimes take on the feel of a family heirloom, built up some resolve too. They want their decision to mean something, and a way to do that is by sticking with it until given compelling reasons otherwise.

For them, this season isn’t compelling. Yes, 78-64 is a good record, and baseball writers around the country will tsk-tsk Seattle fans for not showing up to celebrate the achievement. But writers are forever in search of familiar storylines, and the bedraggled outcast coming into the light is one of the most favored September fairy tales.

That doesn’t matter muchg to fans who for years have given money and time to an unrequited passion. They remain pissed off. They see players and managers come and go without apparent plan or accountability, and watch as teams with fewer resources catapult over a wealthy franchise and into the postseason.

The story is well-known locally, so no need for re-hash. Nor do I think I there’s anything special or different about this fan base than, say, Cleveland or Toronto. As did Seattle, those cities led baseball in annual attendance in the 1990s when their parks were new and the teams good. Then came the droughts, and the passions dried up.

To be fair about this one game, it was Monday, it was dreary and it was the Houston Astros, who’ve lost at least 100 games in each of the past three seasons. Plus, there were not one but two NFL Monday Night games on TV. Since the Mariners and MLB no longer are young and handsome in this town, another pretty boy has swooped in to steal sports hearts.

Still, it’s incremental. The Mariners have been a bottom-third team in wins and attendance for too long, relative to franchise wealth. The re-embrace is going to take longer.

The Mariners came to life in a season when three American League powerhouses, the Red Sox, Rangers and Yankees, who have won six of the past 10 AL pennants, faded. The Mariners can’t control that; to their credit, they did take advantage.

Nor can the players do anything about franchise history. All they can do is follow McClendon’s instructions: Play their asses off, and enjoy the journey, as they did Monday.

Also: Be patient. The scar tissue is thick.