MLB commissioner Bud Selig, the stealer of the Pilots, passed through Seattle on his way to retirement, blessing the Mariners as the season’s surprise team. 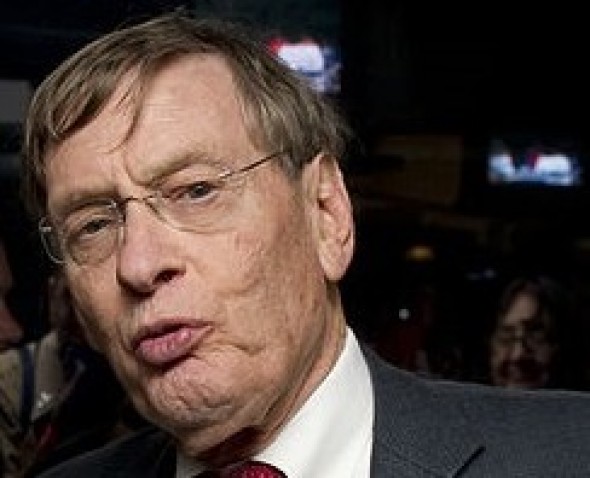 Bud Selig was in town Wednesday for a final time as commissioner — barring a World Series appearance, of course. / Wiki Commons

As is Derek Jeter, Bud Selig is making something of a national tour prior to his retirement in January as major league baseball commissioner, a post he has held since before the invention of the steam engine. The amount of belovedness showered upon Selig, however, is slightly less than that for the Yankees shortstop, especially in Seattle, where he will be forever known as the man who smuggled the 1969 Pilots to Milwaukee.

Selig was in Seattle Wednesday for a low-key, farewell visit to Safeco Field, where he talked to the front office and then met media types before the Mariners-Astros game. No field ceremony was offered up, perhaps a response to the last time he was introduced some years ago.

“I was booed, lightly, but booed,” he said. CEO Howard Lincoln and president Chuck Armstrong were upset at the reception until the light bulb went off.

“Somebody remembered,” he said, “that I was the guy that stole the franchise.”

Well, hey, give the man credit. At least he finally admitted it.

But that was 45 years ago. The Pilots begat the Brewers, Pilots litigation begat the Mariners, and everybody lived happily ever after, right?

“Everything worked out,” he said. Well, not exactly. But hey, he’s 80, he’s entitled to remember it as he wants.

Controversy has swirled about the commissioner practically since his stewardship began, and with another Seattle dust-up at the beginning of his tenure.

In January 1992, Hiroshi Yamauchi, a Japanese billionaire, bought a majority interest in the Mariners from Jeff Smulyan, who had been covertly encouraged by some owners to pull the sorry franchise out of Seattle to Tampa. Not that Selig, who had pulled a team out of Seattle 22 years earlier, would ever have suggested such a thing.

But the owners were seriously chapped when some foreigner proposed to own a piece of Americana, especially when a robust Japanese economy at the time allowed entrepreneurs to buy other U.S. icons such as Pebble Beach golf course and Rockefeller Center.

But after a six-month shaming by many in America, especially in the Puget Sound area, where a big chunk of the economy was driven by exports to Japan, owners approved the sale.

“Baseball is always slow to change,” Selig said. “There were concerns about how it would work without an owner who didn’t go to any games.”

Well, it did prove  awkward, but  hey — fans apparently are still waiting for a team to show up in Tampa.

Three years later, Selig was up to his shrugging shoulders in another crisis in Seattle, this time about building a replacement for the Kingdome, which began falling apart at nearly the same time as baseball’s labor negotiations fell apart — for the eighth time in 20 seasons.

“I remember (the stadium fight) very well — a myriad of conversations with Chuck and  (chairman emeritus) John Ellis,” Selig said. “It was tough there for a while, but all’s well that ends well. The timing of ‘refuse to lose’ was remarkable.”

A new stadium was built by 1999, the Mariners made the playoffs four times in seven years, and all seemed well in Seattle. But another win drought ensued, 13 years worth. And only this month is there hope for an end, with the Mariners actually in contention for the postseason.

Selig says the Mariners success is the upset of the year (that was said before one of the most woeful losses, 5-2 to the Astros and a kid pitcher making his major league debut).

“People don’t want me to tell you this,” “he said, “but if you were to ask me back in April and then today about a surprise, I think they are a team that is maybe the major surprise of all the teams in baseball.

They’ve had a really wonderful year when you think about where they started. We’ll see what happens.”

Selig pointed with justifiable pride to the parity prevalent in baseball:  Since 2001, 28 of the 30 teams have made the postseason (all but Toronto and Kansas City) and this season, 20 teams were within 5½ games of a playoff spot as of Wednesday.

The revenue sharing that has led to hope in many more markets might be what outweighs the bitterness of the union fights and the scandals with PEDs during his time.

“I’m proud of what’s gone on the last 22 years,” he said. “The game doesn’t look like it did in 1992, for a myriad of reasons. Whether it’s the economic changes or all of the other rule changes, social changes. But I’ll leave all of you to determine that. It’s pretty hard to determine your own legacy.”

Selig’s retirement includes plans to teach at universities and write a book.

“I’m not dreading retirement at all,” he said. “On the contrary, I’m really looking forward to it.”