Huskies LB Shaq Thompson was everywhere Saturday in Washington’s domination of Illinois, the first time UW has put together a complete game. 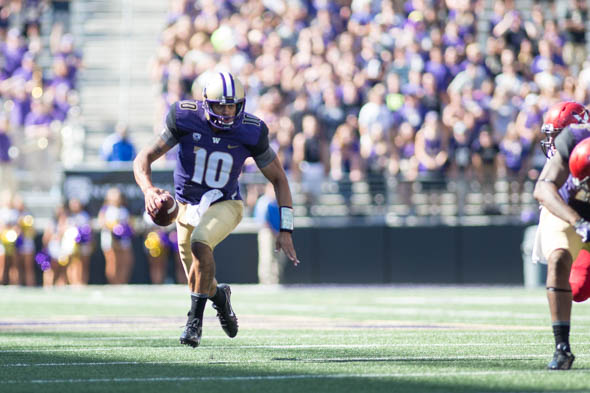 Cyler Miles, here against Eastern Washington, completed 15 of 20 passes for 191 yards, one TD and no turnovers against Illinois Saturday. / Drew McKenzie, Sportspress Northwest

In the Seahawks-drenched local sports culture, the connection is irresistible: University of Washington LB Shaq Thompson is an early qualifier as an apprentice for the Legion of Boom. The guy is everything Pete Carroll wants: Long, fast, smart and tough. And if needed, he can carry a team.

The fullest glimpse yet of Thompson’s potential was rolled out on a splendid lakeside afternoon Saturday. The hapless 44-19 victim was Illinois, a Big 10 Conference team that made a strong push for entry to the Big Sky Conference, which, given the play of Eastern Washington a week earlier at Husky Stadium, has risen to the level of compliment.

“I thought I was free, but I got tripped up,” he said a little sheepishly. “I just have to pick my feet up.”

Few pick up feet (and yards) as well as Thompson, who is listed as 6-foot-1 and 228 pounds but plays bigger, except when in the open field, when he runs like a little sprinter.

“When he has the ball in his hands, he’s a dynamic guy,” said defensive coordinator Pete Kwiatkowski. “No, we don’t fight over him. It’s mostly a joke (among coaches).”

They better enjoy him, because there’s no football reason to suggest the junior needs more preparation for the next level. Going back in the records as far as 1978, he’s the first Husky to return a pick and a fumble for touchdowns in the same game. His touchdown burst on offense a week ago against Eastern, and two returns Saturday were freakish in that no opponent laid a hand on him.

“There’s something magical about him,” said teammate DT Danny Shelton. “The way he does things . . . he just makes things happen.”

UW coach Chris Petersen is getting acquainted with all his players as the season plays out, but few if any have impressed him as much as Thompson.

“I enjoy watching him play,” he said. “I haven’t been around him in game situations a whole lot. You put him on offense, and he does good things. He’s good on special teams. Then he creates his own offense with his defense.”

His fumble return was athletic artwork. The ball came loose on a run, LB John Timu shielded an Illinois player with a shot at recovery, and Thompson made a skilled snatch of the ball and flew down the sideline for a 36-yard touchdown.

Thompson’s play highlighted a critical rebound Petersen needed from his defense, which gave up 52 points and 475 yards passing to Eastern last week primarily because UW has a preschool posing as a secondary.

From a roster standpoint things grew even worse: Petersen said redshirt freshman CB Jermaine Kelly is likely lost for the season after breaking his ankle in practice. He will undergo surgery. And CB Marcus Peters, the junior and only experienced player in the secondary, missed the game to suspension. Petersen refused to disclose anything more about Peters’ future.

Mission accomplished. Led by Kikaha’s three sacks, Washington threw down Lunt six times, confining him to 230 yards on 16 of 26 passing, and minus-22 rushing, before being pulled in the fourth quarter.

Pressure from an experienced front seven will be important throughout the season as long as there’s three true freshmen getting big chunks of playing time in the secondary.

“We helped our secondary with some coverage things,” Petersen said. “He wasn’t able to stay back there for a long period.

The game-long domination was the most complete outing in the otherwise fitful start of the Petersen regime.

“I think we’re making progress — I don’t know how complete it is,” he said. “I keep telling them Monday doesn’t change. If it doesn’t change with how the focus and effort has been the last couple Mondays, we’ll be headed in the right direction.”

Another stroll in the park looms Saturday with Georgia State of the Sun Belt Conference, a school barely returned to big-boy FBS ball. Consider it the final exhibition game before Stanford rolls in Sept. 27.

The Pac-12 opener may be a fine time for Thompson to continue his boomlet.