Washington State set multiple passing records, but the fact that they ran the ball a little in the rout of Portland State was encouraging to Cougars fans. 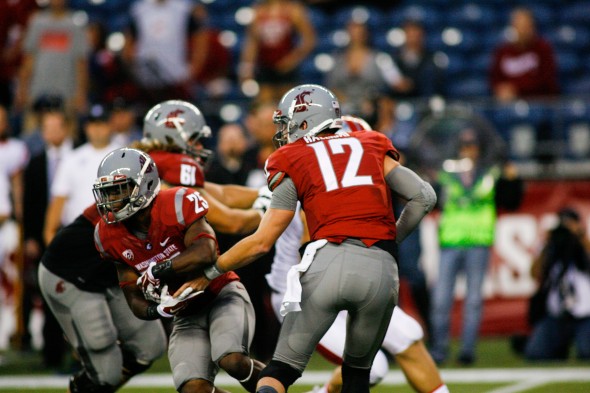 PULLMAN – Connor Halliday has started just one full season at Washington State, but only 12 players in Pac-12 history have thrown more touchdown passes than Halliday, and only 18 have thrown for more yards.

On Saturday night, Halliday amassed more passing yards and total yards in one game than anyone in Pac-12 history except . . . well, Halliday. If his coach was all that impressed, he hid that fact exceedingly well.

“He forced two balls (on interceptions). Other than that, he played pretty good,” Mike Leach said with a figurative yawn after Halliday passed for 544 yards and six touchdowns in a 59-21 rout of Portland State.

“That was absolutely awesome to see that for Luke,” said Halliday, a senior from Spokane. “A great kid. He deserves it. He works so hard in the film room, weight room and everything. The program will be in good hands with Luke.”

The collective hands of Cougar Nation were grasped firmly around Halliday’s neck only a week ago, when the Cougars dropped to 0-2 after spotty performances in losses to underdogs Rutgers and Nevada. A win over a Football Championship Subdivision team like Portland State hardly makes WSU bowl-worthy, but the Cougars will take any momentum they can muster heading into Saturday’s Pac-12 opener against second-ranked Oregon.

“We’ve got to enjoy the win right now, then as soon as we step in this building tomorrow (Sunday), it’s Oregon,” offensive guard Gunnar Eklund said. “It’s a starting point for us. We’re excited to get the win, and we needed the win.”

Did they ever. Hype was high for the Cougars coming into the season, but no WSU team has ever recovered from an 0-2 start to finish with a winning record. Only three times have WSU teams started 1-2 and finished above .500, and none of those teams played in a bowl game.

Still, the victory over Portland State was encouraging. The Cougars mixed in running plays far better than the first two times out, played their best defense of the year and also had their top showing on special teams. Such a combination bodes well against any opponent, though it remains to be seen if the Cougars have what it takes to snap their seven-game losing streak against the mighty Ducks.

The Cougars do have the advantage of playing Oregon at Martin Stadium. Recent renovations include the $61 million football operations building that rises prominently above the west end zone, holding noise in even more in a stadium that can be frightfully loud when the Cougars are winning.

Alas, a decade has passed since the Cougars last posted a winning record. Leach and his players speak of the need to change the culture in the locker room, but nothing leads to more wins than more wins.

The Cougars have sold out the Oregon game, and they came close to selling out for Portland State. The game drew 30,874 (32,952 is the new listed capacity) on a gorgeous evening, and Halliday and Co. put on a show that should bring the natives back for more.

A win over Oregon (3-0) seems like a reach for a team that started five redshirt freshmen Saturday. A year ago, the Cougars were clubbed 62-38 in Eugene despite Halliday’s 557 passing yards.

Against Portland State, the Cougars ran the ball 23 times for 76 yards and their first rushing touchdown of the year. Vadovų atranka, lyderystės mokymai vadovams ir koučingas, kompetencijų vertinimas bei darbuotojų paieška Those are yawn-worthy numbers for most teams, but in Leach’s pass-happy attack, they are numbers that were more than enough to prevent the Vikings from constantly blitzing or dropping everyone back in pass coverage.

Of course, it would seem impossible for WSU to mount any sort of challenge against Oregon without Halliday having a sensational passing day. He could use a little help from his friends. Like, say, senior wide receiver Isiah Myers, who smoked the Vikings for career highs of 11 catches, 227 yards and three touchdowns.

A win over Oregon, on national television, before a sellout crowd, at the Cougars’ fancy new digs, is precisely the type of win that has escaped the Cougars since Leach arrived three years ago. It is a win that could signal a new era of football on the Palouse, but even a strong showing in defeat would reassure long-suffering WSU fans that good times are a comin’ in the none-too-distant future.