The Seahawks had the ball for less than 18 minutes Sunday, the key factor in their 30-21 upset loss to the San Diego Chargers that dropped them to 1-1. 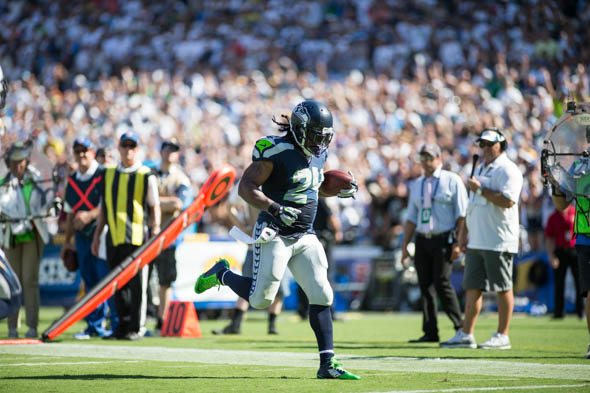 Marshawn Lynch scored on a 14-yard pass from Russell Wilson, but the Seahawks lost to the Chargers 30-21 Sunday in San Diego. / Drew McKenzie, Sportspress Northwest

The San Diego Chargers Sunday unveiled the nearly perfect formula for beating the Seahawks: crank the temperature to 100+ degrees, wear down the Seattle defense during the steam bath, and keep Marshawn Lynch off the field. That, and more, added up to a 30-21 San Diego upset victory in which the Seahawks seemed doomed almost from the outset.

Unable to force a takeaway, unable to get their offense rolling for an extended period of time, the Seahawks lost by more than seven points for the first time since Week 9 of the 2011 season when the Dallas Cowboys beat them by 10.

The Seahawks didn’t lose as much as the Chargers won. Quarterback Philip Rivers completed 28 of 37 passes for 284 yards and three touchdowns, all to TE Antonio Gates, who scorched the Seahawks with seven catches for 96 yards. He repeatedly abused Pro Bowl safety Kam Chancellor.

“The game got so much weighted in favor of them controlling it,” said Seahawks head coach Pete Carroll, referring to San Diego’s 75 offensive plays to Seattle’s 40. “They also were able to get themselves in manageable third-down plays and they just controlled it. It’ unfortunate, but my hat’s off to them. The game wasn’t balanced out in possession, they were more efficient than we were and that was the story.”

Lynch carried only three times in the first half and six times overall for 36 yards, as Seattle was unable to establish any kind of running game due to San Diego dictating the time of possession.

San Diego controlled the clock for 42:15 to Seattle’s 17:45, the fourth-lowest in terms of possession time in franchise history. Rivers was mainly responsible as he engineered 10 first downs on 17 third-down plays against an increasingly gassed Seattle defense.

The Seahawks contributed heavily to their own demise with mistakes and penalties. Percy Harvin fumbled a kickoff return in the second quarter, the turnover leading to the second of Rivers’ three touchdown passes to Gates. A mindless 15-yard personal foul on LB Bruce Irvin helped set up the third Rivers-to-Gates TD. TE Zach Miller helped sabotage two other key drives with three penalties, including a 15-yard personal foul.

Even though the Seahawks trailed 27-21, they still had an opportunity to win late in the fourth quarter when they faced a 91-yard drive with slightly more than three minutes remaining. But after the Chargers snuffed a jet sweep by Harvin on first down, the game was essentially over.

Wilson, who had a chance for his 11th fourth-quarter comeback dashed, completed 17 of 25 for 202 yards and touchdown throws of 3 and 14 yards to Robert Turbin and Lynch. He had a 119.1 passer rating, but never had enough opportunities due to the fact that Seattle’ defense couldn’t get off the field.

The outcome might have looked worse had not Harvin dashed 51 yards for a touchdown down the sidelines in the first quarter following a pitch left from Wilson. The Chargers did not challenge the score, nor did the replay officials review it. But cameras later determined that Harvin stepped out of bounds, a blown call.

NEXT: The Seahawks return to CenturyLink Field next Sunday to face Peyton Manning and the Denver Broncos. Kickoff on CBS is scheduled for 1:25 p.m.