Defensively vulnerable against Chargers QB Philip Rivers, the Seahawks defense melted from the temps and the pressure Sunday in San Diego. 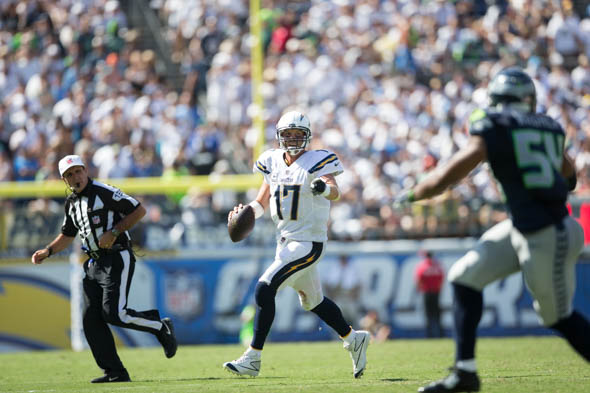 Philip Rivers was a master of all he surveyed in San Diego Sunday. / Drew McKernzie, Sportspress Northwest

Why doesn’t everyone do this against the Seahawks?  Control the ball and the clock. Make fewer turnovers and more third downs. Pressure the quarterback. Stop the run.

The Chargers took copious notes on the Seattle methodology and shoved the notebook in the face of the Seahawks Sunday afternoon in San Diego, 30-21. Abetted by 110-degree-plus field temperatures and eight Seattle penalties, some acutely foolish, it was remarkable the Seahawks had the ball with three minutes left and a chance to win.

But the final possession collapsed amid errors — WR Doug Baldwin missed the key block on a Percy Harvin jet sweep, losing six yards, and Zach Miller was flagged on the final play for tripping — leaving the defending Super Bowl champions tattered and bewildered in their first road game.

So much for the extra four days of rest and prep they had over the Chargers, who played Monday night. The Seahawks defense never quite got an edge, and after the first quarter, the offense faltered more often than it flew.

“They had twice as many plays as we did,” coach Pete Carroll said, lamenting a 75-40 differential. “That’s a great job by their offense. They were more efficient than we were. They were able to get into manageable third downs and converted like crazy.

San Diego QB Philip Rivers found a vulnerability in the Seahawks defense – a gap behind the rush and in front of the secondary – and exploited it with dump-off passes and short throws. The Chargers’ longest play was 21 yards, but they made 10 of 16 third down conversions, including a couple on the ground by Rivers, who rarely scrambles, but this day carried 11 times for 17 yards.

“Normally, our defense does a great job,” Carroll said. “And they kept us in the game to allow us a chance. Unfortunately, we weren’t able to make the plays we needed.”

Rivers also found a vulnerability in the pass coverage around tight end Antonio Gates, an eight-time Pro Bowl vet who worked his way around SS Kam Chancellor for three touchdown receptions. He had eight catches for 91 yards and could not be tracked by Seattle’s secondary, which was breaking in two newcomers and felt the intense heat and humidity perhaps more than any unit.

“The heat got to a lot of people today, including me,”  Seahawks FS Earl Thomas told the KCPQ Channel 13 post-game show.  He was one of several Seahawks who needed to leave the field for fluids delivered intravenously.

Two mistakes were critical: WR Percy Harvin’s fumble on a second-quarter kickoff return that gave the Chargers the ball at the 26-yard line, which Rivers converted into a TD drive and 20-7 lead; and a foolish penalty on LB Bruce Irvin, whose incomprehensible shove of Rivers out of bounds drew personal foul. Instead of a punt, the Chargers had 15 yards and first down and what proved to be the winning score late in the third period.

The Seahawks led the NFL in penalties last season, and appeared to be on top of the problem in the opener against Green Bay 10 days earlier, being nailed for four. But the eight for 53 yards were especially costly in a game that the Seahawks had the ball for less than 18 minutes.

That deficit can be surmounted by scores from defense and special teams, but the Seahawks recovered none of the Chargers’ three fumbles, Rivers didn’t throw a pick among his 37 passes and 28 completions. He was sacked once.

Wilson, meanwhile was effective when he had time, completing 15 of 22 passes for 202 yards. But he was repeatedly hit and hurried, going down twice. RB Marshawn Lynch also had a modest day of six carries for 36 yards and four receptions for 27 yards and a TD.

Seattle’s offensive highlight created the first TD. Harvin, set up as a tailback behind Marshawn Lynch, took a pitch from Wilson and went 51 yards for the longest rushing TD of his career. But even that came with an asterisk: Replays showed clearly that he stepped out of bounds, but the play was neither challenged nor reviewed.

The Seahawks had some success with the hurry-up offense.

“We went hurry-up to put pressure on their defense,” he said. “We had some really good plays, very good ones for most part. It shows how much we progressed. We’ve always done a good job with it. We don’t usually try it too much because we try to (drain) the clock.”

Instead, it was the Chargers who controlled the clock by converting third downs where the Seahawks were weakest. And they did so in the game before the Super Bowl rematch with the Broncos, who beat the Kansas City Chiefs 24-17 Sunday.

Oh. So that’s how it works, say the Broncos. Much obliged, Chargers.