Seahawks won’t say so, but heat hurt them more

The macho code of ball precludes coaches and athletes from saying the heat was decisive, but Seattle’s defense was out there for 75 plays to 40. We’re not stupid. 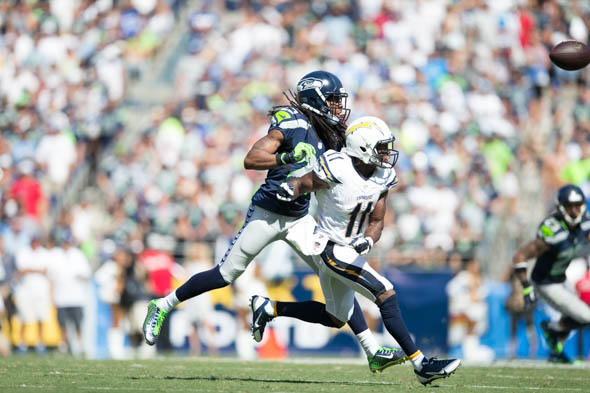 Rchard Sherman took fluids before the game and at the half, and managed to play the whole game. / Drew McKenzie, Sportspress Northwest

Before the discussion begins about the Denver Broncos’ attempted advance Sunday from the kiddy table to the adult table, let’s clear up a little canard lingering from the Seahawks loss in San Diego (civic motto: “Hell’s Exhaust Pipe”):

When football is played in 118-degree heat, it is the same for both teams.

No — unless both teams play a relatively equal number of offensive plays.

The basic football fact is that defensive players are always more active than their counterparts on offense. That’s because the offense knows where it’s going, the defense doesn’t. Defenders always expend more energy on misdirection and pursuits of ballowners who have already been retired to the earth.

So when coach Pete Carroll says, “The heat was a factor, but it wasn’t the deciding factor,” that may be considered the high road in sports diplomacy, but when it comes to human physiology, it is magnum piffle.

Carroll can’t be heard to complain about the heat, lest he labeled a whiner, and his players also attempt to shy from the facts, lest they be seen as cowards.

But considering the Seahawks defense had 75 plays and the Chargers defense 40, it is preposterous to suggest it wasn’t decisive. But to do so violates the macho creed of sports, the same testosterone by-laws that prevent baseball players from rubbing the spot where the ball struck them.

Bygawd, it worked on the playground (“didn’t hurt me!”), so it still must work for millionaire businessmen.

“Well, there’s nothing you can do about you so you don’t find me talking about it,” said Carroll Monday, sounding a little indignant. “What am I going to do? It’s hot on their side as well. There’s nothing that you can do but hydrate really well during the week, which we did. We were well ahead of that.

“We had a lot of guys that were given the fluids beforehand and at half time to deal with it. When you lose your juice, you have to replace it. I’m sure (the Chargers) had to do the same thing.”

Then, perhaps recognizing deep down that he sounded a trifle silly, he came off his fastball.

“It does have an effect somewhat, if you’re really fighting to hold onto your juice and your energy,” he said. “Then you can make some mistakes, and there was some of that. We saw some of that. There were some things that were a little bit uncharacteristic. That’s just the way the game is. We did the best we could.”

That’s a little better. I mean, I get that Carroll and any good coach tries to prevent outside influences from cluttering up the tasks at hand. But 118 degrees is 118 degrees, and it was three hours in dark clothing. I also get that heat-stricken Seahawks defenders might see three of Chargers TE Antonio Gates at any time, and in the second it takes to separate him from his two mirages, a touchdown may happen.

All coaches apparently are trained by some cosmic deity somewhere to describe all adverse game developments as excuses. They cannot declare them reasons.

OK, that’s fine. Let them stick to the code. The rest of us don’t have to buy it.

By all that is meteorologically, mathematically and athletically sacred, it is a huge disadvantage in 118-degree heat to play 35 more plays than the opponent.

The Chargers sure as hell knew it, and made it plain they knew: They wore all white uniforms and designed a game plan that valued the four-yard gain as if it were the Ark of the Covenant.

It was brilliant, and the Seahawks not only had no answers, they played right into it with their own relatively quick scoring drives that gave even less rest to the defense.

“Although we did OK in that situation, the ball went back to them and they held on to the football again. We were challenged to adjust in this game, and we did, and it wasn’t enough.”

Seattle’s plans were so fouled that Marshawn Lynch carried only six times for 36 yards. Contrary to some speculation, the Seahawks did not forget they had Lynch.

“That was just the way this game turned out — that’s the last thing we want to have happen,” he said. “The way it worked . . . that’s just what occurred.”

Acknowledging that the heat helped beat them doesn’t diminish the point that Carroll was outcoached and his players outplayed and that the Chargers richly deserved to win the game. As Carroll pointed out, QB Philip Rivers “played near-perfect football.”

But it does suggest that the panicky apprehensions surrounding a belief that the Seahawks defense is somehow more vulnerable than a year ago is overdone. Think about it: If Earl Thomas, Kam Chancellor and Byron Maxwell are in the locker room getting IVs, that means they’re not in the game. So the defense’s play is, by definition, diminished.

We can let the coaches and players play their macho games. We know better.

Forecast Sunday: Sunny with a high of 82. Or 36 degrees colder than San Diego. Brrr.

Carroll said the Lynch’s departure to the locker room before the game ended, caught by TV cameras, was of no concern because he was troubled by back spasms: “His back tightened up, or something like that. He went off with the doctors. I wasn’t worried about that” . . . Assistant line coach Pat Ruel flew back to Seattle Monday after he experienced an irregular heartbeat after the game and was taken to a San Diego hospital for an overnight stay. “Everything went well this morning so he’s in good shape,” Carroll said.