The Super Bowl rematch Sunday at the Clink will mark only the seventh time that Super Bowl participants from one year faced each other the next season. 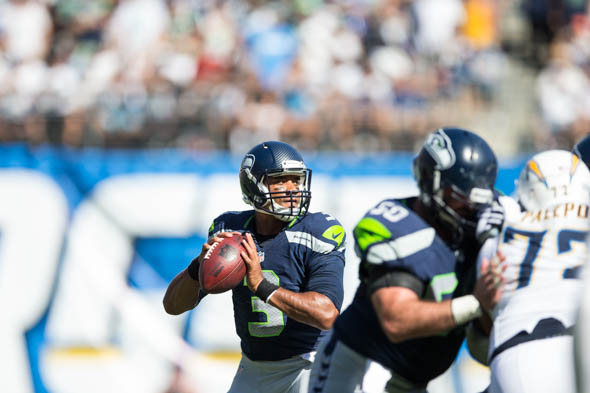 Quarterback Russell Wilson had the ball in his hands for only 17 minutes, 45 seconds Sunday, not nearly enough time to get the job done against San Diego. / Drew McKenzie, Sportspress Northwest

When the NFL announced its 2014 regular-season schedule, the first game to get a red circle drawn around it was the Week 3 matchup between Denver and Seattle at CenturyLink Field – an almost immediate rematch of Super Bowl XLVIII in which the Seahawks de-toothed Peyton Manning and the Broncos 43-8.

Denver Veep/GM John Elway used the 35-point embarrassment as motivation to bolster his roster, which the Broncos especially did during the free agency period when they filled a variety of needs, overhauled their defense and gave themselves an infusion of athleticism and nastiness.

Already possessing the best offense, statistically, in NFL history, the Broncos added to the defense with future Hall of Fame pass rusher DeMarcus Ware from the Dallas Cowboys and cornerback Aqib Talib from the New England Patriots, among a host of lesser lights. The idea was to get more physical defensively, which the Broncos did, by all accounts. At 2-0, they will meet the 1-1 Seahawks, coming off Sunday’s 30-21 loss to the San Diego Chargers.

Super Bowl teams from one season generally do not face each other the next year. In the Super Bowl era, such a rematch has occurred only six times, and not since Mike Holmgren’s 1996 Green Bay Packers, having beaten New England 35-31 in Super Bowl XXXI, came back in Week 9 the following year and, behind Brett Favre, knocked off Drew Bledsoe and the Patriots 28-10.

In the six next-season rematches of Super Bowl teams, the defending champion won four times and lost twice, as the following shows. Note: After Dallas won Super Bowl XXVII (Jan. 31, 1993) over Buffalo (52-17), the Cowboys twice faced the Bills during the 1993 season (regular and post).

In Week 2, the Bills, behind Jim Kelly, defeated the Cowboys 13-10 in Dallas. But in Super Bowl XXVIII Jan. 30, 1994, in the last rematch of Super Bowl teams from the previous season, Dallas routed Buffalo 30-13.

No ball, no win

In Carroll’s second year (2011), with quarterback Charlie Whitehurst flailing, the Seahawks ran 50 plays over 12 drives, accomplishing nothing except Steven Hauschka’s 20-yard field goal in the third quarter of a 6-3 loss at Cleveland. The Seahawks controlled the clock for 17 minutes, 4 seconds.

Sunday in San Diego, where the Chargers executed an almost flawless game plan, marked only the third time in Carroll’s tenure that the Seahawks held the ball for fewer than 18 minutes. In only one of the Carroll games in which Seattle had possession for fewer than 23 minutes did the Seahawks win:

Unable to force a takeaway, unable to get their offense rolling for an extended period of time, the Seahawks lost by more than seven points Sunday for the first time since Week 9 of the 2011 season when the Dallas Cowboys beat them by 10. The Seahawks also had another significant streak come to an end.

Dating to 2012, they had gone 21 consecutive regular-season games without allowing their opponent to score on its first drive. Before Nick Novak’s 50-yard field goal on San Diego’s opening drive, Seattle had not yielded a first-drive score since Dec. 2, 2012, when Earl Bennett caught a 12-yard touchdown pass from Jay Cutler in what became a 23-17 Seattle win over the Bears.

Since 2011, the Seahawks have allowed just seven first-drive scores, including none in 2013. They are 3-4 in those games.