Seahawks used the two weeks ahead of the Super Bowl to diagnose the Broncos down to Manning’s eye movements. Now it’s one week. 43-14? 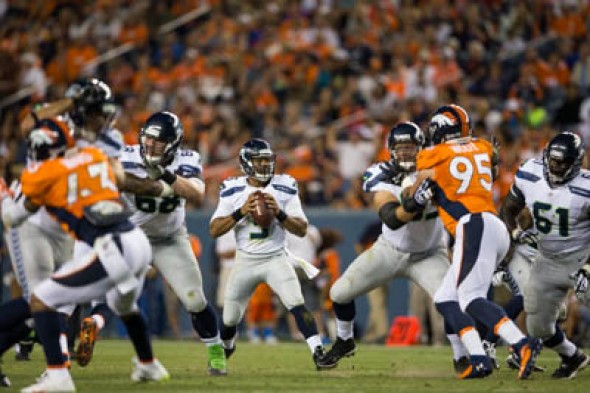 It is said there is no rhyme in English for the word orange. But if one is less than strict, “door hinge” can work. This treatise in language is timely this week because the main color of the Denver Broncos is orange, and because hinges were all that were left after their doors were blown off in February by the Seahawks.

Given that the humiliation factor in Denver is tantamount to Canada’s shame over Justin Bieber, the rematch Sunday at the Clink has drawn much national and local interest.

The expectation is the addition of major defensive talents in DE DeMarcus Ware, CB T.J. Ward, CB Aqib Talib and the return to health LB Von Miller will make the defense more formidable. As for the offense, well, the Broncos have no choice but to do better than eight points.

Then there is the presumption of white-hot rage. In case the Broncos can’t find their own adrenal glands, the Denver Post this week collected all the trash talk delivered by Seahawks since the sorrowful day in the Meadowlands.

The Broncos themselves were circumspect about the degree of passion.

“What we talk about kind of stays in here,” said QB Peyton Manning in a monotone mumble Wednesday during a conference call with Seattle reporters. Manning was better hosting “Saturday Night Live.”

Beyond the factors of players who’ve come and gone, there is one tangible asset the Seahawks had that will be absent this time around.

“Two weeks,” said coach Pete Carroll, referring to prep time ahead of the Super Bowl. The Seahawks used the time to diagnose everything about the Broncos offense down to Manning’s eye movements. By game’s eve, the Seahawks knew they had the Broncos and were little surprised at the blowout.

“We love two weeks of preparation for a team,” he said. “When you have two weeks to get ready, you can really zero in on the things that you’re trying to get done. (But with one week)  you don’t have as much time. It’s hard to be as precise. It’s relative for both teams.

Yes, he does. During his tenure at USC, Carroll was 7-2 in bowl games. And with extra time to prepare for Green Bay, the Seahawks clobbered the Packers 36-16 in the opener.

Making good use of practice and film time has been a Carroll hallmark, and an influential reason he was hired in Seattle. The priority for preparation has been passed on.

“It gives you more time figure out what they’re trying to do,” said Richard Sherman. “To study tendencies. Anytime you have more time to see things you understand things better than you would with less time.”

Partly countering the loss of the second week is the Seahawks’ loss in San Diego. Few, including the Seahawks, saw that coming. Apart from the oppressive heat that drained the defense, the Seahawks were served notice about their humanity.

“We don’t take these (losses) easily,” Carroll said. “This is very high expectations that we live with here. Everyone knows that. The main thing is that everyone took to heart the changes, adjustments, and things that we can fix. They’re ready to do that.

The cram course is on for the new and improved Broncos. The students, following the previous week’s flunk, seem eager.

DE Bruce Irvin said he was fined $8,200 by the NFL for his shove of San Diego QB Philip Rivers as both went out of bounds in the third quarter Sunday. The penalty came after the Chargers were stopped on downs and extended a drive that turned into the game-winning touchdown . . . Sherman said despite reports to the contrary, he was available to talk post-game after the loss. But “everyone was talking to Earl” Thomas, and he left. . . . Regarding Chargers rookie WR Keenan Allen saying that Sherman was nothing special, “just a normal guy,” Sherman fired back: “It’s funny, especially when you’ve got little guys like the Chargers guys talking about how they exposed something, and they had 60 (Eddie Royal had 60 receiving yards) and 50 (Allen with 55) yards. I mean, Antonio Gates, Hall of Famer, had a fantastic game. And Rivers had a great game. And the rest of the guys were there. You see stuff like that and it just makes you laugh.” . . . Asked if it seemed that the receivers wanted to make catches against him more than winning the game, Sherman said, “That’s what it looked like. It’ll probably be something he will tell his kids about. ‘Remember that one game? Caught a few passes on Richard Sherman. Didn’t score, but I caught a few.”’