After a horrendous first half in which they trailed 14-0, the Huskies exploded in the second half against little Georgia State for 45-14 win that sends them 4-0 for Stanford. 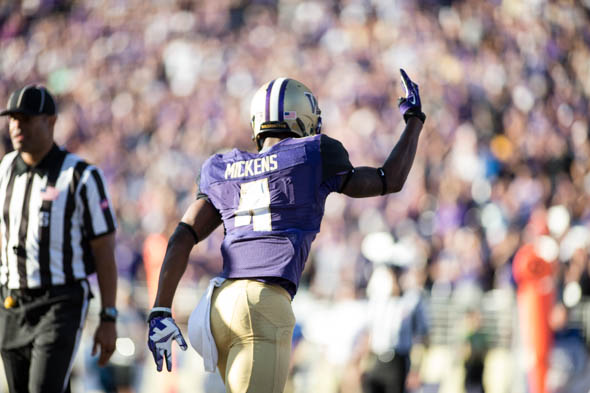 As expected, the Washington Huskies finished the exhibition season 4-0. But the route was less than direct, nearly losing at Hawaii, getting challenged by Eastern Washington and Saturday causing massive gastric problems in the purple constituency. For a half.

Digestive order at Husky Stadium was restored, however, in a stupendous second half, producing a score, 45-14, that looked like what was expected against second-tier Georgia State, in its fifth year as an FBS program and coming off an 0-12 season.

But the 35-point favorites were down 14-0 at the half. They were outgained 231 yards to 73. Hefty boos rolled out of the announced crowd of  64,608, who were expecting a walkover, not the walking dead.

Coach Chris Petersen — who warned Monday, “If our mindset is in the future, we’ll get hit right in the mouth” — was there with the agitated fan base.

“I don’t think I’ve ever been around a more pathetic first half of football from a team I’ve been associated with,” he told KOMO radio. “Sometimes, guys are hard to read. We had a good week of practice. Obviously, I’m having a hard time reading these guys.

“I never tell guys that anything less than truth (about overlooking no opponent). Hopefully, they’ll hear me more down the road.”

The Atlanta school was making the longest trip in its history and first to the West Coast, but couldn’t have looked more comfortable in the first half, while the Huskies played in a daze.

Said Petersen: “Guys were looking around at each other like they were saying, ‘Whose fault is this?'”

Behind a loose quarterback, Kyle Arbuckle, and quick linebacker, Joseph Peterson, the Panthers of the Sun Belt Conference dominated both sides of the ball. Arbuckle threw a pair of short touchdown passes in the second quarter after drives of 52 and 91 yards. The defense, ranked 117th in the nation entering the game, pitched a shutout by holding Washington to five first downs and 15 yards rushing.

The Huskies were missing WR John Ross, who dressed but was held out with a leg problem. That didn’t explain the line’s inability to protect QB Cyler Miles against a previously feeble pass rush.

“It’s easy to draw that conclusion (about the absence of Ross), but we weren’t protecting Cyler,” Petersen said. “It didn’t matter if we had Ross or Superman.”

Petersen said there wasn’t much fire and brimstone at halftime.

“It wasn’t about coaches ranting and raving,” he said. “It was about everyone getting their focus back; everyone doing their job. If everyone handles their responsibility, we’ll be fine.”

Pettis ignited Washington with four punt returns for 98 yards — another 35-yarder was called back for a holding penalty — and Lindquist surprised all by becoming a rusher from the shotgun formation while Miles was split out as receiver.

The most important of his 35 yards on three carries came in the second possession of the second half, after Pettis, a six-foot freshman from San Clemente, CA., ran back a punt to the Georgia State 18. One play later at the nine-yard line, Lindquist entered a game for the first time since his mostly ineffective start at Hawaii.

He took the snap, faked the jet sweep to WR Jaydon Mickens and rumbled up the middle for Washington’s first touchdown. A similar play early in the fourth quarter went for a 14-yard score and advanced the lead to 35-14.

Of Pettis, subbing for Ross, Peterson said, “Somebody needed to do something to get us excited. He was the catalyst. He showed no fear in catching the ball and he made good decisions.”

The coaches wanted to get Lindquist, 6-4 and 245 pounds, back in action.

“He’s big, strong and fast — we needed to put his skills to use,” he said. Those were really our most effective runs.”

On defense, NT Danny Shelton had another huge game — a team-high 13 tackles, a sack and two tackles for loss. CB Marcus Peters, who was suspended for the previous game against Illinois for a sideline tantrum, returned in a big way with two of Washington’s three interceptions, and another that was denied by a pass-interference penalty on him.

LB John Timu scored Washington’s final TD with 8:12 left when he grabbed a pass tipped by teammate FS Budda Baker and returned it 35 yards for a TD. The 45 points tied a school record for a half, and it was the most for a second half.

Ready or not, the big-time arrives Saturday with Pac-12 play and Stanford, which had a bye and thus had time to titter over Washington’s first half.

“They’ll execute at high level,” Petersen said. “If we not hitting on all cylinders, it will be ugly.”

Then Saturday did serve a purpose beyond getting Georgia State a $900,000 payday — it gave the Huskies a close-up look at ugly.