The Seahawks squandered a 17-3 fourth-quarter lead, but Russell Wilson directed a flawless overtime drive that beat the Broncos 26-20 at the Clink. 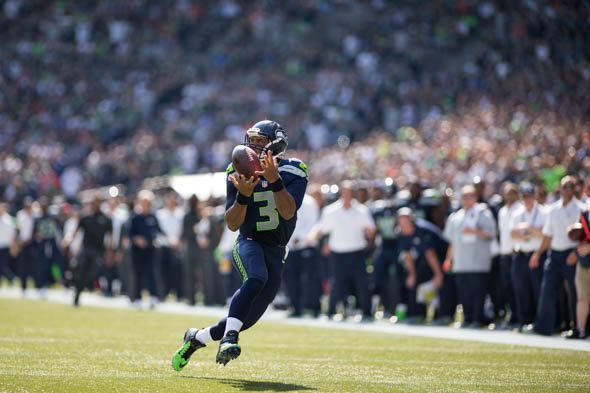 It bore no resemblance to Super Bowl XLVIII, but until proven otherwise, the Seahawks still own the Denver Broncos. Sort of. And only barely. The Seahawks squandered a 17-3 fourth-quarter lead, were forced into overtime by the resourceful Peyton Manning, and then, behind Russell Wilson, drove 80 yards in 13 plays in extra time, Marshawn Lynch plunging in for the winning touchdown and a 26-20 triumph as 68,447 at CenturyLink Field celebrated like it was Feb. 2.

It wasn’t, of course. Seattle won — or rather survived — the white knuckler in a game that couldn’t have been closer. Seattle’s 17-3 lead, constructed on a pair of Wilson touchdown passes in a three-minute span of the second quarter, not only proved a mirage but may have proved XLVIII an anomaly.

Seattle’s lead slowly evaporated in the fourth as Manning and the Broncos tallied two points on a safety (17-5) and then received a three-yard TD pass from Manning to Julius Thomas (17-12).

The Seahawks seemed to have the game in hand with two minutes to play when Kam Chancellor, one of the big hitters in XLVIII, intercepted Manning and returned it 52 yards, leading to a 20-yard Steven Hauschka field goal and a 20-12 lead. But future Hall of Famer Manning had yet another extraordinary drive in him.

With no timeouts, Manning directed the Broncos on a six-play, 80-yard drive in a mere 41 seconds, his 26-yard TD to TE Jacob Tamme bringing Denver within 20-18. Of course, Manning adroitly nailed the two-point conversion pass to Demaryius Thomas.

“I thought we did a great job of stopping Manning for most of the game, but then he got the ball and made some plays on that drive, and that’s why he’s Peyton Manning,” said Wilson.

With the game tied 20, the Seahawks had to score a touchdown or cede the ball back to Denver. But Wilson would have none of it, the reason he already is a two-time Pro Bowler.

Starting at his 20-yard line, Wilson hit Percy Harvin for 11 yards, Lynch ran for seven, Wilson scrambled for five. Then Wilson hit Jermaine Kearse for 12, Wilson ran for five, Wilson and Harvin hooked up for five, Lynch bulled for six, Wilson dashed for five and then for six.

After Wilson and Harvin hooked up again for for seven Denver’s six-yard line, Lynch closed it out, bursting in for the touchdown as Manning, helpless, stood on the sidelines.

“We go into the bye week with a great feeling,” said coach Pete Carroll. “It was a great win. I’m really fired up about the way we played.”

Wilson completed 24 of 34 for 258 yards and touchdown passes to Ricardo Lockette (39 yards) and Lynch (five yards). His passer rating of 99.9 took a hit when a throw he attempted in the fourth quarter was tipped and intercepted.

Wilson, leading the Seahawks to the 22nd win in their past 27 games, also caught the first pass of his career, a 17-yard completion from WR Jermaine Kearse that set up a 20-yard field goal by Steven Hauschka in the first quarter.

“I think the last time I caught a pass was at the University of Wisconsin,” said Wilson. “Jermaine threw it on the money. He did a really good job.”

Lynch gained 88 yards on 28 carries as the Seahawks outgained the Broncos 384 yards to 332. They ran 75 plays to Denver’s 70 after managing just 40 last week against San Diego. Seattle also held the ball for more than 38 minutes after controlling it for less than 18 against the Chargers.

Manning nearly engineered the 52nd comeback win of his NFL career. He threw for 303 yards and two touchdowns, but the pick he tossed to Chancellor in the fourth quarter delivered a devastating blow to the Broncos, who lost for the first time in three games.

Jon Ryan pinned Denver inside its 20 on five of his six punts . . . Sunday’s game marked the sixth time that Super Bowl participants from one year faced off in the regular season the next. With Seattle’s win, defending champions are 4-2 in such games . . . Denver’s Emmanuel Sanders caught 11 passes for 149 yards, the first time in 14 games the Seahawks have allowed a 100-yard receiver . . . Manning extended his streak to 42 games with at least one touchdown pass.