The Seahawks head into a bye week with a 2-1 record after beating Denver in overtime Sunday. History hasn’t been kind to Seahawks teams that started 1-2. 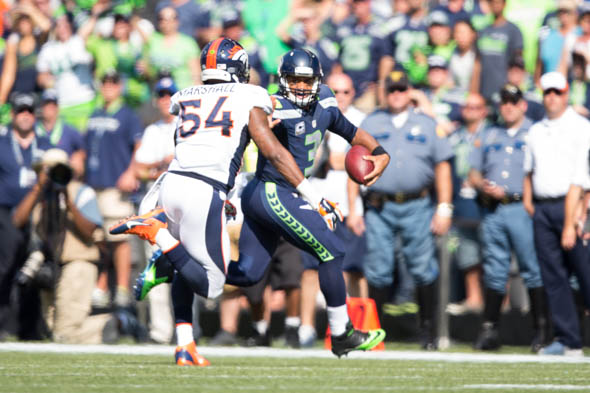 The Seattle-Denver Super Bowl rematch ended almost precisely the way prognosticators predicted. Given the CenturyLink din, seers saw a five-point Seahawks victory and they won by six, 26-20. How they won, with Russell Wilson’s NFL-record performance in overtime upstaging Peyton Manning’s stunning drive that forced a fifth quarter, placed the game in the realm of instant classic, at least from a local perspective.

But the Seahawks are fortunate that Manning never touched the ball in overtime. They might be 1-2 instead of 2-1.

Given its talent and speed, and especially the guts and skill of its quarterback, this edition of the Seahawks probably is far different from those that came before, but history hasn’t been kind to other Seahawks clubs that started 1-2.

In order to start 2-1 this season, the Seahawks needed to tie the NFL regular-season record for the longest overtime touchdown drive as measured by the number of plays. According to Elias, the 13-play march, which covered 80 yards, matched Denver’s 13-play OT drive at Kansas City in 1978 and the New York Giants’ 13-play effort at Philadelphia in 2006.

In Seahawks annals, Sunday’s 13 OT plays eclipsed by one the 12-play, 80-yard drive orchestrated by Wilson at Chicago Dec. 2, 2013 that ended with a 27-yard Steven Hauschka field goal and a 23-17 Seattle victory.

Only one other game-winning overtime drive in franchise history reached double figures in plays. On Dec. 2, 2001, Matt Hasselbeck engineered an 11-play, 62-yard drive at San Diego that concluded with Rian Linidell’s 24-yard field goal and a 13-10 Seattle win.

In only three of the 12 all-time overtime wins was the winning score not a field goal. These were those games, with Wilson involved in two:

In the Chicago game, Wilson led both go-ahead and game-winning TD drives. He rushed for 47 of his 71 yards during those two, which included three zone-read rushes for 22 yards and two scrambles for 25. Wilson also completed 9-of-12 passes during those two drives. His passer rating: 147.2.

Of the Seahawks’ final 80 yards Sunday, Wilson accounted for 57, 22 rushing and 35 passing (35). That enabled him to remain perfect in his matchups with quarterbacks who have won a Super Bowl (the stats are Wilson’s numbers in the games, regular season and playoffs, against each quarterback):

The “points differential” column shows that Wilson and the Seahawks have more than doubled the score in games against quarterbacks with Super Bowl wins.

One of the most tiresome things about NFL coverage is the mindless debate about “elite” quarterbacks, specifically those who are, as opposed to those who are not. More of that nonsense emerged after Sunday’s game when one scribe penned that Wilson is not elite because he barely averages 200 passing yards per game.

That has nothing to do with anything. Passing efficiency is what counts, not yards, and Wilson is about as efficient as a quarterback can get. He does exactly what he’s supposed to do in the offense Pete Carroll and his staff have constructed, and now that apparently includes catching passes.

Wilson caught a pass Sunday – a 17-yard throw from WR Jermaine Kearse – before he ever completed one. He became the first Seattle quarterback with a pass reception since Seneca Wallace snagged a five-yard throw from Matt Hasselbeck Nov. 15, 2009 at Arizona. Wallace also holds the franchise record for longest pass reception, 29 yards Oct. 14, 2007 against the New Orleans Saints, also from Hasselbeck.