Seahawks coach was pleased with the defense’s game against the Broncos, whom he said deployed on the last series a set of pass routes that confused the secondary. 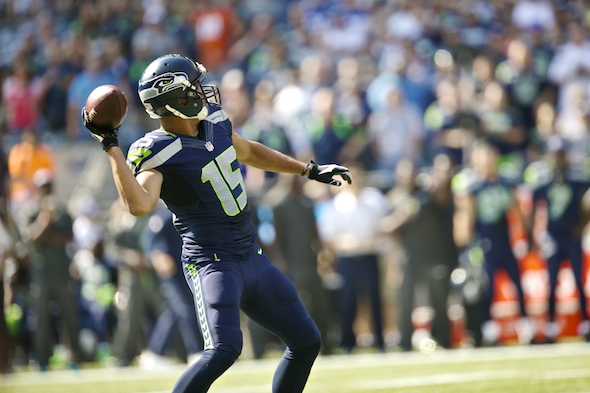 Usually one to deflect hyperbole, coach Pete Carroll may have started some. He was so pleased Monday with the 26-20 overtime win over Denver that he said that the Seahawks played better than in the 43-8 win over the Broncos in the Super Bowl. While the claim may be hard to prove, it was a major uptick from the 30-21 loss in San Diego that is still burning in Carroll’s mind. “It was good-looking film,” he said of the Broncos review. “We played really hard on defense. I was anxious to see if we would play (well), and looked like we played back in the Super Bowl against these guys, as far as breaking on the ball and running and hitting. I thought we did better.”

There was, however, the large matter of the final minute, when the Broncos fooled the Seahawks with fresh pass routes that led to an 80-yard, six-play drive that took QB Peyton Manning just 41 seconds.

“There was one concept that they threw at us that we just misplayed,” Carroll said. “They threw it four times in a row. We stopped the first one, the second one (42 yards to WR Emmanuel Sanders) got us, the third one we were OK, and the fourth scored the touchdown (26 yards to TE Jacob Tamme).”

The Broncos’ scheme included crossing Sanders and another receiver deep downfield to confuse FS Earl Thomas. The mixup in coverage was made worse when SS Kam Chancellor collided hard with teammate CB Marcus Burley and knocked him from the game, forcing the Seahawks to insert newcomer CB Josh Thomas.

‘”Just a route principle we didn’t play well and they did a really good job,” he said. “Josh just couldn’t quite get there.”

The other play burned LB K.J. Wright. Although Wright and CB Byron Maxwell said after the game they had not seen the routes in film study, Carroll said he alerted the defense to get deep on the sideline routes.

“Other than that drive, we kept them underneath us all game long,” Carroll said. “The guys just did a fantastic job and gave us a chance to play a dominant day of defensive football.”

The Seahawks are into their bye week, which gets a one-day extension because the next game is a Monday nighter at 5:30 p.m. Oct. 6 in Washington, D.C. It’s the same as a year ago when they had the entire week off after beating Minnesota before playing the Saints on a Monday. Then it’s 13 consecutive weeks without pause.

Bone spurs in his ankle “really got in the way” of Chancellor’s play in San Diego, Carroll said. But treatment during the week helped enough that he had one of his best games against Denver. A Fox Sports report said that surgery was considered, but Carroll didn’t confirm that. He did say that it “might be” a season-long situation . . . LT Russell Okung left the game with what appeared to be a fairly serious left shoulder strain, but returned quickly. “He knew something happened,” Carroll said. “I think he took the time to really pray that it wasn’t something bad. And when he jumped up he felt like his prayers were answered. He felt a lot better . . . he came back and finished the game and did a nice job. Really cool how he could bounce back from that.” . . . LB Bruce Irvin (hip soreness from surgery) sat out Sunday but Carroll said he should play against the Redskins  . . . Carroll said he wished he had thrown the challenge flag on Marshawn Lynch’s two-yard run to the goal line on Seattle’s first possession, which eventually produced a field goal. He thought Lynch had crossed the plane, but assistants reviewing the play couldn’t be definitive. Lynch was called down but may have been atop other players and squeezed over the line.