Stanford figures to bring out best in Huskies

Huskies were bored with exhibition schedule. The season starts Saturday. They won’t be bored with Stanford — especially if QB Cyler Miles sees how Keith Price did it. 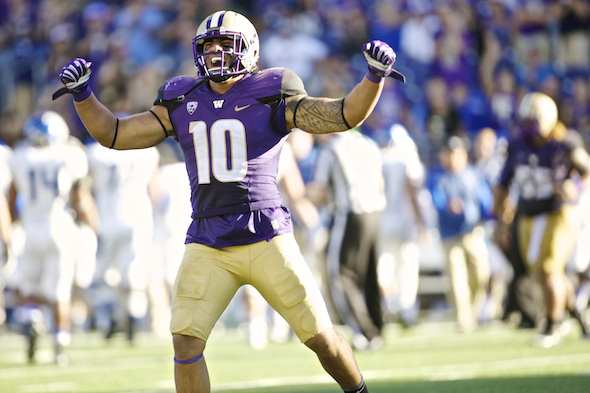 Perhaps the most consistent aspect of Washington’s raggedy, yet 4-0, start to the football season has been coach Chris Petersen’s weekly lament that he doesn’t know who his team is, nor what to expect from them. That will come to an end late Saturday afternoon after the Huskies are done playing Stanford and its collection of human bridge abutments.

“I think we’re still figuring it out,” Petersen said this week. “We’ve shown we’re inconsistent. But part of that has to do with us having some new players, some young players, and some new guys that maybe have been around here for a while but haven’t played a lot.

“The good teams are really consistent, down in, down out. You’re never going to make every play, but you’re pretty consistent. It’s a work in progress.”

It’s also fair to say a team develops consistency by playing good teams, which the Huskies  did not in their four-game exhibition season. Washington was a big favorite over Hawaii, Eastern Washington, Illinois and Georgia State. However, cake walks were few, to the dismay of large chunks of the fan base.

But in a splendid tribute to the NCAA academic mission, Huskies players can read. They understand fully they were heavily favored, just as much as adults, including Petersen, should understand that men between 18 and 22 are easily distracted. Whether by shiny objects, squirrels, skirts or Vegas odds, they believed they didn’t need to fully apply themselves to win.

Lo and behold, they were right. Why this predictable habit of elite young athletes remains a mystery to coaches is a mystery in itself. But that will be no factor Saturday, when, despite the best efforts of the athletics administration, the Huskies will be forced to engage with a quality opponent.

Stanford, 2-1 with the loss to USC 13-10, is coming off a bye week ranked 16th and a seven- to eight-point favorite to win at Husky Stadium. The Cardinal will have the undistracted attention of the Huskies.

Finally, Huskies fans get to see what the team looks like fully engaged under Petersen.

Stanford coach David Shaw believes he knows what that looks like.

“When you watch Washington at their best, they’re as good as anybody playing right now,” Shaw said this week in Palo Alto. “They’re scary.

“They have moments of absolute dominance on both sides of the ball, and moments where it’s not quite all together. It honestly sounds like a lot of really good teams around the nation . . . I don’t think there’s really a dominant team in college football right now.”

While the remarks are easy to dismiss as the standard smoke that is blown by opposing coaches, the fact is that the Huskies flashed nearly a complete game against Illinois, a Big 10 team that was routed 44-19. Overlooked in a game that had major highlights from the defense, QB Cyler Miles completed 15 of 19 passes for 191 yards and a TD through three quarters. In the same stretch, he had 55 yards in nine carries.

In his first season following graduated Keith Price, Miles has looked a little indecisive at times and eager to run first.

“When you don’t get protected very well, you have a tendency to hurry,” Petersen said. “Your eyes go right to that rush to see if they’re going to protect you or not. So he was a little antsy in there on occasion.

“Cyler hasn’t spent a ton of time in the pocket with real bullets being shot at him. He can move fairly well. It’s a tricky thing, takes a lot more poise than you think, a lot more experience. That’s one of the things we’ve got to do better. We really don’t want to run backwards.”

Petersen watched the film of Stanford’s 31-28 win over Washington in Palo Alto last season — the Cardinal’s sixth win in the seven games against the Huskies coached by Shaw and his mentor/predecessor, Jim Harbaugh — and saw Price complete 33 of 48 for 350 yards, two TDs and a pick.

It demonstrated that Washington can move the ball on Stanford’s formidable defense. Miles isn’t yet Price, but Petersen thinks if Miles learns to move up in the pocket instead of busting outside, success will follow.

“I think it’s always better if you can get up on the pocket . . .  that’s what the protection’s going to be,” he said. “It’s not going to be a brick wall that’s just going to hold up and you’ve got no worries. Price did a good job. He hung in there appropriately and delivered some passes while taking some shots.

“You’re going to have to set your feet and throw the ball.”

Once he does, he will have WR John Ross as a target. Ross, 14th in the nation in all purpose yards with a 155-yard average, sat out the 42-14 win over Georgia State with a sore knee, but will play Saturday.

If Miles steps up, literally and figuratively, Washington has a good chance for a surprise. The guess here is that Petersen has kept tucked away numerous offensive options from a playbook as diverse as any in the FBS.

When he offers full ordnance to a team that is finally excited to play a big-time opponent at home, it could be, as Shaw said, scary.