RENTON — If Zach Miller were a baseball player, he’d probably have a lame nickname like Zachie or Milly. If he played in New England, he’d be called Gronk Lite. But as the most versatile tight end in Seahawks history, … 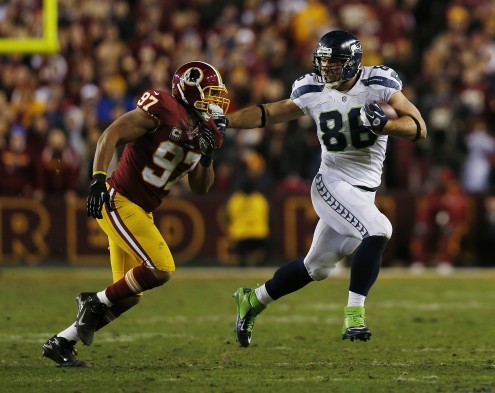 RENTON — If Zach Miller were a baseball player, he’d probably have a lame nickname like Zachie or Milly. If he played in New England, he’d be called Gronk Lite. But as the most versatile tight end in Seahawks history, he has a nickname borrowed from the NBA.

“We call him, ‘The Big Fundamental,'” Russell Wilson said during the preseason. Heady praise: That was Shaquille O’Neal’s nickname for Tim Duncan, the San Antonio Spurs center who has zero flash but does everything well, including helping win five NBA titles.

Miller’s pursuit of a second NFL championship has been temporarily sidetracked. He underwent ankle surgery during the bye week “to clean up some things,” coach Pete Carroll said Monday as the team returned to practice. Miller was attempting to manage the pain but it became too much.

Other than to say Miller would return in the regular season, Carroll wasn’t specific about a date, other than week to week “in a couple of weeks,” he said. Which sounds like about a month.

“It’s been bothering him for a number of weeks,” he said. “He’s been playing with it and we just don’t want him to have yo tolerate it any longer. We want to see if we can fix him up, and hopefully he’ll have a speedy recovery.”

Miller’s loss is a significant blow to the offense. He’s one of the NFL’s best blocking tight ends, which has become even more important this season because he’s helping on the right side a rookie, tackle Justin Britt.

Zach does a ton of things,” Carroll said. “All the little things that he knows how to do — the finesse kind of situation, the motioning, being in the backfield, playing as a fullback as well as a normal tight end. We’ve moved him everywhere.

“He’s a very versatile player, extremely on it and a great tough competitor. We miss a lot with Zach.”

The Seahawks tried out some players, Carroll said, but they decided to fill in-house, meaning more playing time for reserve tight ends Luke Willson and Cooper Helfet, who haven’t seen much action. Willson, 6-foot-5 and 250 pounds, is fast and has good hands, but in his second year is still developing as a blocker.

“He’s going to obviously play a ton now,” Carroll said. “It’s really a great opportunity for him to step up. He’s improved in every area. He’s stronger and he’s faster than he was a year ago. In every way he’s improved.

“This is a lot to ask of him, though. It’s the first time he’ll have this kind of duty. But it’s his turn to step up.”

Helfet returned to play against Denver, all on special teams, after recovering from minor knee soreness.

“He’s in good shape to play,” Carroll said. “He’ll be integrally involved. He’ll be all over it.”

Instead of a tight end, the Seahawks in the past have sometimes used a sixth offensive lineman, usually OT Alvin Bailey, in short-yardage situations. Other options include Garry Gilliam, a reserve offensive tackle, who played some tight end at Penn State, and Cassius Marsh, who also worked the job at UCLA.

With the addition of Percy Harvin to the starting lineup in three-receiver sets that include Doug Baldwin and Jermaine Kearse, the Seahawks have been using fewer two-tight-end sets. But Carroll didn’t say much about play options: “We will see in time how we do. We’re going to continue to do the things we have been doing.”

By keeping Miller on the active roster, the Seahawks are hoping for a quick recovery. They can’t use the one allotted spot for injured reserve/designated to return, because that is occupied by CB Jeremy Lane, who has a groin strain and due back Nov. 9 against the Giants.

The Seahawks play the Redskins in Washington at 5:30 p.m. PT Monday night.

Carroll said everyone else reported back well: “We came back flying.” . . . SS Kam Chancellor’s ankle problems seem resolved “so we might have put that one behind us,” he said.  . . . CB Tharold Simon “should be back to competing here in a couple of weeks.”  . . . RB Christine Michael “has been ready for a week now.”