The Mariners had another statistically odd season as they won 87 games under new manager Lloyd McClendon, a 16-game improvement over 2013. 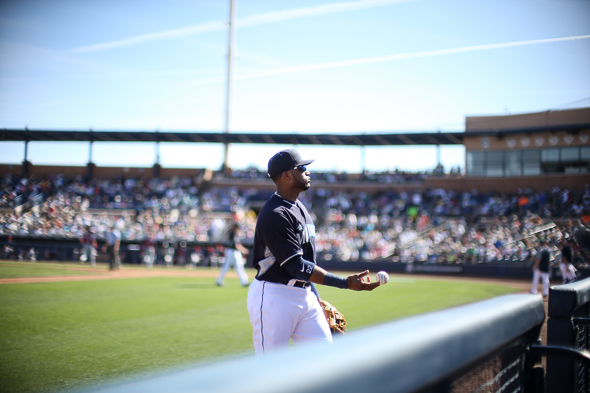 With newcomer Robinson Cano in the lineup, the Mariners scored only 10 more runs than in 2013. / Drew McKenzie, Sportspress Northwest

Perhaps the most telling stat for the 2014 Mariners was this one: After lavishing a 10-year, $240 million contract on All-Star second baseman Robinson Cano, the most significant financial outlay in franchise history, the Mariners increased their run production over 2013 by a feeble 10 runs (634 to 624). So much for adding major bulk to the offense.

The Mariners spent 162 games statistically reeling alternately from dismay to delight. The recorded 10 wins over the winningest team in the majors (Angels), but played sub.-.500 against losers. The won 22 games by five or more runs but lost 27 by one run.

They featured the best pitching in the American League (3.17 ERA), but it unraveled in a four-game stretch from Sept. 20-23 when the Mariners allowed an astonishing 42 runs at Houston and Toronto.

Still, the Mariners chased a postseason berth until the fifth inning of game 162 when Texas lost to Oakland – even after getting blanked a record 19 times, even after six walk-off losses, even after losing 17 times in their opponents’ final at-bat.

Those are among the wild swings that resulted in the club making a 16-game improvement (87-75) over 2013 (71-91) under new manager Lloyd McClendon. These were some others:

2,063,222: Mariners attendance in 2014, marking the first time the club eclipsed two million since 2010. After years of steady – and deserved – decline, the hike represented a major league-best 17 percent increase over 2013.

48: Number of arrows by Fernando Rodney, who established single-season franchise record for saves, breaking the old mark of 45 by Kazuhiro Sasaki in 2001. Not only that, Rodney became the first Seattle closer to lead the majors in saves.

22: Home runs by Mike Zunino, a club record by a Mariners catcher, breaking the mark of 19 by Miguel Olivo in 2011.

19: Times that Seattle suffered a shutout, a franchise record, and three more than the 2011 Mariners. The last Mariner team to lose 100 games (2010) suffered 15 blankings.

16: Consecutive starts by Felix Hernandez from May 18-Aug. 11 in which he allowed two or fewer earned runs in at least seven innings, a major league record (old mark 13 by Tom Seaver in 1971).

15: Strikeouts by Hernandez June 8 at Tampa Bay, most in his career in a no-decision.

12-9, 3.65: Although he ran out of gas at the end, back-of-the rotation starter Chris Young became the bargain of the year – one year, $1,25 million — by winning 12 games and eating 165 innings, his highest total since 2007. Seattle signed Young during the spring after he was cut loose by the Washington Nationals.

9: Relievers used by McClendon Thursday in Seattle’s 7-5 victory at Toronto, enabling the Mariners to become the first club in major league history to win a nine-inning game in which it used nine or more pitchers, none of whom worked more than two innings.

2.59: Team ERA posted by Seattle’s bullpen, seventh-lowest in a season in the era of the designated hitter (1973).

4: Consecutive games from Sept. 20-23 in which the Mariners allowed eight or more runs. That matched the franchise record for such a dubious feat, but measured by ERA ,it amounted to the worst short-term pitching crash in franchise history. The Mariners posted an ERA of 11.25 over the four games, topping the old mark of 11.03 from May 20-24, 2008.

3: Hernandez, Cano, Kyle Seager and Fernando Rodney made the All-Star team, the first time Seattle has had three or more since 2003. Seager became the first Seattle third baseman selected since Edgar Martinez in 1992.

2: Walk-off wins by the Mariners, virtually bookending the season. Kyle Seager delivered the first, a three-run homer against Houston April 23, and Austin Jackson produced the last with an RBI fielder’s choice Sept. 27. Jackson’s marked the first time since July 18, 1989 that Seattle won a game on a walk-off fielder’s choice (Dave Valle). This is also the first year since 1983 that Seattle has had as few as two walk-off wins in a season.

2: Roenis Elias (June 1 at Detroit) and Taijuan Walker (Sept. 24 at Toronto) became the first two rookie pitchers to toss complete games in the same season since Freddy Garcia and John Halama in 1999.

0: Mariners did not hit a single grand slam.