As youngster, Wilson ‘used to beat people up’

In an essay for a new athlete website founded by Derek Jeter, Russell Wilson describes himself in elementary and middle school as a bully, and writes about domestic violence. 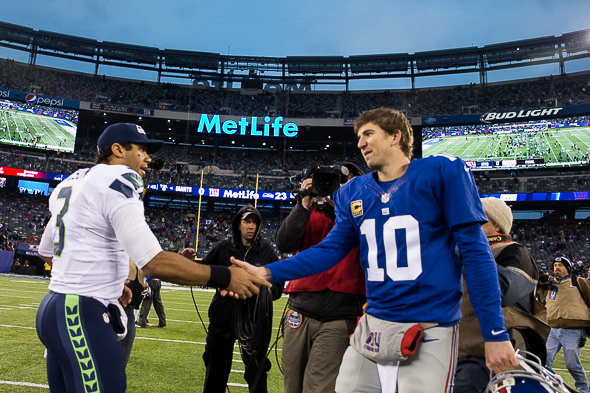 Russell Wilson is branching out into new fields: Publishing and philanthropy. In an essay for a new website, The Players’ Tribune, launched Thursday by retired Yankees icon Derek Jeter, the Seahawks quarterback opened up about his youth in which he admitted to being a bully.

“I used to beat people up,” Wilson wrote. “Truthfully, I used to beat people up a lot. Many of you readers probably think I have been Mr. Goody Two-Shoes my whole life, but honestly, I was a bully growing up. In elementary and middle school, I threw kids against the wall. I rubbed their heads in the dirt at recess. I bit them. I even knocked teeth out.

“I had a lot of anger that I didn’t know what to do with. Thankfully, I was saved by my faith when I was 14 years old and was able to start living for others instead of just myself. But if you’ve ever been at the bottom of a pile with me, you know that I still have a bit of that bully deep down inside. Just ask DeMarcus Ware.”

The latter was a reference to a fumble by Wilson near the goal line in the game against the Broncos Sept. 21 that Wilson described afterward.

Teammate Richard Sherman, who said early Thursday afternoon he saw a synopsis but hadn’t read Wilson’s story, was surprised by the disclosure.

“He said that he use to beat people up — that’s a surprise,” he said. “Obviously, he said he’s turned a different page in that book. But it’s still pretty interesting to see that.”

Wilson is called a senior editor of the site, which proposes to be “The Voice of the Game,” by publishing “insight into the daily sports conversation and to publish first-person stories directly from athletes,” according to a letter to readers on the site by Jeter, who managed to keep site plans a secret in the world’s media hub of New York.

Jeter, who in a splendid 20-year playing career strenuously avoided saying anything of substance about team or social issues, chose as a first story a provocative, brief description by Wilson of his childhood, although no specifics are given about the incidents. He used the admission to address domestic violence, a subject that has the NFL churning.

“As NFL players, we do not play a gentle game,” Wilson wrote. “But our hits, our anger, our aggressive behaviors need to be regulated and confined to the field.

“Recent incidents of domestic violence have forced the league, its fans and the players to take a hard look into our collective conscience. To be honest, many NFL players are reluctant to address such a sensitive issue. How do you fix a problem so big and complex? How do you speak about something so damaging and painful to families? What can we do to help?”

Wilson explained that he has developed the Why Not You Foundation.

“I’ll be raising funds and awareness for a number of worthy causes,” he wrote. “It’s a place where I plan to give back, and for my first initiative, I want us to Pass the Peace to support victims of domestic violence.

“The idea behind Pass the Peace is simple: It’s a promise. I’m sharing my love for you. I want to take care of you. I am here for you.”

He hopes for a broader reach than the NFL.

“It’s not unique to my profession,” he wrote. “It’s not confined to America. All over the world, right at this moment, men, women and children are taking refuge in anonymous shelters. Many more are suffering silently, without protection. Every day, up to 10,000 Americans are turned away from shelters due to lack of resources.

“This issue is much bigger than NFL suspensions. Domestic violence isn’t going to disappear tomorrow or the next day. But the more that we choose not to talk about it, the more we shy away from the issue, the more we lose.”

Coach Pete Carroll said he spoke Wednesday with Wilson about his story and read it Thursday morning.

“I’m really proud of him,” he said. “He’s involved himself in a very critical issue. Maybe he can elevate awareness, like we’re all trying to do, for the right reasons. I think his statements were very well thought out and very clear.

‘Pass The Peace’ is a pretty cool thought. I think it fits him very well. I’m hoping, more than that, it has a great impact. We will support him in every way.”

Carroll said he had no misgivings about players who take a stand regarding social causes by reaching directly to fans.

“No problem at all with our guys doing what they’re capable of doing,” he said. “Some of our guys are extremely gifted and they have an ability to connect. There’s a risk that guys take by going out there, but I support our guys.

“We have some really brilliant kids that have a lot to offer and are willing to see what they can do to influence social change. I couldn’t be more proud of that. Richard (Sherman) has done a great job of putting himself out there. Marshawn (Lynch) has done a bunch of great work.”

Wilson did not mention any of the recent episodes of domestic violence involving NFL players, nor did he address the NFL’s controversial responses.