Seahawks need to be wary of ‘Hardy effect’

After running the Rodgers-Rivers-Manning gauntlet, the Seahawks draw Kirk Cousins, not to be dismissed despite his four picks vs. the Giants. 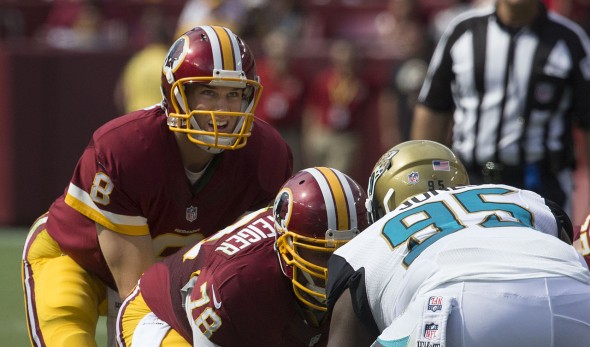 The Seahawks Monday will face Kirk Cousins, coming off a four-interception game against the Giants. / Wiki Commons

The Seahawks are seven-point picks to extend their record to 3-1 when they contest the 1-3 Washington Redskins at FedEx Field. It’s difficult to find a number that doesn’t favor the Seahawks, making their only appearance on Monday Night Football this season, starting with the fact that no team historically does Mondays better than Seattle.

The Seahawks possess the NFL’s highest winning percentage on Monday Night Football with a record of 20-8 (.714). They won eight consecutive games under the lights, outscoring their opponents 208-65. That includes three shutouts.

In addition to their Monday record, the Seahawks are 10-1 in prime-time games under coach Pete Carroll, bludgeoning foes 286-128, won 22 of their last 27 regular-season games, and are 31-12 dating to the final half of the 2011 season. The Redskins, meanwhile, have lost six in a row in prime time and are 4-14 on Monday nights since 2000.

In 10 prime-time appearances with Seattle, Marshawn Lynch has four 100-yard rushing games and scored nine touchdowns. In his last prime-time game, against Green Bay Sept. 4, he ran for 110 and two touchdowns.

The Seahawks score more points, allow fewer, are hit with far fewer penalties (39-19) and have a better turnover differential (0 to -5) than Washington. The Redskins are also coming off a 45-14 loss to the New York Giants, a team Seattle beat last year 23-0, and will be playing with their backup quarterback, who just threw four picks to the Giants, giving him a 53.0 passer rating.

Cousins played a wretched game against the Giants, in which he telegraphed his four interceptions and fumbled once.

Oddsmakers believe the Legion of Boom should be licking its chops. But before his calamity against the Giants, Cousins threw for 677 yards, five touchdowns, one interception and posted passer ratings of 109.4 (Jacksonville) and 103.4 (Philadelphia). Against the Eagles, Cousins completed 30 of 48 for 421 yards and three scores.

“The (first) three guys that we went against (Rodgers, Rivers, Manning) were the premier quarterbacks in the league,” Carroll said this week. “We understood that and dealt with that accordingly. But Kirk threw for 400 yards a couple of weeks ago, so he’s done some really good things, in a wide-open offense, too.”

Despite his numerous turnovers against New York, Cousins still threw for 250 yards and has several options at his disposal, notably DeSean Jackson, Niles Paul, Pierre Garcon and Roy Helu, all viable targets and all averaging more than 10 yards per catch.

The other reason not to dismiss Cousins: While the Seahawks have beaten Rodgers (twice), Tom Brady, Manning (twice) and Drew Brees (twice) since the start of 2012, they have also lost to John Skelton (Arizona), Matt Stafford (Detroit), Ryan Tannehill (Miami) and an aging Carson Palmer (Arizona). In fact, the Seahawks have been beaten twice by Skelton since 2011.

Monday night’s game should end with a Seahawks blowout. Should is the key word. Whatever we think will happen in the NFL is typically the exact opposite of what actually happens.

This has been true since a quarterback named Jim Hardy made it so on the first two weekends of the 1950 season. In Week 1, playing for the Chicago Cardinals, Hardy tossed a league-record eight interceptions in a 45-7 loss to the Philadelphia Eagles.

The following week, in an inexplicable and epic reversal, Hardy tossed a league-record six touchdowns (and had a seventh dropped in the end zone) in a 55-13 win over the Colts.

Who could have figured that?