After setting a school record with 812 yards of offense, Cougars miss 19-yard FG attempt with 15 seconds left and fall 60-59 at home to Cal. 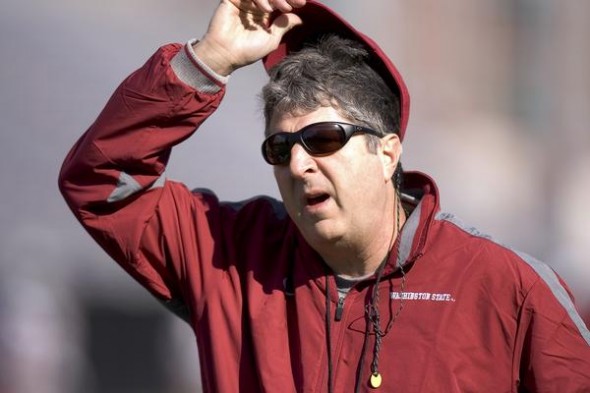 Huh? What? How did that last one slip in there?

Oh, how ye Crimson faithful would have loved to crow about being sole occupants of first place in the Pac-12 Conference’s North Division after beating California. The fact that the Huskies currently reside in last place would have made victory that much sweeter.

When WSU led California 10-0 and 24-10 and 45-34 and 52-41 Saturday night, the long-suffering Cougars seemed destined to reign over the North, however briefly. No sane individual expects Wazzu to wind up on top at season’s end, but you take what you can get at a school that lays claim to only four conference football titles after almost a century of competition.

Leave it to the Cougars to lose a remarkable game – and their shot at first place — in remarkable fashion. On a night when Connor Halliday passed for a national-record 734 yards; Vince Mayle caught 11 passes for a school-record 263 yards; and WSU amassed a school-record 812 total yards; the Cougars lost 60-59.

Breshears’ kick, which barely missed wide right, came on third down after Halliday used WSU’s final time-out. The Cougars had the ball 1½ yards from the goal line and could have run another play before using the time-out to set up a field-goal try.

“We probably should have done that,” Leach said.

Leach said he wishes Halliday had thrown one last pass on third down. The quarterback made it clear that he didn’t think it was necessary, given the circumstances.

Technically, Halliday was a yard off. Let’s not get technical after a memorable contest in which two young teams with paper-maché defenses combined for more than 1,400 yards.

Leach tried to take the onus off Halliday by claiming he called the time-out, but Halliday would have none of that.

“That was my move,” Halliday said in his typically blunt, honest manner.

The time-out call might have been Halliday’s only questionable decision all night. He completed 49 of 70 passes, had no interceptions and threw six touchdown passes to tie a school record he already shared. The 734 passing yards topped the major-college record of 716 set by Houston’s David Klingler in 1990.

“It’ll be fun to look back on when I’m 30 years old and talking to friends and family,” Halliday said.

That’s easy for Goff to say, since he set a career high for passing yards against WSU for the second consecutive year. The talented sophomore completed 37 of 53 passes for 527 yards and five touchdowns.

Halliday and Goff were at their best in the third quarter, when each team scored four touchdowns. The only time Davis was touched on his kickoff returns came when teammates joined him in the end zone.

“We’ve done some good things on kickoffs up to this point,” Leach said. “I don’t know what the lapse was.”

Leach spared the media too many details regarding lapses in Washington State’s defense. That was a good thing, considering that WSU’s press conference wound up around midnight after a game that required more than four hours. No doubt some of the 30,000-plus homecoming fans climbed into their jammies at halftime.

It is painfully clear that WSU’s promising young secondary is not ready for prime time. California also has an inexperienced secondary prone to disaster – the Bears have yielded 49 or more points in three consecutive games – but the Bears would be 5-0 if not for Arizona’s Hail Mary pass on the last play of the game a couple weeks back. The Cougars are 2-4 – the opposite of a year ago – and must win four of their remaining six games to be considered for a second bowl game in a row.

The task won’t get easier Friday when the Cougars visit 14th-ranked Stanford (6 p.m., ESPN). The Cardinal has won the past six meetings with WSU, and most of the scores have not been pretty. Halliday says nothing would be uglier than a 2-5 record after Palo Alto.

Get used to it, kid. That’s what happens to teams that have a knack for turning must-win games into can’t-win games.

Make no mistake, however: Halliday’s right arm, and his mastery of Mike Leach’s Air Raid offense, are magical. It does not hurt that WSU has one of the most talented and deep receiver corps in the country, though a rash of drops Saturday included two in the end zone.