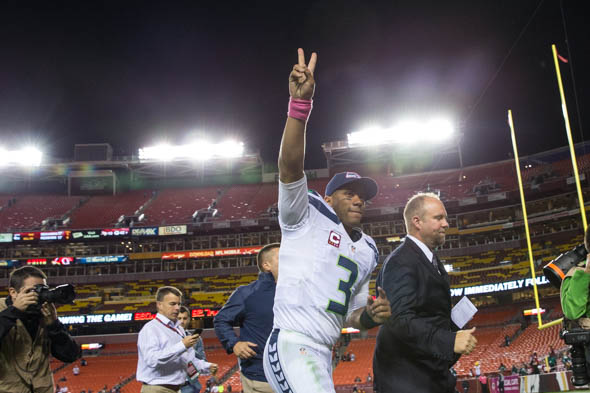 In the minds of some, Russell Wilson might not rank among the NFL’s elite quarterbacks. But he has an amazing capacity to figure ways to engineer victories. Ten days removed from directing an 80-yard overtime drive to beat Denver, Wilson made at least a dozen dazzling — even ridiculously impressive  — plays Monday night in leading the Seahawks to a 27-17 victory over the Washington Redskins at FedEx Field.

The Seahawks improved to 3-1 and moved into a first-place tie with Arizona for the NFC West lead, despite having three touchdowns by Percy Harvin called back due to penalties. Wilson was the principal reason Seattle, a seven-point favorite, escaped with the victory despite the Harvin setbacks.

Wilson’s key play among many: Facing third and four at the 50 with 2:33 remaining and the Seahawks clinging to a 24-17 lead, Wilson was flushed from the pocket, darted to his left and, under intense pressure, flipped an almost absurd short pass to Marshawn Lynch, who turned the play into a 30-yard gain that set up a 43-yard field goal by Steven Hauschka that iced the win.

Wilson made some history. In addition to passing for 201 yards and touchdowns to Jermaine Kearse and Lynch, and posting a 127.3 passer rating, Wilson rushed for a Monday Night quarterback-record 122 yards on 11 carries and scored a touchdown.

The Seahawks needed all of that because they were flagged 13 times for 90 yards, turning a contest they should have won easily into a nail-biter.

“Percy Harvin scores three touchdowns and all of them are called back. I thought the penalties really killed us,” said Wilson. “But we persevered. We could have played a lot better, but it means a lot to come out on the road and win. At the end of the day, it comes down to winning, although it was a bit ugly on our side. We just couldn’t get into any kind of rhythm.”

The Seahawks came up with enough big plays to prevail. Wilson rushed for 80 of his 122 yards in the game’s first 10 minutes and completed Seattle’s first drive with a 15-yard touchdown pass to Kearse.

After Hauschka drilled 43-yard field goal at 9:04 of the second quarter, Wilson ran nine yards for a touchdown and a 17-0 lead.

Aside from the late Wilson-Lynch play in the final two minutes, the biggest play occurred early in the fourth quarter when, facing fourth and one, head coach Pete Carroll had holder Jon Ryan go for it out of field-goal formation.

Ryan, who had another spectacular day punting, ran five yards and picked up the first down, setting up Wilson’s nine-yard TD to Lynch that gave the Seahawks a 24-10 lead.

Wilson, whose previous rushing high was 102 yards at Indianapolis Oct. 6, 2013, broke the Monday Night record by a quarterback held by Donovan McNabb (107 yards in 2002).

With the victory, the Seahawks improved to 21-8 on Monday Night Football, the NFL’s best mark (.724). The Seahawks are 11-1 in prime-time games under Carroll. Monday’s win marked the first time that Seattle has won in the Eastern time zone following a bye week.

Harvin had a 16-yard TD run called back due to a holding call on James Carpenter, a 26-yard TD pass nullified due to a motion call on Harvin, and a 41-yard TD pass from Wilson erased due to an unnecessary roughness flag on Carpenter . . . The Seahawks have won 23 of their last 28 regular-season games . . . Wilson has quarterbacked 27 wins, most by a player in the first 36 games of a career . . . The Seahawks are 20-3 when Wilson has a passer rating above 100.0 . . . Lynch has caught three touchdowns in the first four weeks  . . . C Max Unger left the game in the fourth quarter with a foot injury, replaced by Steve Schilling. Unger returned late and Carroll said afterward that it wasn’t serious.

The Seahawks return to CenturyLink Field Sunday to face the Dallas Cowboys, who are off to a 4-1 start. Kickoff is scheduled for :25 p.m. on FOX.