In a game marred by penalties, drops and other mistakes, the Seahawks were rescued largely by Russell Wilson, whose large life grew larger on Monday night in the capital. 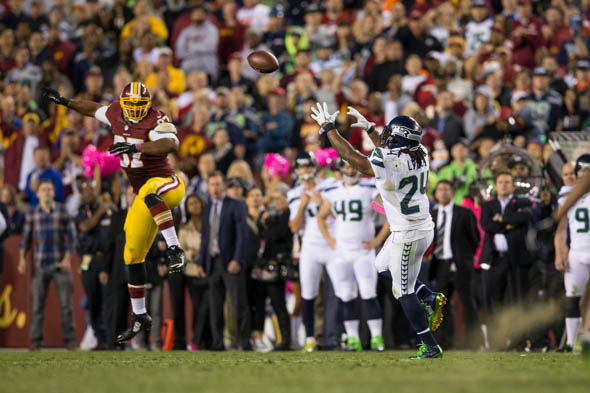 RB Marshawn Lynch grabs a floater from Russell Wilson that he turned into a 30-yard gain late in the fourth quarter Monday night in Washington, D.C. / Drew McKenzie, Sportspress Northwest

The Seahawks spent a lot of time Monday night in Washington, D.C., falling down flights of stairs. Nearly every time, Russell Wilson was there, picking them up, dusting them off and pointing them back up the stairs. Fifty-two-man pickup.

Then, on third-and-four from the 50 with less than three minutes remaining in an unexpectedly tense 24-17 contest against a team that had lost 11 of its past 12, Wilson picked up everyone in white and carried them home. All else watching . . . they just swooned.

Wilson tried to roll right, was cut off and commenced a full-sprint retreat for nearly 20 yards with three Redskins in pursuit. Amid the chaos of a shattered play, he saw Marshawn Lynch, alone after faking a run to start the play.

A moment before getting clobbered again, Wilson softly looped the ball 15 yards, in a manner of an office worker throwing a wad of paper to a waste basket. Lynch gathered the floater and burst through the scattered Washington defense for 30 yards. A few moments later, Steven Hauschka bled the game of drama with a 43-yard field goal.

The 27-17 triumph was mostly a nervous cough for Seattle — 13 penalties for 90 yards, three of which called back touchdowns by Percy Harvin, made for no songs. But Wilson, in the nation’s capital and a two-hour drive from his hometown, capped a week of national headlines about himself with perhaps his most versatile game yet.

“He was phenomenal,” said coach Pete Carroll. “The bootlegs are part of the game plan, but the scrambles are his decision. For everyone to be right (without fouls) on the chaos of (the Lynch pass play) was amazing.”

Planned or unplanned, Wilson’s evening was a dazzler that made it into the NFL record books. His career-high 122 yards rushing were the most for a QB in a Monday night game, and he was the third QB in the past 12 seasons to pass for 200 yards and a TD, and rush for 100 yards and a TD in any game (Michael Vick, Cam Newton).

In leading the 3-1 Seahawks to their ninth consecutive Monday night win (tied for the second-longest streak in the series’ 45 years), Wilson had no turnovers but took three sacks and presided over an O-line that committed at least eight pre-snap violations. The Seahawks were missing TE Zach Miller due to injury, but that can’t explain much.

“The line did a tremendous job fighting for me,” Wilson said. “The sacks were mostly on me. I could have hit (a receiver) quicker. The penalties are things we can fix.”

But the combination of errors following a 17-7 halftime lead kept Seattle without a first down through the first five possessions of the second half. The offense consistently messed up good field position provided by punter Jon Ryan and special teams. Wilson finished with 18 completions in 24 attempts, but at least four incompletions were drops by the usually sure-handed receivers.

The Seahawks, who won a Super Bowl despite leading the NFL in penalties, seemed to have the problem under control through three games, then fell apart Monday, including two holds and a motion penalty that denied Harvin the end zone.

Wilson joked with Harvin, who, like Wilson, is a Virginia native.

The Redskins gave no love to Wilson, either. Besides the sacks, several of his 11 rushes ended with licks harder than he usually takes.

“I took one good hit tonight,” he said after a gain in which he was struck high from the side and behind. “I was hit from behind when I wasn’t expecting it. But I’m fine.”

Of his pass to Lynch, whose five catches led Seattle, Wilson said, “I was just trying to hang in there as long as I could. Marshawn did a great job with the run fake, and then he was able to get behind the defense.”

Wilson was in the news last week when he opened his foundation and wrote for the debut of the Derek Jeter-founded Players’ Tribune website about his adolescent days as a schoolyard bully. He also kicked off a viral campaign, “Pass the Peace,” to help with domestic violence awareness.

Then he flew home to the D.C. area Friday, where his last game visit after the 2012 season included a playoff triumph over the Redskins to give Seattle its first road playoff victory in 30 years.

“I had tons of friends and family here, including my mom and sister,” he said. “Being back home means a lot, then to come up huge . . . ”

After dazzling Denver with a game-winning drive, Wilson came up big in New York for publishing and in Washington on another national platform that had the ESPN TV crew foaming at his feats. Next is Texas, with the Dallas Cowboys coming to the Clink Sunday.

The man has had himself a couple of weeks.