Russell Wilson not only produced numerous big plays, but one of the more unusual games by a quarterback in Super Bowl-era history. 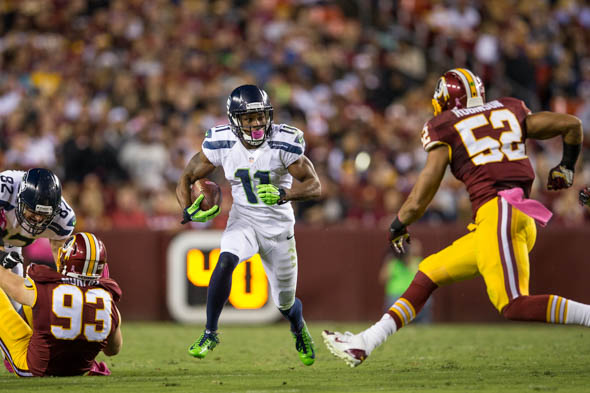 While fantasy owners sank into despair (or cried themselves to sleep) over three Percy Harvin touchdowns scotched by penalties, Russell Wilson produced one of the most remarkable games of his NFL career Monday night in Seattle’s harder-than-it-had-to-be 27-17 victory over the Washington Redskins at Fed Ex Field. His big plays aside, Wilson’s was one of the most unusual performances by a quarterback in the Super Bowl era.

Wilson threw for 201 yards (touchdown passes to Jermaine Kearse and Marshawn Lynch) and ran for a Monday Night record 122. That marked the second time Wilson exceeded 200 passing and 100 rushing yards in the same game. He had 210 and 102 at Indianapolis last season.

Wilson is the third quarterback in the Super Bowl era (since 1966) with two such games, including regular season and playoffs.

Tobin Rote, who played from 1950-66, mainly with Green Bay and Detroit, also had two such games, one in 1951, the other in 1952, playing for the Packers, according to Elias Sports Bureau. But since Rote, these are the six games that featured a 200-100 double by a quarterback:

Note that three of the six games were played Oct. 6, including the two by Wilson.

Wilson also went 2-for-2 on red-zone passes against the Redskins with both resulting in a touchdown. Wilson improved to 9-for-11 (81.8%) on red-zone passes this season, second in the NFL behind Atlanta’s Matt Ryan (11-for-13, 84.6%). Last year, Wilson’s completion percentage in the red zone was 50.9 percent.

In four career appearances on Monday Night Football, Wilson has thrown nine touchdown passes, no interceptions and has a passer rating of 123.05.

If not for two penalties on James Carpenter and one on himself, Percy Harvin would have had one of the great games in the history of Monday Night Football. But the three flags wiped out a trio of Harvin touchdowns, a 16-yard run and 26-yard catch on back-to-back plays in the second quarter, and a 41-yard catch in the fourth.

Carpenter nullified the 16-yard run with a holding penalty, Harvin was nailed for a false start on the 26-yard catch, and Carpenter was found guilty of a unnecessary roughness call on the 41-yard TD play. Carpenter’s last penalty — pouncing on a Washington player when he was already on the ground — was particularly stupid because Harvin was well on his way to a TD before Carpenter’s gaffe.

In the Pete Carroll era (since 2010), the Seahawks have had 12 TDs nullified by penalties, including Harvin’s three Monday.

In the Carroll era, the only player aside from Harvin to lose two touchdowns to penalties was returner Leon Washington, who had an 81-yard punt return against Cleveland nixed in 2011 and an 86-yarder against Buffalo wiped out in 2012. Carroll’s 12 “lost” touchdowns:

Notice that Carpenter is the only player to commit more than one of the touchdown-erasing penalties.

Although Monday marked the first time Carroll has lost three touchdowns in a game as a result of flags, it’s not the first game in which he three times lost points. On Oct. 24, 2010, Olindo Mare had field goals of 31, 41 and 56 yards zapped by flags. But in each case, Mare successfully converted field goals on the same drive after the penalties had been assessed.

Since 2000, only one Seahawks player other than Harvin had three touchdowns cancelled by penalties.

In 2001, Shaun Alexander lost an 18-yard TD pass from Trent Dilfer against Jacksonville due to an interference call on Koren Robinson. In 2002, Alexander had a 20-yard TD run called back because of a holding call on Robbie Tobeck. And in 2003, a nine-yard TD pass from Matt Hasselbeck to Alexander went up in smoke when TE Itula Mili was nailed for an illegal shift.