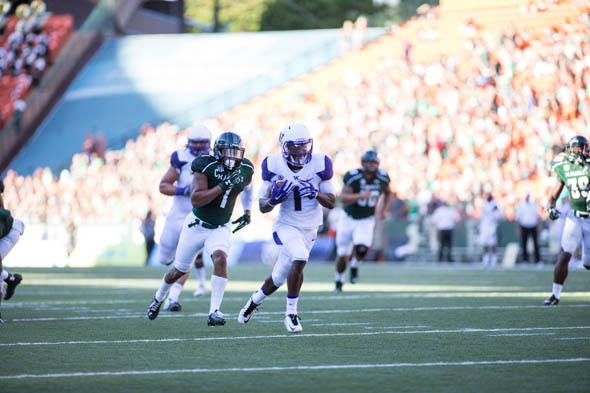 Monday night at FedEx Field in Washington, D.C., Percy Harvin of the Seahawks had the unprecedented experience of watching three of his touchdowns called back due to penalties: A 19-yard run in the second quarter (holding) and back-to-back receptions of 26 (false start) and 41 yards (unnecessary roughness) in the fourth. The last one left Harvin shaking his head.

If any player can remotely relate to Harvin’s frustration, it would be John Ross, a University of Washington fly guy built along Harvin lines: 5-foot-11, 180 pounds and equipped with Harvin-like 4.2 speed.

Had either 100-yard return counted, Ross would stand alone in the UW record books for most career 100-yard kickoff returns for touchdowns. The only other player with a 100-hard KOR TD: Paul Arnold (1999-02), who had his in 1999 against Air Force.

Ross had his only 100-yarder that counted in December’s Fight Hunger Bowl against Brigham Young. Even though two since have been called back, evidence suggests we haven’t seen the last big play out of the Long Beach, CA., sophomore.

Although his was lost in an avalanche of eight Husky touchdowns, Ross formally introduced himself to UW fans in the third quarter of last year’s 56-0 rout of Idaho State at Husky Stadium. At 6:12 of the third quarter, Ross snatched a pass from Cyler Miles, mopping up for Keith Price, and took it 57 yards for a touchdown.

Hugh McElhenny: The 100-yard punt return vs. USC is still the conference record. A member of the College Football Hall of Fame and Pro Football Hall of Fame, McElhenny is the only player in UW history with three 90-yard scoring plays (Ross is second with two). In addition to the punt return, McElhenny had a 96-yard kickoff return against Minnesota in 1949 and a 91-yard run against Kansas State in 1950.

Spider Gaines: All of Gaines’ 50+-yard TD plays came on pass receptions from either Warren Moon or Tom Porras. The 78-yard TD from Moon was the winning play in the 1975 Apple Cup. Gaines produced two of his big plays against Alabama in 1978, catching TD passes from Porras of 74 and 58 yards in Washington’s 20-17 loss.

Reggie Williams: Like Gaines, all of Williams’ long scoring plays came on passes. Cody Pickett threw five of the six, including the longest. Casey Paus threw the other, a 63-yarder against Oregon in 2002.

Napoleon Kaufman: All of Kaufman’s long scoring plays came on runs except for a 65-yard punt return against Stanford in 1992. Kaufman scored 34 touchdowns during his Husky career, with a single-season best of 14 in 1993.

Paul Arnold: Three of Arnold’s 50+-yard plays came on passes from Pickett and a fourth came on an 80-yard run against Washington State in the 1999 Apple Cup.

Charles Frederick: Two of Frederick’s long plays came against Oregon State in 2003 when he scored on an 87-yard pass from Pickett and on an 86-yard punt return. In that game, a 38-17 Washington win, Frederick produced a school-record 371 all-purpose yards, 216 of them receiving.

Charlie Mitchell: A member of Washington’s 1961 Rose Bowl team and the school’s leading receiver in 1962, Mitchell had his most notable performance in the Huskies’ 41-12 victory over Idaho in 1960, scoring on an 85-yard kickoff return and on an 85-yard run.

Dave Williams: Recently selected for induction into the Husky Hall of Fame, Williams tallied two of his four long TD plays – receptions of 56 and 50 yards from Tod Hullin – in one quarter against UCLA in 1965. That was the game in which Williams set a still-standing school record of 257 receiving yards.

Jermaine Kearse: The future Seahawk’s longest play came on a pass from Keith Price in the 2011 Alamo Bowl against Baylor. Two of Kearse’s long plays occurred in the Apple Cup: 66 yards from Jake Locker in 2010 and 50 yards from Locker in 2009.