Fox, Ch. 13 in a fight for prize of NFL telecasts

FOX so wants to own a station in Seattle market that bought one in Bellingham as leverage against KCPQ’s owners. Losers could be some South Sound Seahawks fans. 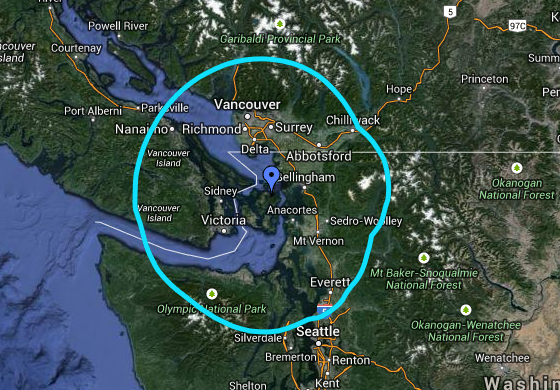 The approximate broadcast-signal reach of KBCB in Bellingham, which has been purchased by Fox and could become home to Seahawks over-the-air telecasts.

The popularity of the Seahawks in the Seattle-Tacoma market and of the NFL in general has prompted a long, fruitless negotiation between FOX TV Stations Group to buy Seattle-based KCPQ Channel 13, which this season carries nine Seahawks games, including Sunday’s game at the Clink against the Dallas Cowboys.

Unsuccessful in its bid to own and operate a station in the Seattle market, FOX ratcheted up pressure this week by buying, according to Federal Communication Commission documents, a small station in Bellingham, KBCB-TV. It also gave Tribune Media Co. of Chicago, owners of KCPQ, 120 days notice, per contract, that FOX will end its affiliation in Seattle. If FOX makes good its threat, Channel 13 after Jan. 17 will no longer carry NFL games and other prime-time FOX programming.

The $10 million purchase of KBCB and subsequent notice to Tribune raised the stakes for FOX, which is amid an aggressive campaign to own and operate stations that carry the NFL, to get into even the fringe of the Seattle-Tacoma market.

If FOX, which has 12 stations in the 16 markets of the National Football Conference — for which FOX owns the broadcast rights — leaves KCPQ, that won’t mean much to the typical Puget Sound-area NFL fan who gets FOX programming via cable or satellite TV.

But if your household is among the small but growing number that get football free on an old-fashioned, over-the-air broadcast signal, you will be out of luck if you live south of central Seattle.

That’s currently the geographic limit of KBCB’s southerly signal reach for a channel that  carries only a 24-hour syndicated shopping channel and has no staff or news operation. It was owned by Venture Technologies Group LLC.

Nielsen Research data says that as of early 2014, 6.3 percent of households in the Seattle-Tacoma market consume TV via free broadcast signal, compared to 66.9 percent by cable and 27 percent by satellite.

Six point three may not sound like much, but in this market, the number outside of KBCB’s reach is about 70,000 households, according to a source familiar with the negotiations.

That would represent a lot of irked 12s.

The over-air market share for broadcast grew from 5.7 percent a year earlier, largely a reflection of an increasing trend among consumers who are fed up with price spikes for cable and satellite, as well as a small but growing cohort of “cable-nevers,” mostly younger consumers who prefer get their shows from subscription services such as Netflix and Hulu, and use free broadcast channels for sports and local news.

Tribune, which recently grew its ownership of TV stations around the country from 23 to 42 while divesting itself of a struggling newspaper division that included the Los Angeles Times and Chicago Tribune, is not eager to part with its place in Seattle.

KCPQ produced for Tribune $13 million in earnings before interest, taxes, depreciation, and amortization in 2013. KCPQ uses only 10 hours weekly of FOX’s non-football programming, from 8 p.m. to 10 p.m. Monday through Friday.

Tribune released a statement Sept. 23 that said it is “continuing to engage in discussions with Fox and moreover have prepared for all operational and economic possibilities for our Seattle Fox station. We are confident that our remaining thirteen Fox affiliates will remain unaffected, based on regulatory and contractual constraints.”

According to a Wall Street Journal story Tuesday about the FOX pursuit, “talks have gone nowhere and have gotten increasingly acrimonious, according to people familiar.”

The loss of Fox programming, especially the NFL, would be a blow to KCPQ, which uses the huge NFL audience to promote its prime-time shows and its news programs. The latter are usually fourth in the four-station ratings race in most day parts with KING, KOMO and KIRO in the rapidly shrinking audience for appointment-TV local news.

Pam Pearson, KCPQ vice president and general manager, released a statement that said, “Tribune Media has issued a statement on the discussions between KCPQ’s owner Tribune Media and FOX.  As for KCPQ, we are focused on bringing ten hours a day of quality news as well as sports, including the Seattle Seahawks, to Seattle and Tacoma and all of Western Washington.”

A source at KCPQ who did not want to be named said that a loss of affiliation would be hard but not necessarily a death blow. The station could operate as an independent while maintaining its established news programming, the source said.

Despite FOX’s success in buying into other markets, it has found no takers in Seattle, although sales have occurred. KING’s parent company, Belo, was bought last year by powerhouse Gannett, and locally owned Fisher Broadcasting, longtime operators of KOMO, was purchased last year by Sinclair Broadcasting of Baltimore. Cox Media of Atlanta, owners of KIRO, reportedly has resisted FOX offers for years.

In 2013, FOX bought two stations in Charlotte, home of the Panthers, from Raleigh-based Capital Broadcasting. Earlier in 2014, FOX swapped stations in Memphis and Boston for two Bay Area stations owned by Cox.

By owning stations outright, FOX can make more money from subscription fees, called retransmission fees, than by contracting with affiliate stations owned by other companies. In Seattle, there’s also a hotter advertising market around Seahawks and NFL games.

But in buying KBCB, closer to Canada than Seattle 90 miles south, FOX would have to invest millions to build the sort of news and programming operation that it prefers in all of its other owned-and-operated stations. Even then, it would be the fifth news station in the market and the seventh commercial station, which industry observers consider an over-saturation for the nation’s No. 14 market.

And FOX might have to placate angry South Sound Seahawks fans by buying other stations in the market with a signal that can reach them.

Nathaniel Brown, a FOX Television senior vice president for communicationsin New York, said Friday the company had no comment and referred questions to the FCC filing for the station purchase.

Sources say Tribune was aware of pending threat of a loss of affiliation, and has not budged. But now that the 120-day clock has started to an end that is in the middle of the NFL playoffs, FOX is counting on a change of mind concerning KCPQ’s most valuable program.

For South Sound fans who enjoyed their Seahawks on free TV, they may find themselves sidelined in the final minutes of the season.