The top-ranked Seahawks rushing defense will get its toughest test this week in DeMarco Murray, looking for his sixth consecutive 100-yard game. 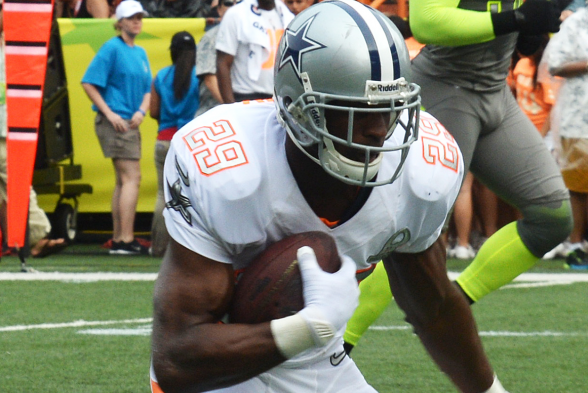 As was the case Monday, when the primary focus was stopping Washington’s Alfred Morris, the Seahawks will be tasked with another challenge Sunday in DeMarco Murray, the Dallas Cowboy who leads the NFL with 670 rushing yards and five TDs. Murray seeks his sixth consecutive 100-yard rushing game. If he gets it, he will tie Hall of Famer Jim Brown’s 1958 NFL record for the most such contests to start a season.

Point of comparison: Marshawn Lynch has never rushed for 100+ yards in six consecutive games. His best streak is four, done twice during the 2012 season when he finished with a career-best 1,590 yards and 11 touchdowns.

Since 2012, Seahawks coach Pete Carroll’s teams are 5-2 when the opponent produces a 100-yard rusher. Among the five: Two years ago, the Seahawks withstood a 182-yard effort by Adrian Peterson and defeated Minnesota 30-20. Last year, Seattle weathered a 158-yard show by Mike James and beat Tampa Bay in overtime.

San Francisco administered the two losses. Frank Gore exceeded 100 yards in both games, including 110 Dec. 8. Gore is the last 100-yard rusher allowed by the Seahawks, who haven’t come close to allowing one this season. The most they’ve ceded: 38 to Denver’s Montee Ball in Week 3.

The Cowboys have won four in a row and are tied with Philadelphia and San Diego for the best record in the NFL at 4-1. They enter the Clink averaging 160 rushing yards per game to face a Seattle defense that allows 62.3, best in the NFL by a margin of 8.7 yards over Buffalo.

A year ago, the Seahawks allowed 109 rushing yards after four games.

Although the Seahawks are only a quarter into the season and numbers can swing wildly, their pace places them among some of the elite rushing defenses in the past 15 years. These are the best, with the Seahawks shown for comparison purposes:

“He’s really special and he continues to break really solid tackles,” Carroll said of Murray this week. “Guys have him and he keeps on moving. He’s got enough speed to run around you and set you down and bust away from you. He runs through tackles, he runs up inside very well, he’s good on the perimeter. He’s got extraordinary running ability.

“We had a really cool week of preparing for (Morris). We’re going to have to do the same thing again.  (Murray) is just really tough to deal with.”

Said defensive coordinator Dan Quinn: “When you see the tackles that he breaks, the explosiveness that he has, that’s why our regard for him is so high. Tackling is going to be a huge part of this game.”

The Seahawks have won 19 of their past 20 home games (including playoffs), outscoring opponents 584-273 (15.6 points per game differential). In those 20, Russell Wilson has thrown 36 touchdown passes and eight interceptions for a passer rating of 109.6.