Thiel: Miles gets it together in Huskies’ triumph

While the defense had its way with Cal, Cyler Miles delivered a much-improved QB effort in a 31-7 triumph. Now he has to do more than repeat it Saturday in Eugene. 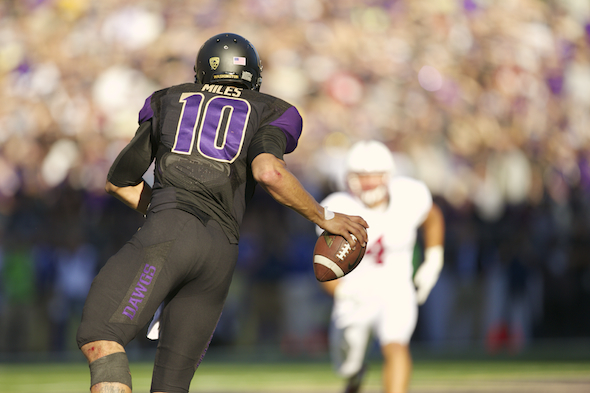 The bet going into Strawberry Canyon Saturday afternoon was for magnum weirdness. But no one figured weirdness to go so . . . weird. The offense that scored 164 points in the past three weeks scored seven, and the offense that couldn’t find the ignition sent sparks everywhere.

At least there was one predictable thing that provided a handrail through the tumultuous Pac-12 Conference football season  – Huskies linebacker Shaq Thompson did something stupendous.

His 10o-yard return of a goal-line fumble by Cal’s budding star QB, Jared Goff, not only opened the scoring, it deflated the Golden Bears so abruptly they never recovered.

After the 31-7 rout by Washington at half-empty Memorial Stadium in Berkeley, an argument could be made that Cal’s 4-1 seasonal start was rich with smoke and mirrors. But a more convincing argument was that halfway through the season, the 5-1 Huskies not only have a win, but a leader and a direction.

Dramatic as was Thompson’s play on Cal’s third possession, the breakthrough of Cyler Miles as a quarterback capable of playing steadily enough to win on the Pac-12 road that was more substantive.

The object of much criticism two weeks earlier in a 20-13 loss to Stanford at Husky Stadium, Miles responded to a slimmed-down playbook by completing 22 of 29 passes for 274 yards, three touchdowns and no turnovers.  Granted, it was against a defense ranked 121st among 125 FBS teams. But two weeks earlier, he faced in the Cardinal what was probably the nation’s best defense.

Last week’s bye apparently was put to good use by Miles and the coaching staff.  Miles stayed in the pocket and patiently waited for the open man instead of running first. His improved efficiency at midseason made a larger point that Miles’ six-month suspension from the program for a campus altercation cost him developmental time that neither he nor the staff wanted to admit.

The renewed confidence was apparent on the Huskies’ first scrimmage play. Petersen ordered up a go route to WR John Ross, who would later blow up the game a couple of times, but on this occasion simply out-ran the throw and had to slow up to help avert an interception.

“We got the look we wanted and we had it,” Miles said, lamenting. “Sometimes I forget how fast he really is.”

Miles made up for the miss on the next possession, which came after the defense recovered the first of three fumbles lost by Goff, who was under big pressure all day from the Huskies’ front seven. Miles hit Josh Perkins, who caught his first pass of the season and only the second by a tight end, for a 25-yard touchdown and 14-0 lead.

Perhaps the signal achievement for the offense in 2014 came in the second quarter. Starting from their own 12, the Huskies rushed 10 times, and Miles completed three of four passes, including the final 11 yards on a TD pass to DiAndre Campbell, to go up 21-0. Those 88 yards over 5½ unspectacular minutes couldn’t be repeated the rest of the game, but its efficiency and balance proved this group could sustain it on the road in the Pac-12.

“I’d like us to be more effective in the run game,” he said. “We’re trying to figure out how to take next step. We’re inching slowly but surely ahead.”

The transition between Petersen and his predecessor, Steve Sarkisian, has been a little lumpy, in no small part because of the drop from three-year starter Keith Price to Miles, who missed all of spring ball. But the Huskies are 5-1 ahead of the game of the year Saturday in Eugene against the Ducks, and seeming to get the hang of Pete-ball.

The Huskies, as many purples are painfully aware, are 0-10 vs. Oregon. In his coaching career at Boise State, Petersen was 2-0. He knows something.

What Petersen would like to know is if his quarterback can know what he knows about moving the ball. Petersen knows Miles is careful — the Huskies have turned the ball over once the season, while the defense has hawked 15 — and he’s about to find out whether he can be dynamic.