The Seahawks did not play well in any facet of the game Sunday in dropping a 30-23 decision to the Dallas Cowboys at CenturyLink Field. 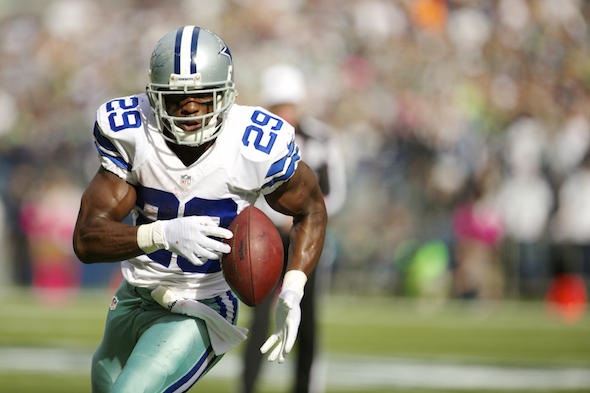 DeMarco Murray of the Cowboys ran for 115 yards and scored the decisive touchdown against the Seahawks Sunday. / Drew Sellers, Sportspress Northwest

Although Dallas dominated statistically and stylistically, Sunday’s game at CenturyLink Field essentially came down to one play, heavily weighted against the visitors: trailing 23-20, the game on the line, the Cowboys faced third and 20 from their 31-yard line with 4:55 to play. The Seahawks needed only a stop. And who converts in that hellish situation against the Legion of Boom?

The Cowboys did, improbably, Tony Romo threading a remarkable sideline pass to Terrence Williams for 23 yards that set up DeMarco Murray’s 15-yard touchdown run with 3:16 remaining. That play enabled Dallas to knock off the Seahawks 30-23 on a day of anguish for the defending Super Bowl champions.

Seattle will not be No. 1 in any NFL power rankings this coming week, or No. 1 in any NFC power rankings, either. Las Vegas will also remove the Seahawks as favorites to repeat their win in the Super Bowl — appropriately so. After a stirring, but flawed, win last Monday night, the Seahawks came out uninspired, requiring two unlikely special teams plays just to stay in the game. Even with those, they did so barely.

It was astonishing — and a testament to their overall skill — that the Seahawks only lost by seven considering that the Cowboys, after falling behind 10-0 early, practically owned the rest of the game.

“It was a really tough,” said head coach Pete Carroll. “They played a really great game. We were not right in any phase today. We didn’t run the ball well, we didn’t throw ball, and they were 10-for-17 on third down. We’re better than that. It was a case them playing well and us not playing well.”

Russell Wilson, with three 100+ passer ratings in his first four starts, finished at 47.6, about as low as a quarterback can go without becoming Charlie Whitehurst. Wilson didn’t throw a touchdown, didn’t come close to throwing one, had a final-play pass intercepted, and nearly had two others picked off. Wilson’s major problem Sunday was that his receivers couldn’t gain separation. Wilson often had time to throw, but had nowhere to go. When he tried to scramble, as he did last Monday night, he also had nowhere to go.

Marshawn Lynch rushed for 61 yards, but 32 came on one carry. Lynch had only two rushes in the first half and 10 for the game, not how Carroll wants to conduct business. Percy Harvin had six touches, but produced  minus-1 yard. The Cowboys expertly diagnosed every screen that Wilson threw in Harvin’s direction, stuffing him for less than nothing.

The Seahawks defense entered Sunday allowing an NFL-best 62.3 rushing yards. Not only had the Seahawks not allowed a 100-yard rusher this season, they hadn’t even allowed a 40-yard rusher. But DeMarco Murray blasted them for 115 and Joseph Randle added 52. Murray tied Jim Brown’s 1958 NFL record with his sixth consecutive 100-yard rushing game to start a season.

The Seahawks looked like they were going to run away with it early, taking a 10-0 lead on a Steven Hauschka 33-yard field goal, set up by Wilson’s 53-yard completion to Jermaine Kearse, and Mike Morgan’s 18-yard return of a Doug Baldwin blocked punt.

But the advantage proved to be a mirage. Dallas pulled within 10-7 when, following a 38-yard run by Randle, Tony Romo threw a two-yard TD pass to Gavin Escobar. Byron Maxwell narrowly missed an interception at the goal line which, had he made it, would have provided him clear sailing for a touchdown.

Dallas tied it 10-10 and took a 17-10 lead at intermission. In the third quarter, after Morgan recovered a muffed Dallas punt, Wilson ran nine yards for a touchdown that tied the game at 17. The Seahawks moved out to a 20-17 lead on another 33-yard field goal by Hauschka, quickly answered by Dan Bailey’s 56-yarder with 2:16 to play in the third.

The Seahawks went ahead 23-20 with 8:16 left (Hauschka again) and had a chance to put it away when Dallas faced that third and 20 with 4:55 left. But Romo’s pass to Williams was perfect. Carroll challenged the call, but the ruling stood. That play deflated the Seahawks. Murray knocked off runs of 25 and six yards before bolting into the end zone from 15 for what proved to be the game-winning score.

“Murray was terrific,” said Carroll. “They played the game they wanted to play it and we couldn’t do anything about it. Our blocking and tackling was not as good as it needed to be. Going forward, we’ve got to get better.

“We came back from the Monday night game and didn’t do very well. We had no rhythm, we couldn’t get going and it gets amplified when (defensively) you can’t get off the field. I didn’t do a good enough job to get us ready to do this.”

The Seahawks, who fell to 3-2 and lost for just the second time in 21 home games, face consecutive road games at St. Louis and Carolina, and have some injury issues confronting them. Maxwell left the game with a high ankle sprain and linebacker Bobby Wagner jammed a big toe, although he returned.

Morgan’s blocked punt return for a touchdown was the first for Seattle since Jeron Johnson returned one three yards against the Cowboys Sept. 16, 2012 . . . Wilson went 4-for-14 (28.6 percent) in the fourth quarter, the second-worst fourth-quarter completion percentage in his career. Wilson went 1-for-5 in last season’s loss to the Colts. The Seahawks had no rushing first downs in the first half and did not make a first down in the second quarter.

The Seahawks travel to St. Louis at 10 a.m. Sunday for their first meeting with the Rams (FOX).