Seahawks’ failure to find a way to better use RB Marshawn Lynch just one of several failings that opened the way for the Cowboys to stun Seattle at the Clink. 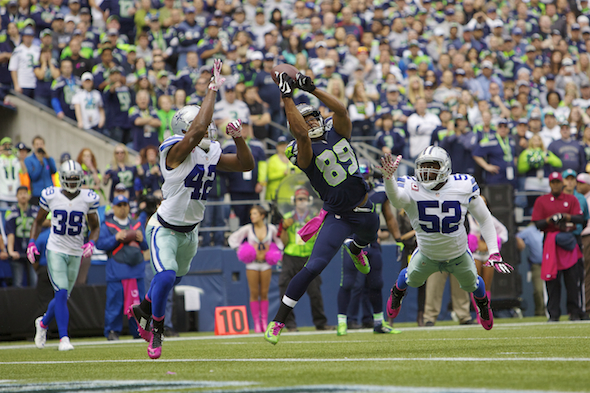 Doug Baldwin had this red-zone pass only for a moment, then Cowboys SS Barry Church knocked it away. / Drew Sellers, Sportspress Northwest

In the bewilderment-free part of the Seahawks locker room, FS Earl Thomas batted away a question better than the Cowboys knocked away passes from Seahawks QB Russell Wilson.

“I’m not frustrated,” Thomas said. “we got beat, straight up.” No truer words were spoken Sunday afternoon.

There was no 120-degree heat to blame, no hostile crowd, no surprising play calls, no referee conspiracy. The Cowboys had a great running game. They had a defense that can watch game film of an opponent. And they had a veteran quarterback in Tony Romo, who had a better day than Seahawks QB Russell Wilson.

The Cowboys owned the line of scrimmage on both sides. The 30-23 outcome followed. The Seahawks have been found out.

No, they aren’t terrible. But at the moment, they are a little more than pedestrian. And Sunday caught a team on the way up. The Cowboys are a for-real 5-1.

At least on offense, there are a few reasons: They missed injured TE Zach Miller and C Max Unger, and at left tackle they are playing with a sub-par Russell Okung, the most penalized player in the NFL entering Sunday, who added two more false starts.

And they are operating under the belief that RB Marshawn Lynch can be deployed only under certain circumstances. He had two carries for eight yards in the first half, and finished with 10 and 61.

“It’s because you have to get first downs and get more plays,” coach Pete Carroll said, repeating a refrain after previous weak efforts on offense. “The story is going to write itself every time that way. We just couldn’t get in sync and get the rhythm and connect it with third-down conversions.”

A better defense for Carroll would be success with other tactics. But the heralded jet sweep with the fleet Percy Harvin that scared so many is now defensible by smart teams. Harvin ran three times for minus-one yard, and had three receptions for zero yards. The Seahawks had only 48 offensive snaps, so about 15 percent were wasted on plays Dallas knew were coming.

A prime example of the failed Lynch deployment was the opening possession, overshadowed by the fourth-quarter drama, which ended in a field goal instead of a touchdown.

After Lynch went for five yards on the first play, the Seahawks passed on the next eight plays. From first down at the Cowboys 14, Wilson threw to Harvin for minus-1, to Harvin again for no gain, and an incompletion to WR Doug Baldwin.

The field goal seemed OK at the time, especially when the lead expanded to 10-0 after Baldwin blocked a punt that was returned for a touchdown. But had they pounded Dallas with Lynch and scored a TD, the 14-0 lead changes strategy for both teams.

In a 0-0 game, there was plenty of time with the ball. Baldwin was blunt about it.

“We have to be real about it, actually pay attention to things and not blow smoke up our asses that everything will be all right.”

TV cameras caught Baldwin arguing along the sidelines with Wilson.

“I’m not mad at Russ at all,” he said. “It’s a collaborative thing. We all have to pitch in and do our part.”

Also needing to pitch in was the defense. The Seahawks lost CB Byron Maxwell mid-game to an ankle sprain, and MLB Bobby Wagner returned to the game with a sore toe that limited him, as did a hip injury to SS Kam Chancellor. The threadbare secondary had to use CB Steve Terrell, who just showed up Saturday.

But the injuries were little explanation for the front seven’s inability to maintain gap control for the cutback runs of RB DeMarco Murray, who had 110 yards doing exactly as he had for his previous five games of 100+ yards to begin this season.

“We just didn’t tackle well today,” said DE Michael Bennett. “They’re a gap-running team, not a blow-you-off-the-ball type of offense. We just didn’t get there.”

Players who did get to their assigned spots were the Dallas defenders against Seahawks receivers. They swatted away nine potential receptions, accounting for much of Wilson’s 14 of 28 passing day for 126 yards. Then again, Wilson had nowhere near the aim of his previous games this season, when he put balls where only his receivers could get access.

“I didn’t play my best game,” said Wilson. “For whatever reason, we were just off by a little bit. I’ll take the blame for it; I could have played a lot better.

“Not everything is terrible. We’re still a great football team.”

Well, he’s half-right. The claim of greatness seems a little thin. It doesn’t mean it won’t happen this season. But it’s plain that the Cowboys replicated the Chargers formula of short passing routes and screens to get the ball past the rush and in front of the secondary. And the Cowboys defense emulated the Chargers by making sure a linebacker checked in on Wilson’s read-option keeper to force him to the middle of the defense.

The Seahawks managed only one offensive touchdown, and that came in the third quarter after the Cowboys muffed a punt and LB Mike Morgan recovered at Dallas 14. After a pass to Harvin for five yards, Wilson faked the read option to Lynch, who collapsed the defense, and Wilson swung wide and left, going in untouched.

Lynch made the play work. As he has most of the time during his Seahawks tenure. Carroll and coordinator Darrell Bevell know that. But sometimes even coaches need habits and tendencies broken. Three-and-two for for the defending Super Bowl champs figures to do that.