If NFL history is any indication, Seattle’s game against the St. Louis Rams next Sunday looms large in their pursuit of a home field advantage in the playoffs. 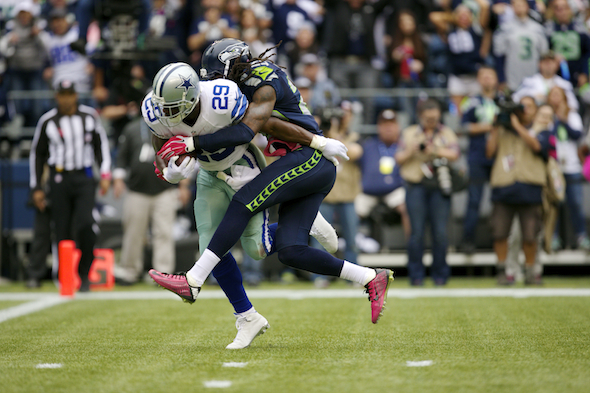 DeMarco Murray ran all over the Seahawks Sunday in a 30-23 victory that dropped Seattle to 3-2. / Drew Sellers, Sportspress Northwest

Brian Billick, the former head coach of the Baltimore Ravens and now an opiner for the NFL Network, made this point repeatedly Sunday morning: “After five weeks, you know what kind of team you are. Now you have to deal with it.” If Billick is correct, the Seahawks have officially relinquished their status as the NFL’s best team and rank among the unwashed fighting for a playoff spot. Now they’ll have to deal with that.

Numerous circumstances contributed to their 30-23 loss to the Dallas Cowboys Sunday, including the absence of center Max Unger and in-game injuries sustained by CB Byron Maxwell and LB Bobby Wagner that significantly thinned the defense.

But those setbacks, as well as the continuing absence of DBs Jeremy Lane and Tharold Simon, doesn’t negate the fact that the Seahawks were simply flogged by a better team, providing in the process a textbook example of why Super Bowl repeats are so rare.

The Seahawks did not accomplish much beyond a couple of special teams plays that kept them in the game. In conjunction with DeMarco Murray tying a 56-year-old rushing record held by Jim Brown, the Cowboys seemed to understand Seattle’s game plan better than Seattle did, particularly when Russell Wilson tried to throw screen passes, especially to Percy Harvin.

As a result, Dallas owned the line of scrimmage on both sides (see Thiel: Baldwin Says Seahawks Need To Be Real), thoroughly exposing the Seahawks, at least for one game.

So instead of improving to 4-1, as oddsmakers thought they would, and writing off the San Diego loss in Week 2 to the heat, the Seahawks fell to 3-2 with road games at St. Louis and Carolina.

While 3-2 hardly seems like a hole, it leaves scant margin for error in the ultra-competitive NFL. It means that the Seahawks will practically have to run the table in order to gain home field throughout the playoffs – if there are any.

The importance of avoiding a 3-3 start, which the Seahawks will attempt to do Sunday at the Edward Jones Dome in St. Louis, is this: In the Super Bowl era, only six teams started 3-3 and reached the Super Bowl, with the following results:

The 2005 Seahawks also started 3-2 and wound up securing home field throughout the playoffs en route to Super Bowl XL. But those Seahawks needed a franchise-record 11-game winning streak to do it (Seattle’s longest winning streak last year was seven).

While only six teams started 3-3 and reached the Super Bowl, 21 started 4-2 and got there with nine of the 21 winning it. So if the Seahawks fail to beat the Rams, 3-3 will practically become an abyss.

Harvin had an astonishing game Sunday for all the wrong reasons. He finished with a -1 in rushing yard on a sweep play that has worked once this season (53 yards at San Diego).

Targeted four times, Harvin caught three passes and didn’t turn any of the catches into so much as a yard. He is the first receiver in franchise history with at least three catches and no yards, breaking the mark of three catches and two yards by Sam McCullum against Kansas City Sept. 30, 1979.

Several running backs have turned three catches into minus yards, notably Chris Warren at Washington Nov. 19, 1995, when he finished with a -24. But Harvin is the first receiver to lay a goose egg.