Hoping to develop more homegrown players and improve their MLS product, the Sounders are bringing an expansion team to the USL Pro League in 2015. 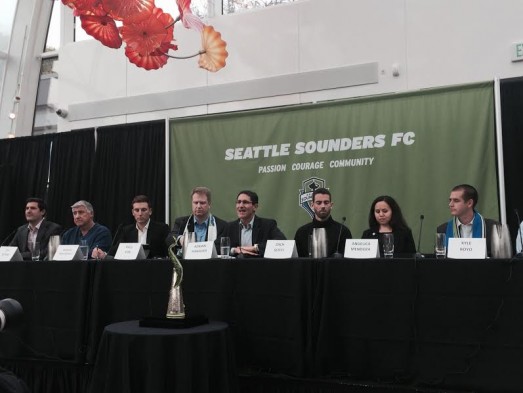 Looking to boost player development, Seattle Sounders FC will launch a USL Pro team in 2015 — Sounders FC 2 — general manager Adrian Hanauer said Tuesday at a gathering at the posh Chihuly Garden and Glass center at Seattle Center. In an unorthodox move, a fan-led, non-profit organization will hold a 20 percent ownership stake in the club.

“The intention is for them to have a real say, a 20 percent say,” Hanauer said. “I think we’ve always been pretty good at making sure that if a big chunk of our fan base believes something, then we ought to pay attention.”

As with its MLS affiliate, Sounders 2 will train at Starfire Sports complex in Tukwila, 20 minutes south of Seattle. The hope, Hanauer said, is that having a minor league club in USL Pro will better prepare “homegrown” players trained in the Sounders Academy for a potential career in MLS, while providing a competitive environment for Sounders rehabbing injuries.

“This was missing from our arsenal.”

S2’s introduction comes at a time when MLS is increasing its influence in USL Pro. As in Europe and other leagues overseas, more MLS teams are having reserve franchises play in lower-tier pro leagues to develop better players.

The Portland Timbers announced Tuesday the formation of their own second team, Timbers 2. They begin play in USL Pro next season. Meanwhile, the Los Angeles Galaxy in 2014 became the first MLS franchise to own a secondary team in USL Pro, with Galaxy 2.

The need for any MLS club to have a professional minor league franchise is obvious.

Hanauer declined to offer specifics when asked the cost of launching S2, saying that it will take “millions and millions of dollars” to grow the organization.

“It certainly never felt like a defensive or reactive move, because we knew that we were going to do this probably a year ago, maybe longer,” Hanauer said. “We always knew this was the right decision.”

Andrew Opatkiewicz, who most recently worked at the marketing firm Intersport, will serve as Sounders 2’s general manager.  In a press release issued by the club, he expressed optimism the team can help grow the sport throughout the region.

“Over time I think this move will prove very important to the development of world-class first team players from the Puget Sound,” he said.

That’s welcome news for a player like Sounders defender Zach Scott, who spent seven years with the USL-1 Sounders from 2002 to 2008 while trying to make his way to MLS. Attending the announcement ceremony, Scott was named the first member of the Sounders Community Trust.

Said Scott: “I needed the seven years I had in the USL to get anywhere close to be able to play in the MLS.”