Jarryd Hayne, Australia’s best rugby player, has retired at 26 and wants to become an NFL player. He’s been to Seahawks headquarters. Crikey. 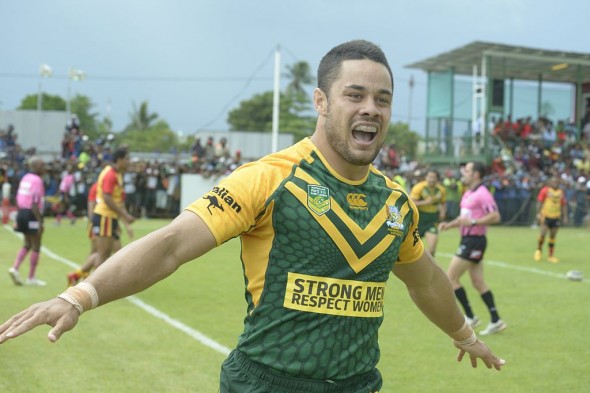 Aussie Jarryd Hayne, 26, plans to chase his dream in the NFL. / Wiki Commons

MELBOURNE — Jarryd Hayne is arguably the best player in Australia’s National Rugby League. He was a co-winner of the prestigious Dally M medal awarded to NRL’s player of the year.  At 6-foot-2 and 220 pounds, the 26-year-old cuts and moves like an NFL running back or wide receiver, which is just what he wants to be.

In an extraordinary media conference in Sydney Wednesday, Hayne stunned the rugby league world by announcing he was retiring and leaving his team, the Parramatta Eels, to take a shot at playing in the NFL.

Hayne has not signed with any American team and told the media that he plans to go to Los Angeles to train. But on a recent trip to the U.S., he visited the Seahawks headquarters in Renton.

He also seemed to have a soft spot for Husky football, if you check his Instagram account.

Overwhelmed the amount of support I’ve received. Can not begin to thank every1 for the messages of support both personal n on social media.

Seahawks coach Pete Carroll said he didn’t meet Hayne and was cautious about talking about him because he wasn’t clear about his contract status with his Aussie team.

“It’s a pretty exciting thought,” he said. “He’s an incredible athlete. They have a lot of great players and it’s a great game — they run fast and play hard.

“The transition would be really hard. There’s only a certain few who can (make the NFL without previous football experience).”

If successful, Hayne’s move would not be unprecedented. A number of Australians – Ben Graham, Sav Rocca, Darren Bennett – have made the transition from Australian Rules Football, but they, along with Brad Wing, who starred at LSU and is a Pittsburgh Steeler, are punters.

Only two Australians have played in the NFL as non-punters, assuming you don’t include Seahawks lineman Jesse Williams, who starred at Alabama but is on injured reserve for the second season in a row.

Colin Scotts a defensive lineman who played at Hawai’i, was drafted in the third round by the St. Louis Cardinals in 1987 and played in seven games, while Hayden Smith, now back playing professional rugby in England, made five appearances for the New York Jets in 2012.

The big question (other than how will Parramatta cope with the loss of its best player) is whether Hayne can fulfill his dream. There’s no doubt he’s a superb talent, but the question is whether he can adapt to a game with which he is familiar only through television and Madden video games.

Detroit Lions running back Reggie Bush was in Australia recently on a promotional tour.  After watching video of Hayne, he said, “It looks like he could come play with us tomorrow.”

Of course there are plenty of people in the world who look like they can play in the NFL.

Hayne himself sounds realistic. He told the media that this is a long-term plan and that “I’m under no illusion. It’s going to be tough. I’m risking a lot, putting a lot on the line. But if there’s no risk, there’s no reward.”

He called it “a huge challenge” and admitted that he’s been thinking about the move for awhile.