QB Russell WIlson says the Seahawks are fine. They’ll find out Sunday against a Rams defense that gave them fits last season. 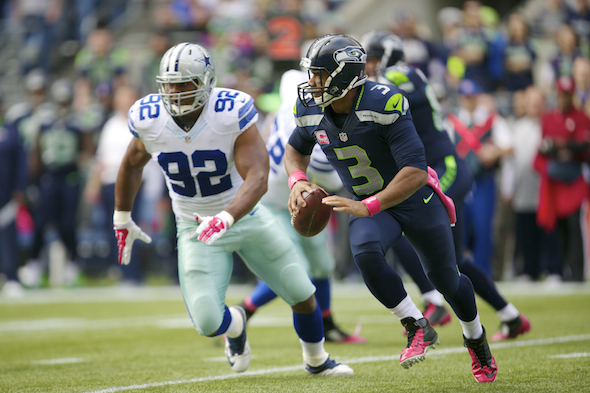 Execution from key playmakers and playcalling of offensive coordinator Darrell Bevell has come under scrutiny after Seattle managed one offensive touchdown last week in a 30-23 home loss to the Cowboys. The defeat dropped the defending Super Bowl champions to 3-2 and third place in the stacked NFC West entering Week 7.

During his weekly meet with the media, Bevell admitted the offense, ranked 12th with 26.6 points per game, must execute better in all phases, then added it’s been “tough” to get enough touches for both WR Percy Harvin and RB Marshawn Lynch — especially when the offense can’t sustain drives.

Consider the Dallas loss. Harvin managed -1 net yard on on three runs and three receptions. Lynch had 10 carries for 61 yards.  The Seahawks went 5-of-13 on third downs and ran 48 plays.

“I do have to do a better job of getting him the ball.”

“We’re always trying to find the best ways to utilize guys,” Wilson said. “Percy Harvin is so electric and makes so many different plays for us. We haven’t really hit our groove quite yet. We have in a few games, and a couple games we haven’t.”

If last season is an indicator, their matchup Sunday against the St. Louis Rams (1-4) at the Edward Jones Dome doesn’t necessarily provide a template for the Seahawks offense to find their rhythm.

Yes, Seattle went 2-0 against St. Louis in 2013. But both victories were uglier than catfish. In the first meeting, Seattle managed 135 yards in a 14-9 road win over the Rams, then upped the total to 269 in a 27-9 win in the final game of the regular season. That clinched the NFC West title, a first-round bye and home-field advantage through the playoffs.

“You look at their defense, they’ve got first-round picks everywhere pretty much,” Wilson said. “They make a lot of plays and obviously (DE) Robert Quinn is a guy that I believe led the league in sacks last year.  They haven’t gotten as many sacks as last year but they’re right near the quarterback every time.”

A pass rush that’s missing DE Chris Long, out with an ankle injury, has had only a single sack this season. But perhaps the Rams have been saving them for Wilson, who went 14 of 28 for 126 yards, no passing touchdowns and an interception in a Sunday loss to Dallas — a week after being named NFC offensive player of the week.

But St. Louis is having its problems on defense. The Rams rank 30th with 30 points allowed per game.

“We’re fine. We just had one bad game. Everybody was talking about us as the best team in football before (last week),” he said. “We just had a bad game. It’s going to happen every once in a while. Hopefully never again.”

Wagner out, Wright moves over

MLB Bobby Wagner (turf toe), who leads the Seahawks with 50 tackles, is out for the Rams game and probably longer, coach Pete Carroll said earlier this week. Wagner’s right foot was in a cast Thursday. To get around the locker room, he pushed a scooter.  OLB K.J. Wright will move to Wagner’s middle linebacker spot, while Super Bowl MVP Malcolm Smith, the team’s fourth linebacker, will start at outside linebacker opposite Bruce Irvin.