In the Rams, Wilson faces his worst nemesis

No team has pummeled Russell Wilson more than the St. Louis Rams, who have sacked him a staggering 19 times in four games. Seattle and the Rams meet Sunday. 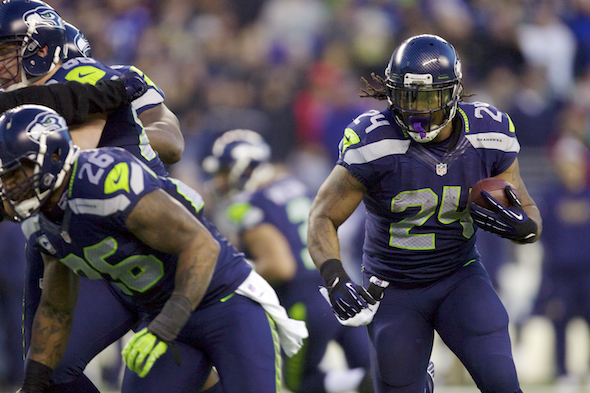 The Oct. 28, 2013 meeting between the Seahawks and St. Louis Rams at the Edward Jones Dome included three memorable plays, the first an 80-yard touchdown pass from Russell Wilson to Golden Tate in the fourth quarter. Tate made an acrobatic catch over Janoris Jenkins and, foolishly, waved a mocking finger at safety Rodney McCloud as he ran to the end zone, earning an unsportsmanlike conduct penalty. Tate later apologized.

The second occurred with four seconds left when the Seahawks, backed up to their one-yard line, stuffed Daryl Richardson for no gain on third down. On fourth down, the Seahawks forced quarterback Kellen Clemens to overthrow his intended target in the corner of the end zone as the clock ran out, preserving a 14-9 victory.

While the Seahawks narrowly escaped, they did so while absorbing a brutal beating from the Rams’ defense. Robert Quinn sacked Russell Wilson three times, all in the first half. Chris Long also had three takedowns. Rag-dolled all day, Wilson, pressured on 12 of 25 dropbacks, went down a career-high seven times, was hit 10 more (eight by Quinn and Long), and the Seahawks suffered 10 tackles for loss.

The Seahawks gained only 135 yards – 55 if the Tate 80-yarder is deducted. They became the first team to win a game with 135 or fewer total yards since the Dolphins against the Jets in Week 14 of 2010. Their seven first downs were the fewest in franchise history.

Seattle also had a minus-1 yard offense in the first quarter and 38 for the half, its fewest since gaining 37 in the first half against Kansas City in 1998.

Not only did the Rams turn Wilson to pulp, they held Marshawn Lynch to 23 rushing yards, his fewest since Week 2 of 2011 against Pittsburgh.

“We were very fortunate,” Pete Carroll said postgame. “We just couldn’t get the offense going. Fortunately, the defense hung together and gave us a chance to win.”

The Seahawks fared better in a late December rematch, winning 27-9 in a game notable for  12 penalties called on the Rams, including four personal fouls in the span of two plays late in the third quarter. Wilson didn’t suffer quite the pummeling he did in the first game, but was still sacked four times and hit eight more. His two-game, 2013 total vs. St. Louis: sacked 11 times, hit 18.

In the four career games in which Wilson has faced St. Louis, the Rams have sacked him an astonishing 19 times and hit him 29. No NFC West foe has administered as many bruises to the Seattle quarterback than the Rams, as the following shows (TFL=tackled for loss):

More than any other opponent, in the division or out, Wilson has had tremendous difficulty with the Rams, something to keep in mind as the Seahawks gear up for their first meeting of the season with St. Louis Sunday under the Arch. Quinn, the St. Louis DE who led the NFL last year with 19 sacks, explained it this week.

“He’s a shorter quarterback, and I’m not trying to take anything away from him,” said Quinn. “He definitely makes plays when asked, but if you keep him in the pocket, offensive linemen are 6-foot-4, 6-5, 6-6 and you push them back into his face, it makes it harder for him to see his receivers. So I think the best thing is to try and keep him inside the pocket and go from there.

“Russell can get out and make a play down field or dump it off to a receiver and make him make a play. It can be a little frustrating, but at the same time, you collapse the pocket and sometimes for whatever reason, you can fall into a couple sacks. If that happens, the ball gets rolling — a sack here, a sack there and now they’re kind of back to back.”

It will not help Wilson Sunday that C Max Unger and TE Zach Miller won’t play due to injuries. He needs all the blocking he can get, especially against the Rams, his chief tormentor.

“They’re a really aggressive team,” said Pete Carroll. “Jeff (Fisher) has always coached a really physical team and an aggressive style of play. They’ve always been tough on us when we go there, and here too. We‘re expecting the same. They’re the youngest team in the league, loaded with a bunch of guys that can fly in a lot of positions.”

The Rams are 1-4, rank 24th in offense and 30th in defense. Their scoring differential of -49 points ranks 28th, helping explain why the Seahawks are a 6½-point road favorite despite losing as a favorite at home last week against Dallas. Despite St. Louis’s record, the Seahawks will need a huge uptick in performance over a week ago to escape the Edward Jones Dome with another win.

Carroll and offensive coordinator Darrell Bevell stressed this week the importance of the Seahawks converting third downs after they went 5-for-13 against the Cowboys. That largely eliminated Lynch, who had 10 total carries, from the game.

“On offense, if you don’t have all 11 guys working as one, and everybody doing the right thing and the right time, you can have some negative plays and you can have plays that don’t go anywhere, and that starts to set you back,” said Bevell. ”Then, on third down we didn’t convert on those and that was kind of the story.”

The Seahawks are converting 38.1 percent of their third downs, ranked 23rd – bad, but not as bad as it seems. Last year, they converted 37.3 percent.

Another story was that the Seahawks had nine more penalties against Dallas, including five pre-snap flags (three on offense, two on defense). Either undisciplined or overanxious, the Seahawks lead the NFL with 21 such penalties (Jets 20). Russell Okung ranks second in the league with seven penalties, including four pre-snap. Okung had only eight penalties all of last season.