Unable to get the production they wanted out of him, the Seahawks traded Percy Harvin to the New York Jets Friday for a conditional draft choice. 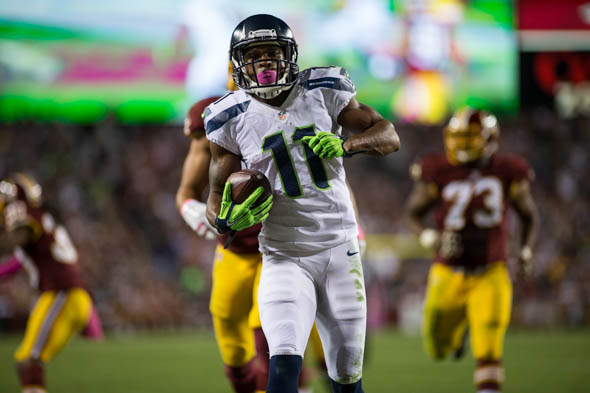 Although the Seahawks have yet to confirm it, they have traded wide receiver/kick returner Percy Harvin to the New York Jets in exchange for a conditional — some reports say mid-round — draft choice. Stunning on the surface, the trade was first reported by Fox’s Jay Glazer, and occurred Friday as the Seahawks were wrapping up preparations to depart for St. Louis, where they will meet the Rams Sunday.

The Seahawks acquired Harvin in March 2013 from Minnesota for a 2013 first-round draft choice, one of three 2013 seventh-round draft picks and a 2014 third-round choice. After Harvin arrived, he signed a six-year, $67 million extension, $25 million guaranteed, that, coupled with his lack of production beyond a series of spectacular plays, probably played a role in his trade to the Jets.

Also significant: Harvin is a world-class athlete who has been traded twice by age 26, a red flag if ever there was one.

In five games this season, Harvin had a team-high 22 receptions, but ranked third in yards with 133 behind Doug Baldwin (187) and Jermaine Kearse (168). But the Seahawks were unable to effectively work Harvin into the offense, especially as a deep threat.

Harvin did not score a touchdown this season and had only one long play, a 51-yard run against San Diego.

The Seahawks finally found a way to get Harvin fully engaged in their game at Washington Oct. 6. Harvin scored on a 16-yard run, a 26-yard catch and a 41-yard catch, but all were called back due to penalties (including a motion call on him), making Harvin the first player in franchise history to have three scores called back in the same game.

Last week against Dallas, Harvin caught three passes for no yards and caught one pass for minus one yard. With the game in the balance, Harvin was not on the field for 11 of Seattle’s final 17 offensive snaps.

In six regular-season games, Harvin caught 23 passes for 150 yards and no touchdowns, with a long gain of 33. He rushed for 92 yards and one touchdown. In Seattle’s 43-8 win over Denver in the Super Bowl, Harvin had two rushes for 45 yards and returned a kickoff 87 yards for a touchdown.

Harvin, making a base salary of of $7,117,648 this season, would have cost the Seahawks $10.5 million in 2015, also the amount of his cap hit. The Seahawks are facing an off-season extension for QB Russell Wilson, who will cost them north of $20 million.