Warren Moon said Percy Harvin was “a different guy . . . emotional, sensitve,” whose presence from the start was resented by the Seahawks receivers. 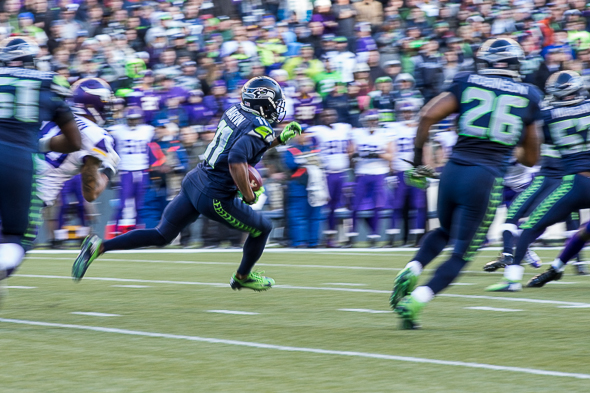 Ever the blur, Percy Harvin, here on his first play as a Seahawk, a 58-yard kickoff return vs. Minnesota, his old team, had himself run out of town. / Drew McKenzie, Sportspress Northwest

When an NFL team passes as little as the Seahawks — they were next to last in attempts (420) in a season when they won a Super Bowl — each pass play is a little more meaningful for each receiver. So when coach Pete Carroll spent three draft choices and millions of dollars to bring in WR Percy Harvin, he invited trouble with the remaining receivers.

When Harvin missed nearly all of 2013 with a hip problem that was not previously diagnosed prior to his acquisition, then returned in time to shine in the playoffs and Super Bowl, antagonism grew.

“The receivers were not really happy about (Harvin’s arrival),” Warren Moon, the Hall of Fame quarterback who is the team’s radio analyst, told AM 1090 The Fan Friday afternoon (complete interview here). “For as much respect as you have for the player’s ability, from a selfish standpoint, you know you’re not going to get as many touches. Right there it can be a problem.”

Described by Moon as “a different guy, a very emotional and sensitive guy off the field,” Harvin was reported during Super Bowl week to have had a fight with WR Golden Tate, who subsequently left for Detroit in free agency, that left a black eye. In late August, Harvin was said have had another altercation, this one with Doug Baldwin, that left a cut on his chin.

While not addressing specifics, Moon said Harvin was disruptive to team chemistry so valued by Carroll.

“Chemistry is very important for any team, on and off the field,” he said. “It’s important to Pete as much as any coach in the league. One of the reasons why this team has been so good over the last three-four years is they’ve had great chemistry.

“In some ways, Percy disrupted that chemistry, in different ways on and off the field.”

After an upset loss to Dallas Sunday at home, Baldwin went off in the locker room with a profanity-speckled rant about the offense’s shortcomings. He didn’t mention any player specifically, but Harvin had six touches for a net of minus-1 yard.

“The whole offense needs to refocus,’’ Baldwin said. “We didn’t correct the things that we needed to correct from last week.

“We need to be honest with ourselves and hold each other accountable and be real. The BS that we had last week (in a win over Washington) about how great our offense played, that’s BS. In all honesty, that’s BS because we played like (expletive) last week. We didn’t correct those things, and it caught up to us.”

Booting Harvin to the New York Jets for nothing that will help in 2014 is about as real as it gets. While not addressing Baldwin’s comments specifically, Moon said that integrating Harvin’s rare skill set was not working. Perhaps the final straw came Sunday, when Harvin reportedly refused to return to the field late in the game. He was not on the field for 11 of Seattle’s final 17 snaps, and reserve WR Bryan Walters saw playing time unusual for him.

“On the field, we’ve seen how they’ve tried to incorporate his talents into what they do,” Moon said. “At times it’s worked, and at times it hasn’t worked. There’s not been a good, consistent basis there.

“Instead of upsetting the apple cart, and trying to force things, (the Seahawks said) let’s cut ties now and create that good chemistry we had before.”

Quarterback Russell Wilson had 126 yards passing against Dallas, his lowest total since the last home loss at the Clink, a 17-10 defeat in December to Arizona, in which he had 108. Wilson admitted afterward his throws were a bit off, and Baldwin was seen by TV cameras yelling at Wilson. But Baldwin later denied it was the QB’s fault.

“It’s not on Russ,’’ Baldwin said. “I’m just saying, in general, our offense, we’re just too f——-  good not to be moving the ball down the field. It’s a collaborative thing. We’ve all got to pitch in and do our part. We’ve all got to do better.”

Presuming that Baldwin and the others got their wish with Harvin’s departure, it is indeed on them to do better, starting Sunday in St. Louis against the Rams.

The clubs finally announced the deal’s completion Saturday morning after Harvin arrived and passed his physical (imagine the debacle if Harvin didn’t pass, and had to return to Seattle).

“Percy is a versatile, dynamic player who has been productive on offense and special teams,” said Jets general manager John Idzik, a former Seahawks executive from 2007-12, said in a statement. “We’re excited about adding him to the Jets.”

The Seahawks finally issued a statement from GM John Schneider:

“Although this was an extremely difficult decision, we are constantly evaluating our team and believe at this time, that this is in our best interest to move the team forward. We thank Percy for his efforts that contributed to a Super Bowl XLVIII victory and wish him well.”

Minus Tate, their their leading pass catcher from a year ago (64 catches), and Harvin, the leading catcher this season (22), the Seahawks will make it up the rest of the way on the fly in a season that suddenly became even more dramatic.