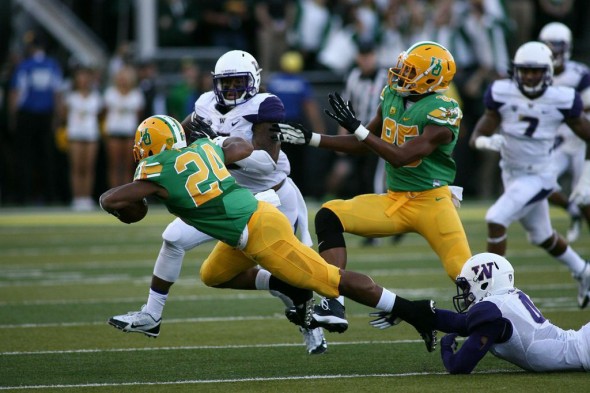 Oregon RB Thomas Tyner contributes some of the 218 yards rushing against the Huskies Saturday in Eugene. / Gary Breedlove, Sportspress Northwest

Oregon (6-1, 3-1) made another emphatic case that Huskies vs. Ducks is no longer a rivalry by bludgeoning Washington (5-2, 1-2) 45-20 Saturday night at Autzen Stadium. In administering their annual beatdown, the No. 9-ranked Ducks rolled to a 28-6 halftime lead behind true freshman Royce Freeman and easily recorded their 11th consecutive victory in the series, just as oddsmakers forecast.

A true freshman, Freeman romped for 169 yards on 29 carries and scored four touchdowns on runs of 37, 3, 1 and 3 yards against a Washington defense that thought it had made enough strides to somewhat contain the Ducks. But Royce and Heisman Trophy candidate QB Marcus Mariota more than quashed that notion. After a decade, Washington still hasn’t made up much ground on Oregon.

After Oregon went 3-and-out on its first two series and ceded a field goal to the Huskies, the Ducks made Saturday night’s game a virtual re-run of the previous 10 editions, dominating Washington on both sides. The Ducks led 35-6 late in the third quarter before the Huskies tallied two late touchdowns.

But the game was over by intermission when Oregon, with Freeman scoring three times, put it away with two second-quarter drives that underscored the disparity between the programs.

By the time intermission arrived, the Ducks had 380 yards to Washington’s 125, had held the Huskies to 27 yards rushing, and converted 7 of 11 third downs and both of their fourth-down plays.

After Washington went 3-and-out to start the second half, Oregon promptly scored again, Mariota throwing a 16-yard touchdown pass to Dwayne Stanford to make it 35-6. The rest of the game was a formality.

Mariota, who exited with nine minutes left, completed 24 of 33 for 336 yards, two touchdowns and no interceptions. Freeman scored a fifth touchdown, but it was called back due to a holding call.

Washington stopped the Ducks on their first drive, but didn’t make another stop until late in the third quarter. With Mariota as efficient as ever, Oregon amassed 554 yards to Washington’s 317, converted 11 of 18 third downs, three of four fourth downs, and held the Huskies to 133 rushing yards. Washington entered averaging 192.

Washington’s best sequence occurred late in the third quarter when quarterback Cyler Miles orchestrated a 12-play, 79-yard drive that concluded with a three-yard touchdown pass to Deontae Cooper. The Huskies twice converted on third down and received a 33-yard run from wide receiver John Ross on a reverse.

Miles completed 19 of 28 for 147 yards, but he also threw his first interception of the season just before halftime in what turned out to be key play.

With the Huskies in position to bite into Oregon’s 21-6 lead, Miles was picked off — his first interception of the season. Two plays later, Mariota tossed a 23-yard TD to Byron Marshall.

Miles departed the game with 10 minutes remaining to undergo a concussion protocol, and was replaced by freshman Troy Williams, who completed five of his 10 passes for 37 yards. Williams also ran five times for 28 yards and scored Washington’s final touchdown on a seven-yard run.

NEXT: The Huskies return to Seattle Saturday to face Arizona State at 7:45 p.m. (ESPN).