The outcome was the same, only the names of some of the purple victims changed. Petersen’s success at Boise State against Oregon was not apparent Saturday in Eugene. 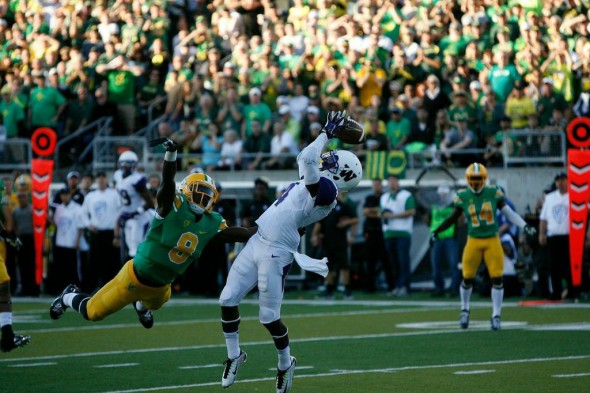 When Chris Petersen was pursuing the Washington coaching vacancy, his 2-0 mark at Boise State over Oregon glittered like a diamond on his resume. He got the job. Unfortunately for him, he discovered Saturday night in Eugene’s Autzen Stadium, Washington is no Boise State.

Despite his career accomplishments, Petersen experienced nothing different against Oregon than did his UW predecessors Steve Sarkisian, Tyrone Willingham and Keith Gilbertson. The Ducks were men, the Huskies were boys.

The 11th consecutive victory in the series was decided by the second quarter, but NCAA rules required completion of all four. After the tedious 45-20 outcome, Petersen was a master of only one thing — the obvious.

“They are flat-out better than us,” he said. “It was painful.”

After the Huskies forced a three-and-out on Oregon’s first possession and forged a 3-0 lead, the balsa-wood house fell in. The first of four touchdowns by freshman Royce Freeman was a thunderstrike of such simplicity that whatever myths harbored by the UW defense that it was competitive with Oregon were smashed.

On a third-and-eight at the Washington 37, Freeman, the latest in a long line of productive Oregon backs, ran a simple blast play straight up the middle and went untouched into the end zone. With potentially four NFL draftees on the Huskies defense, to not even touch Freeman was mortifying.

Even when the Huskies tackled, it did them no good. The Ducks’ next touchdown came from the UW 3 yard line when potential NFL No. 1 draftee QB Marcus Mariota was tackled running left on the option behind the line of scrimmage, yet somehow managed to flip the ball to Freeman, who went in again unmolested.

It was one of several head-shaking plays among the 49 Oregon ran off in the first half on the way to a 28-6 halftime lead.

“We didn’t come up big enough on defense to stop them,” Petersen said. “Someone’s got to swell up and get something done.”

If it wasn’t happening with the defense, it certainly wasn’t going to happen on offense, the least productive in the Pac-12 at 372 yards a game. The Huskies finished with 317 yards, but most of that came in the fourth quarter when reserves got some exercise with the outcome in hand.

In addition to two turnovers, including the first interception thrown by QB Cyler Miles this season, Huskies receivers had at least four drops, including one by receptions leader Jaydon Mickens at the goal line that forced UW to settle for a field goal.

“You have to make those plays against a team like this,” Petersen said. “It can get out of control quickly. (During the season) we had been capitalizing with turnovers. It’s hard enough to beat these guys playing a good game.”

The biggest failure was in the rushing game. Leading rusher Lavon Coleman managed 28 yards in 12 carries and developed a shoulder injury. Primary backup Dwayne Washington left the game with an injury after two carries for minus-8. The Huskies finished with 133 yards, inflated by garbage time.

“That’s the most disappointing thing,” Petersen said. “We’ve got to do a better job running the ball. The defense has its back to the wall, so we got to spark things to keep us alive. It starts and stops with the run game.”

Miles’ last play, a complete debacle that featured a 17-yard sack along with a lost fumble, also included injury. His head was smashed to the turf during the sack, and he was held out because of concussion-like symptoms.

That brought in redshirt freshman Troy Williams for his first collegiate action. He completed five of 10 passes for 37 yards, and ran five times for 28 yards, including a seven yard scramble for a touchdown in which he reversed his field and eluded several tacklers. Petersen had no definitive word on Miles, although he was animated on the sidelines.

There was no doubt about the diagnosis by anyone wearing purple: The massive annual headache was back, throbbing.