The Seahawks dithered too long offensively, were upstaged by the Rams’ special teams plays, and dropped their second game in a row to fall to 3-3. 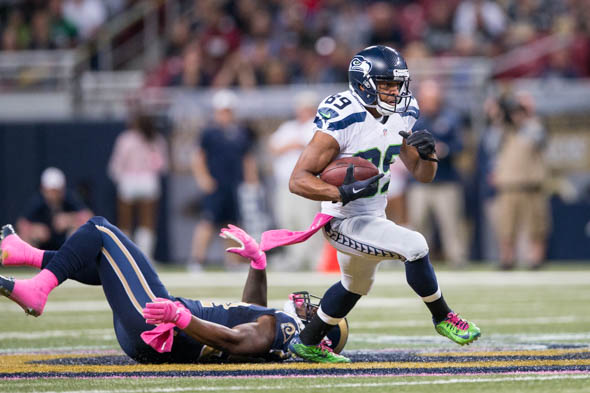 Doug Baldwin had seven catches for 123 yards and a touchdown, but the Seahawks couldn’t overcome an early 18-point deficit and lost 28-26. / Drew McKenzie, Sportspress Northwest

Given one more chance inside the final two minutes, Russell Wilson might have been able to finish off one of the more remarkable comebacks in franchise history and cap, statistically at least, the premier performance of his NFL career. But Wilson didn’t get that opportunity in a game in which Seattle’s hole was ultimately too deep, its misdeeds too many, St. Louis’s chicanery too well-executed.

The Seahawks lost to the last-place Rams 28-26 at the Edward Jones Dome Sunday and fell to 3-3, including 0-1 in the NFC West. History tells us that with that record after six games, their chances of a Super Bowl repeat are virtually nil. The Seahawks have also dropped back-to-back games for the first time since Weeks 7-8 of 2012.

The Seahawks dominated statistically — 463 yards of offense to 272 — and Wilson became the first quarterback in NFL history to throw for more than 300 yards (313) and rush for more than 100 (106) in the same game. He ran 19 yards for a touchdown and threw touchdown passes of 19 yards to TE Cooper Helfet and nine yards to WR Doug Baldwin. Wilson also orchestrated scoring drives of 82, 91 and 80 yards in the last 19 minutes.

Wilson couldn’t overcome an early 18-point deficit, or three huge St. Louis special teams plays, two involving trickery. Nor could he overcome 10 penalties or a missed two-point conversion. Then there was the matter of the efficiency of Rams QB Austin Davis, who began training camp as St. Louis’ fourth-string quarterback, and the replay crew that refused to review a last-minute St. Louis fumble, seemingly recovered by Seattle.

As the Seahawks sputtered offensively, the Rams built a 21-6 halftime lead constructed on the strength of two plays, a 75-yard kickoff return by Bennie Cunningham that set up Tre Mason’s six-yard TD run, and a 90-yard punt return TD by Stedman Bailey, set up by the smoke and mirrors applied by regular returner Tavon Austin.

Austin, faking, moved under the punt toward one sideline while Jon Ryan’s punt actually went left to the opposite sideline awaiting Bailey. No Seahawk checked on the flight of the ball, and Austin didn’t signal for a fair catch. So Bailey caught the ball alone, and practically had solo sailing to the end zone.

After falling behind 21-6, the Seahawks dithered for the first eight minutes of the third quarter before emerging from their fog. Wilson took the Seahawks 82 yards in 12 plays, keeping the march alive by teaming with Baldwin on a 19-yard hook-up on third-and-17, before scoring himself on a 19-yard run to make it 21-13.

Wilson then put together a 91-yard drive. The centerpiece was his own 52-yard scramble, a franchise record for a QB. The drive ended with a 19-yard TD to Helfet. Trailing 21-19, the Seahawks tried for two, but couldn’t convert. Nor could Seattle’s defense, hamstrung by injuries, prevent Davis from making his key play of the game, a 30-yard completion to WR Chris Givens that set up a four-yard TD pass from Davis to TE Lance Kendricks.

Trailing 28-19 with 5:36 left, Wilson took the Seahawks 80 yards, a drive aided by Wilson’s 29-yard completion to Jermaine Kearse, and ending with his nine-yard TD to Baldwin that pulled Seattle within two at 28-26.

The defense forced a punt situation with punter Johnny Hekker nearly in the end zone. The Seahawks presumably would have good field position, and Wilson would have had two minutes to work his magic. But the Rams didn’t punt. Hekker, a former quarterback at Bothell High School, bamboozled thre Seahawks with an 18-yard completion to Cunningham.

Three plays later, with 1:14 to go, RB Tre Mason coughed up the ball on a run for a first down. It appeared that Richard Sherman recovered, but at the discretion of the replay booth there was no replay, officials having determined there was no “clear recovery.”

That leaves Seattle in the poor position of trying to snap a two-game losing streak on the road at Carolina Sunday.

The Rams entered having allowed 30 or more points in four of five games. But the Seahawks couldn’t do anything against them for the half when the game was effectively lost. St. Louis had only one sack after five games (an NFL record). But the Rams sacked Wilson three times in a five-play sequence and hit him 10 times overall. St. Louis has sacked Wilson 22 games in five games.

Marshawn Lynch, who carried only 10 times last week, got 18 touches Sunday for 53 yards, but he had a 27-yard run nixed by a penalty and a TD called back in the fourth quarter.

Wilson’s 52-yard run broke the franchise record by a quarterback held by Jim Zorn, who had a 41-yard run in 1979 . . . Wilson’s 106 rushing yards are the second-highest total of his career, trailing the 122 he had at Washington two weeks ago . . . Wilson’s 300-yard passing game was the fourth of his career and his first since throwing for 310 against New Orleans Dec. 2, 2013 . . . Baldwin caught seven passes for 123 and a touchdown, his first 100-yard receiving game in the regular season since he had 136 against the Giants Oct. 9, 2011 . . . CB Tharold Simon made his NFL debut, drawing the start at left cornerback. He was flagged for pass interference and for a facemask before departing with an undisclosed injury . . . With Percy Harvin traded to the Jets, WR Kevin Norwood also made his NFL debut . . . The punt return TD was the first against Seattle since Brandon Tate of Cincinnati (56 yards) Oct. 30, 2011.

The Seahawks travel to Charlotte Sunday to face the Carolina Panthers at 10 a.m PT Sunday (CBS). The Panthers lost 38-17 at Green Bay Sunday to fall to 3-3-1. The Seahawks launched their run to the Super Bowl in 2013 with a 12-7 win at Carolina.