The Harvin debacle rests with the coach and GM, and its residue compromised the Seahawks’ first half and cost the game Sunday. Feel free to own up, gents. 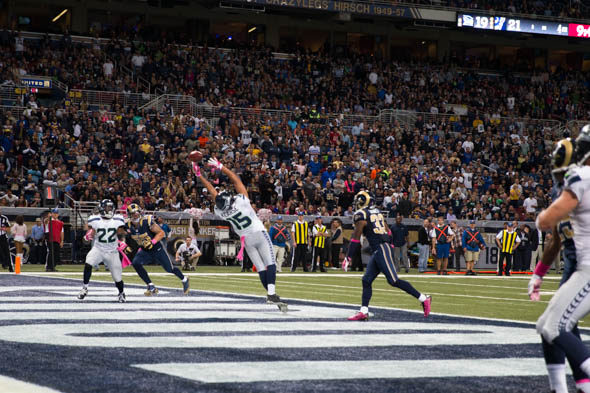 Jermaine Kearse missed a two-point conversion pass that may have been destined for Robert Turbin (22) that would have tied the game in St. Louis Sunday. / Drew McKenzie, Sportspress Northwest

For all the wildness on the field at the Edward Jones Dome in St. Louis Sunday, looming over the preposterousness with the Rams was who wasn’t there.

He would have done little to help the outcome for the Seahawks. But his absence? Yes, that hurt the Seahawks. The national football tumult surrounding the trade of the Seahawks’ most explosive player Friday was a massive distraction.

The players and coaches who deny it will be lying. Just as the they hid the fact that Harvin had become a pain in the ass when it was happening.

At least WR Doug Baldwin came through in the post-game as he did during the game, which the Seahawks lost 28-26 but regained a measure of equilibrium with three blistering touchdown drives in the second that nearly pulled out the game.

“There’s obviously a lot of things that went on this week that affected the team in numerous ways,” Baldwin told reporters. “As a competitor, you don’t want to admit those things. But as a human, it is human nature. It took us a little while to get on track. I’m just proud we responded the way we did and fought until the very end.”

But the ensuing disruption after the firing of a high-profile teammate was undeniable, magnified by texts, emails and calls from nearly everyone they knew, and reporters they don’t know, seeking an explanation.

They also had to spend time figuring out whether to be honest or to hide what they knew. For anyone entrusted with secrets in a very public business, that’s exhausting.

Whether they admit it, they played a first half Sunday that reflected the lack of concentration due to disruption. Embarrassed, the Seahawks recovered splendidly. They still lost, outwitted by the wily Rams coach, Jeff Fisher, with two special-teams whoppers destined for a permanent place in NFL lore.

But the burden for this defeat that drops them to 3-3 and makes a repeat run to the Super Bowl less likely rests largely with management, not players. General manager John Schneider and coach Pete Carroll engineered a high-risk maneuver in March 2013 to acquire a known troublemaker for huge franchise treasure.

Most people, including me, applauded the move, figuring that the club’s track record with personnel earned them slack in the controversial decision. Carroll managed to get seasons, and even careers, out of guys on the margins. Why not the ultra-talented Harvin, the NFL’s offensive rookie of the year in 2009?

As it turned out, they couldn’t manage him. Without knowing all the specific problems, the mere fact that they felt the need to unload him at midseason for a sixth-round pick (not a fourth-rounder, as was reported earlier) speaks to the desperation. After his insubordinate act of refusing to return late into the Dallas game, Carroll knew he had to dump Harvin, even if it meant suspending, then waiving, him before the Rams game.

They mismanaged the asset. They could not find the buttons to push with Harvin to make him an acceptable teammate, and a net asset on the field. Then Friday when news broke of the trade, they left players to sort the mess publicly and privately.

“It was a move we made for our team,” he said. “We’re trying to get better, trying to get things right. We have a lot of depth at receiver. But I don’t know if you can replace a player that special. Anything that happened, we keep to ourselves, and we’ll continue to do that.”

Well, not quite. Making a decision right includes taking responsibility for it, not the generic kind of acceptance where a boss says, “Since I’m the boss, it happened on my watch, so I guess it’s my fault. If I have to.”

Look, I don’t expect Carroll to trash Harvin with a point-by-point denunciation. But I think it’s reasonable to expect a brief description of a cascading series of events that led to the trade.

That can be followed by a simple statement like, “There were things that we asked Percy to do that didn’t get done, for whatever reason. Because that hurt the team, we had to change things, regardless of cost or optics.

“One of the costs was a trade Friday that was emotionally disruptive to the team on the eve of the game. We all saw the effects of that in the first half Sunday. John and I take full responsibility for that. The players should take full responsibility for getting their focus back and getting us to the threshold of a victory under bad circumstances.”

That’s it. No apology needed for acquiring Harvin, nor firing him. His hire was an expensive gamble that didn’t work. And the Seahawks remain the defending Super Bowl champions.

He can even lighten the mood by saying, “Good thing this happened now instead of last year, or we might not have made it through to the Super Bowl.”

That may not sound very funny, but consider that the Seahawks have returned themselves to their favored position: Denigrated underdogs. They’re officially dysfunctional, broken, doubted, and the latest in a long line of post-championship failures in the NFL. The whole Carroll culture is based on gathering the dismissed and empowering them to do the impossible.

I’m betting Carroll will finally will be honest. Because on the Seahawks weekly calendar, it’s “Tell the Truth Monday.” And the Twelves are part of this, true?