Chris Young is the fifth player in Mariners history, first since Gil Meche in 2003, to win the American League’s Comeback Player of the Year award. 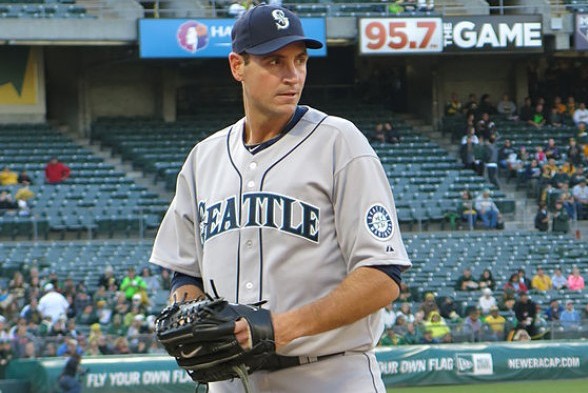 Chris Young won the American League’s Comeback Player of the Year award Monday after going 12-9 with a 3.65 ERA. / Wiki Commons

Chris Young of the Mariners Monday was named the American League’s Comeback Player of the Year by The Sporting News after the 35-year-old right hander went 12-9 with a 3.65 ERA. The 6-foot-10 veteran did not pitch in 2013 after undergoing surgery on his right shoulder, and made only 42 starts from 2009-12 after battling a variety of shoulder issues.

Signed by the Mariners following his release by the Washington Nationals at the end of spring training, Young made 29 starts for the Mariners and worked 165 innings, his most since 2007.

“I am extremely honored to be named Comeback Player of the Year by the Sporting News,” said Young in a press release. “There are many deserving players who have demonstrated the commitment, dedication and perseverance to overcome similar obstacles and I am humbled to be recognized amongst them.

“The life lessons I have learned throughout this experience are invaluable and will stay with me the rest of my career. Furthermore, I hope that I can serve as inspiration to other players in the same manner in which I was inspired to pursue my comeback. I am extremely grateful to my teammates, coaches, the Seattle Mariners organization and my family, as each and every member contributed to my success.”

“Chris was a big part of our success in 2014, really solidifying our rotation,” said manager Lloyd McClendon. “To think he won as many games as he did, and made 29 starts, coming off the type of surgery and the injuries that he had, I think it’s just tremendous. He is a tireless worker and showed his determination with his performance. This is a very deserving award for him in every way possible.”

Casey McGehee of the Miami Marlins won the National League Comeback Player of the Year award.

The Mariners RBI Club Monday conferred its top community service award on outfielder Michael Saunders. The Moose Clausen Award is given to a member of the Mariners organization (active or retired) for significant contributions to the community. This year’s award is being presented to Saunders in recognition of his community service to the Seattle area.

Saunders is involved with the Fred Hutchinson Cancer Research Center and Major League Baseball’s “Going To Bat Against Breast Cancer” initiative. Saunders also spends time during the offseason on the Mariners Caravan talking with elementary school students about education and staying drug-free and visiting children at Boys & Girls Clubs.