Russell Wilson made history Sunday at St. Louis, but the last-place Rams made some of their own in a 28-26 decision over the 3-3 Seahawks. 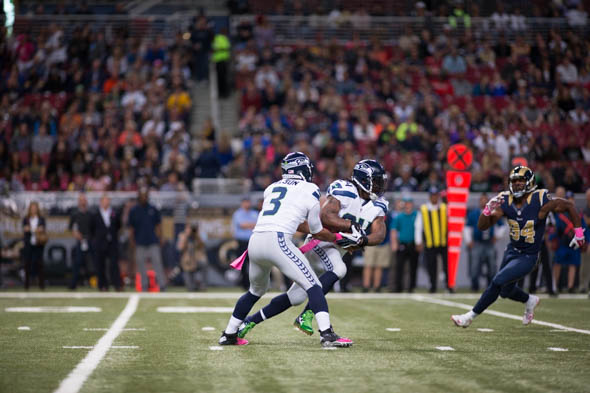 Russell Wilson, handing off to Marshawn Lynch Sunday, is the first quarterback in NFL history to pass for 300 and run for 100 yards in the same game. / Drew McKenzie, Sportspres Northwest

On a day when Denver’s Peyton Manning set the NFL record for career touchdown passes (510), Russell Wilson made history of his own by becoming the first quarterback ever to pass for more than 300 (313) and rush for more than 100 (106) yards in the same game. While Manning landed, deservedly, on all of the Monday morning network TV shows, Wilson didn’t even rate a lovely parting gift.

The two records are hardly equal, but Wilson’s is at least quirky enough for discussion. And 300-100 wasn’t the only arcane history Wilson made.

Two weeks ago, Wilson set a Monday Night Football record by rushing for 122 yards in a 27-17 victory over the Washington Redskins. Coupled with his 106 at St. Louis Sunday, Wilson is only the third quarterback in the Super Bowl era (since 1966) to produce multiple 100-yard rushing games on the road in a single season, joining Chicago’s Bobby Douglass in 1972 and Atlanta’s Michael Vick in 2004.

Impressive as it was, Wilson’s 300-100 feat Sunday didn’t translate into a Seahawks victory because the Rams out-witted the Seahawks with some remarkable history of their own. But more about that in a moment.

With Wilson alone in the 300-100 club, we wondered which quarterbacks before Wilson came closest to the feat. Ranking is according to rushing yards (the closest such performance to Wilson’s in Seahawks history occurred Sept. 3, 1978 when Jim Zorn passed for 329 and ran for 54 in a 24-20 loss to San Diego):

Of the quarterbacks listed, the only real surprise is Gannon, hardly in the athletic mold of the others. The other takeaway is that these types of games rarely end up winning ones for the quarterback involved. Vick, for example, came close to 300-100 three times, but his teams won only once. Vick couldn’t even produce a victory for Philadelphia with a 416-75 performance in 2011.

Wilson might have done it Sunday, but ran out of clock once punter Johnny Hekker completed an 18-yard, fourth-down pass to Benny Cunningham with 2:10 to play, one of three special teams plays that helped sink the Seahawks. Seattle now seeks to become only the seventh team since 1966, and first since Green Bay in 2010, to reach the Super Bowl after starting a season 3-3.

No maker of odds thought the Rams would beat the Seahawks, not after the NFC’s last-place team allowed 30 or more points in five of six games, and especially after they set an NFL record for fewest sacks (1) in the first six games of a season.

But oddsmakers didn’t – and couldn’t – envision three significant developments: The blowback that the Percy Harvin trade would have on the Seahawks in the first half when St. Louis had three sacks in a five-play sequence (see Thiel: Put Seahawks’ Loss on Carroll, Schneider), Cunningham’s 75-yard kickoff return that set up a touchdown, and Stedman Bailey’s 90-yard chicanery-laced punt return TD.

The Rams have been in the NFL for 78 seasons, playing in three different cities, Cleveland (1937-45), Los Angeles (1946-94) and St. Louis (1995-14). Never before, according to Elias Sports Bureau, had they had a game that included kickoff and punt returns of at least 75 yards each. That covers nearly 1,100 games. Leave it to a Seattle team to be standing in an intersection when a semi blows through.

Coming directly on the heels of the Harvin trade, the greatest waste of money and resources by any franchise in Seattle pro sports history, the Seahawks simply found themselves on the wrong end of history, and not only because of the unlikely returns by Cunningham and Bailey. They were also on the wrong end of some Austin Davis history, astonishing when taking into account that Davis started training camp as the No. 4 quarterback on the St. Louis depth chart.

Davis went 9-for-9 in the first half, becoming the first quarterback since Josh Freeman to record a perfect completion percentage in a half against Seattle. Freeman went 11-for-11 in the second half of the Seahawks’ 38-15 loss to Tampa Bay in Week 16 of the 2010 season.

Davis finished 18-for-21 (two touchdowns, no interceptions), a completion percentage of 85.7. Only one other quarterback in 38 years had a higher single-game completion percentage against the Seahawks. That was Brett Favre, who went 22-for-25 – 88 percent – for the Vikings in 2009. The oddity here: both Davis and Favre played college football at Southern Mississippi.

Favre is not yet in the Hall of Fame, but over the years the Seahawks have faced 12 quarterbacks who are. This is how Davis’ game Sunday compares to the top six Hall of Famers against Seattle in terms of single-game completion percentage:

Or put another way, Terry Bradshaw, Bob Griese, Dan Marino, Warren Moon, Jim Kelly and Steve Young never put up the completion numbers against Seattle that Austin Davis did. Neither did future Hall of Famer Manning, who had a 75.6 mark (31-for-41) for Indianapolis in 2009.

A walk-on at Southern Mississippi and undrafted in 2012, Davis threw for 152 yards and two touchdowns against the Seahawks for a passer rating of 128.6. Opposing quarterbacks now have a 103.7 passer rating against Seattle (12 touchdowns, two interceptions).

Last year, the Seahawks allowed a passer rating of 63.4, lowest in the NFL.