Huskies’ plan is to start QB Miles vs. Arizona St.

Despite an apparent concussion against Oregon, Huskies QB Miles is in line to start against Arizona State Saturday. Questionable are RBs Coleman and Washington. 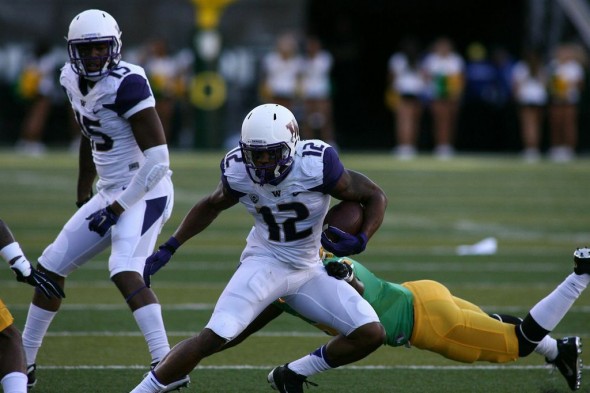 RB Dwayne Washington started Saturday at Oregon but was injured after two carries and may not make the Arizona State game. / Gary Breedlove, Sportspress Northwest

University of Washington quarterback Cyler Miles had concussion-like symptoms after being taken out of the loss to Oregon, but that probably won’t keep him from returning for Saturday’s home game against No. 14 Arizona State (7:45 p.m., ESPN).

“The plan is that (Miles will start),” UW coach Chris Petersen said Monday. “But we’ll take it one day at a time with him.”

While Miles’ concussion will be evaluated, the redshirt sophomore’s job isn’t in jeopardy after he went 19 of 28 for 147 yards, one touchdown, one interception and a fumble against the Ducks. Following both turnovers, Oregon’s offense responded by scoring a touchdown in a 45-20 rout.

“Against a team like Oregon when you turn it over twice, that can be backbreaking,” Petersen said. “You hate to say that, but when you’re playing a really, really good team, you have to play really, really good. Those two turnovers really hurt. He did do some good stuff. He didn’t play as clean as we probably needed him to.”

Miles was forced to leave early in the fourth quarter after he was sacked and fumbled. Instead of bringing in QB Jeff Lindquist, the starter for the season opener against Hawaii, Petersen inserted redshirt freshman QB Troy Williams.

With the Ducks leading 42-13, Williams responded by leading the Huskies on a 17-play, 75-yard drive that he capped with a seven-yard touchdown run. On the score, Williams reversed direction and outran Oregon’s defense.

“I’m always anxious to see a backup quarterback get in there. I think sometimes it’s scary,” Petersen said. “But it was awesome to see what Troy did when he did get his chance to go in there. He made some things happen. He threw some good balls and he ran around when stuff wasn’t there.”

While intriguing, Williams’ garbage time production — he completed five of 10 passes for 37 yards and ran five times for 28 — wasn’t enough to convince Petersen that Williams is a better option. The coach also shot down the idea of letting Williams play for a series, then reinserting the incumbent.

“I don’t think we’ve got to that point yet,” Petersen said. “You start getting into the rotating quarterbacks and that type of thing and I don’t think any coaches really love to do that.”

Coaches don’t love it when three of their running backs expected to play are banged up either, but that’s the predicament the Huskies (5-2, 1-2 Pac-12) face for Saturday’s matchup against a Sun Devils team (5-1, 3-1 Pac-12) coming off a convincing 26-10 win over Stanford.

Freshman RB Lavon Coleman was forced to leave the Oregon game with a shoulder injury, while sophomore RB Dwayne Washington had to leave with a chest injury. Petersen hopes both will be available, but indicated that Coleman is closer to ready. RB Jesse Callier is already out for the season with a ruptured Achilles tendon.

The majority of carries could go to senior RB Deontae Cooper. That’s incredible, considering Cooper missed his first three seasons at UW because of major knee operations. Saturday, he rushed five times for 23 yards and led all Huskies by catching six passes for 48 yards and a touchdown.

Is he finally fully recovered?

What to do with Kasen?

WR Kasen Williams is having a nightmare senior season after his junior year ended last October at Husky Stadium when he sustained a Lisfranc injury to his left foot.

Through seven games in 2014, Williams has six catches for 47 yards and one touchdown.

“I don’t know. We tried to move him a little bit more inside as an inside slot receiver. Tried to get him the ball outside. It’s a hard one,” Petersen said. “I know you guys ask that every week and we do, too.”

Petersen indicated that Williams, a Skyline High School (Sammamish) product, might not be fully recovered from his injury.

“I think that was a pretty significant injury. I wasn’t here before,” he said. “I’ve seen tape and all those things but I know it’s a factor. I can say that.”