Travis Ishikawa, state player of the year for Federal Way HS in 2002, is a star again, this time for a home run that helped launch the San Francisco Giants into the World Series. 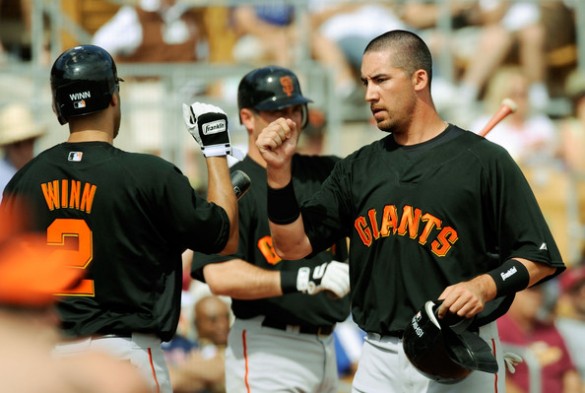 Eric Fiedler knew he had to make the phone call. After nine years as the head baseball coach at Federal Way High School, he accepted the same position in small-town Enumclaw in eastern King County.

He wasn’t sure how Travis Ishikawa would handle the news.

“One of the first people I called was Travis,” Fiedler said earlier this week by phone. “I was very nervous about making that phone call because what you’re seeing about Travis is legitimate. He’s loyal. I knew he wouldn’t take it very well. That phone call was a tough one.”

That was about a decade ago, the conversation during a trip Fiedler took with his former assistant coach Danny Graham, and their wives, to Pullman to watch a pair of former players pitted against each other in the baseball version of the Apple Cup.

A few years had passed since Ishikawa, a 2002 Federal Way graduate, finished his decorated high school career, in which he led the Eagles to the 4A state title in 2001 and a runner-up finish as a senior.

Drawing comparisons to former Mariners first baseman John Olerud, he was offered nearly a full-ride scholarship to Oregon State — a rarity in college baseball — but signed with the San Francisco Giants after they chose him in the 21st round of the 2002 MLB draft and offered a $955,000 signing bonus.

“He struggled a little bit as a sophomore but his junior and senior seasons he just took off. We hit him leadoff,” Fiedler said, noting that Ishikawa led the JV team in strikeouts before being called up to varsity to play first base during his sophomore season. “He hit with power. I think he had probably 15 home runs his junior and senior year combined.”

A week ago, Ishikawa, 31, was labeled a classic MLB/Triple-A tweener — good enough to earn late-season promotions and fill a platoon role at first base, but unable to hold down for long a spot on any roster. Through seven MLB seasons, he traveled among the Giants, Brewers, Orioles, Yankees (one game) and Pirates, playing more regular season games in the minor leagues (923) than in the bigs (444).

That designation will be forever lifted after Game 5 of the National League Championship Series, when Ishikawa etched his name into baseball history by hitting a walk-off, three-run homer in the Giants’ 6-3 win over the Cardinals. The blast sent San Francisco to the World Series — and a 1-0 lead after a 7-1 win over Kansas City on Tuesday — and Federal Way High School into a tizzy.

About 800 miles away, Fiedler, home from coaching his middle school baseball team,  watched the blast from his “man cave” upstairs after eating dinner with his family.  His wife and daughter watched downstairs, though he said the televisions were separated by a five-second delay. The family wasn’t apart for much longer.

“I started jumping around and screaming and all of a sudden my wife and daughter are screaming,” Fiedler said. “A lot of hugs, a lot of tears, and a lot of disbelief.”

Disbelief might be the operative word — especially after Ishikawa spent most of 2013 splitting time in Triple-A between the Orioles and White Sox organizations, began 2014 with the Pirates, then was cut in late April when they traded for former Mets first baseman Ike Davis. Ishikawa signed with the Giants, though it didn’t prevent him from contemplating retirement.

He endured over the next few months at Triple-A Fresno before landing a promotion to San Francisco in late July. Injuries to former Mariners OF Michael Morse, amid a breakout season, and center fielder Angel Pagan increased his playing time.

Ishikawa was productive in 47 games, batting .274 with two home runs and 15 RBIs. Productive enough to convince Giants manager Bruce Bochy that he was the best option in left field despite playing first base his entire career.

Citing Ishikawa’s speed, Fiedler recalled telling him in high school: “Ya, know, Travis, at the next level you could transition into the outfield.”

The past week, the switch helped put him in position to face Cardinals right-hander Michael Wacha in the NLCS. Tied at 3 with two runners on, Ishikawa jumped ahead to a 2-0 count. Fiedler said television cameras panned to Wacha shaking off a pitch, perhaps to fool him into thinking he was throwing something besides a fastball. It’s a common strategy Fiedler has his high school pitchers use.

“I asked Travis, ‘Do you really think he was trying to bust you on 2-0 pitch and Travis said, ‘No way,’ ” Fiedler said, recalling a phone conversation the pair had Friday.

The two have remained close since Fiedler moved to Enumclaw. The phone call?

It was much happier than the one a decade ago.

“He’s the guy you always dream about being the hero,” Fiedler said. “Tiger Woods and A-Rod — they burned us as sports fans. Travis is legitimate. He’s a guy that you just hope good things happen to.”